An Iraqi man is on trial in a German court for human trafficking and genocide against the Yazidis. 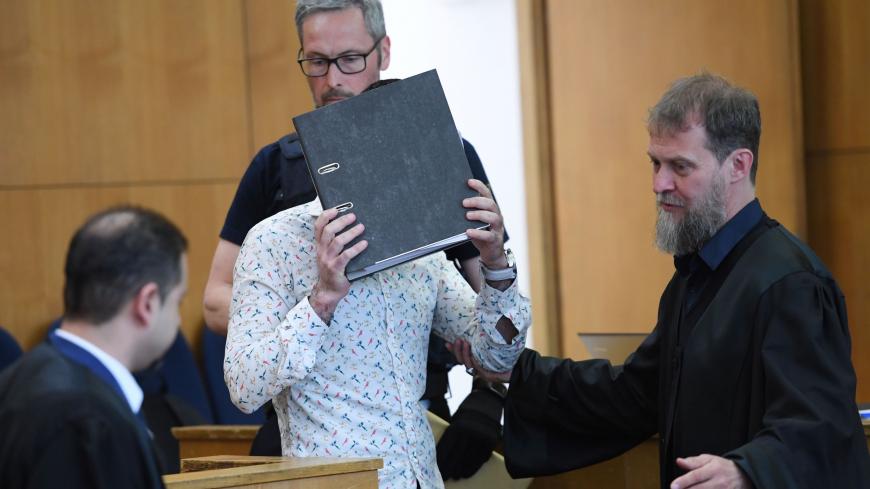 Defense lawyers Serkan Alkan (L) and Martin Heising (R) look on as the Iraqi defendant, identified only as Taha Al-J, believed to have belonged to the Islamic State (IS) jihadi group, hides his face while arriving into the courtroom for the start of his trial for genocide and murdering a young Yazidi girl whom he held as a slave, April 24, 2020, at the Higher Regional Court in Frankfurt. -

Over 2,000 miles away from former Islamic State (IS) territory in Iraq, a court in Frankfurt, Germany, began Friday what's considered the world’s first trial for genocide against the Yazidi religious minority.

The suspect, identified only as Taha Al-J under German privacy laws, is a 37-year-old Iraqi national extradited from Greece to Germany in October 2019. According to the indictment, he purchased and enslaved a Yazidi woman and her 5-year-old daughter in the summer of 2015.

Prosecutors allege Taha Al-J brought the mother and daughter to the IS-occupied Iraqi city of Fallujah, where he forced them to convert to Islam and regularly deprived them of food and water. To punish the girl for wetting her bed, Taha Al-J chained her to a window outside and let her die of thirst in the desert heat, prosecutors say.

The suspected IS militant stands accused of crimes against humanity, war crimes, human trafficking and, notably, genocide. His wife, a German national who joined IS, is being tried separately in Munich.

If convicted, they both face a maximum sentence of life in prison.

The path to justice and accountability for the Yazidis has been nearly six years in the making. IS viewed the Yazidis as devil worshippers and tried to wipe out the Kurdish-speaking minority in the summer of 2014.

IS swept through the Yazidi ancestral homeland of Sinjar in northern Iraq and executed thousands of men, their bodies thrown in mass graves. Many more women and children were abducted and sold in slave markets across IS-held territory. Some 2,800 Yazidis remain missing, with most feared dead from coalition airstrikes or killed by their captors.

IS made no secret of its intention to exterminate the group, and the United Nations, US and European governments have all said the systematic ethnic cleansing campaign constitutes a genocide.

But prosecuting an individual member of IS with genocide — defined under a 1948 UN convention as “acts committed with the intent to destroy, in whole or in part, a national, ethnic, racial or religious group” — could be difficult to prove.

“Genocide is the hardest crime of all to prosecute,” said Aldo Zammit Borda, a senior international law lecturer at Anglia Ruskin University in the United Kingdom.

“In addition to proving the physical acts, for example, the killing or sexual slavery, the prosecutors will have to prove beyond a reasonable doubt what is known as a specific intent — that the acts were conducted with the specific intent of destroying the Yazidis,” he said.

Zammit Borda said the main challenge for the prosecution will be to prove that the individual shared in the terror group’s general intent to destroy the Yazidis. Without direct evidence, prosecutors will need to do so circumstantially based on what he said and how he acted. The fact that the alleged crimes were committed thousands of miles away will make it all the more challenging.

Without a Nuremberg-like international tribunal to try IS suspects, Germany turned to its broad universal jurisdiction law, which allows for the prosecution of heinous crimes committed abroad, regardless of whether the suspects or victims are German nationals.

Federal prosecutors used the same principle in an unrelated trial this week against two Syrian regime officials accused of crimes against humanity, specifically the torture of anti-government detainees.

Despite the first-of-its-kind, high-profile trial in Frankfurt, justice remains elusive for the thousands of Yazidi survivors who fear they will never have their day in court.

“Each trial is a success,” said Pari Ibrahim, executive director of the advocacy group Free Yezidi Foundation. “However, we should also bear in mind that there are tens of thousands of perpetrators.”

In northeast Syria, the Kurdish-led authorities are holding about 10,000 suspects, the vast majority of whom are Iraqi and Syrian nationals. An estimated 800 are from European countries whose governments have been slow or unwilling to bring them home for prosecution.

Iraq, meanwhile, has doled out thousand of convictions in hasty trials that rights organizations say lack due process. Rather than bring specific charges such as rape or murder, judicial authorities have primarily prosecuted IS suspects for membership in a terrorist organization.

Even in the German case, there are limitations: Gendered crimes, including sexual violence and sexual enslavement, are not explicitly recognized in the charges.

“You’re talking about charges of ‘purchasing’ women,” said Radhakrishnan. “It’s important to call the crimes what they are and hold them accountable for what they are.”

Without accountability, there can be no healing, say Yazidi advocates. With much of their homeland in ruins, many Yazidis remain in tents and other makeshift homes across northern Iraq, while their perpetrators walk free.

“Victims would like to see them all face meaningful justice," said Murad Ismael, executive director of the Yazidi rights group Yazda.

“That is the least the world can do.”