How this young Yazidi is bringing hope to IS victims

Pari Ibrahim, a young Yazidi women living in the Netherlands, established the Free Yezidi Foundation to highlight the stories of victims of this Iraqi community at the hands of the Islamic State. 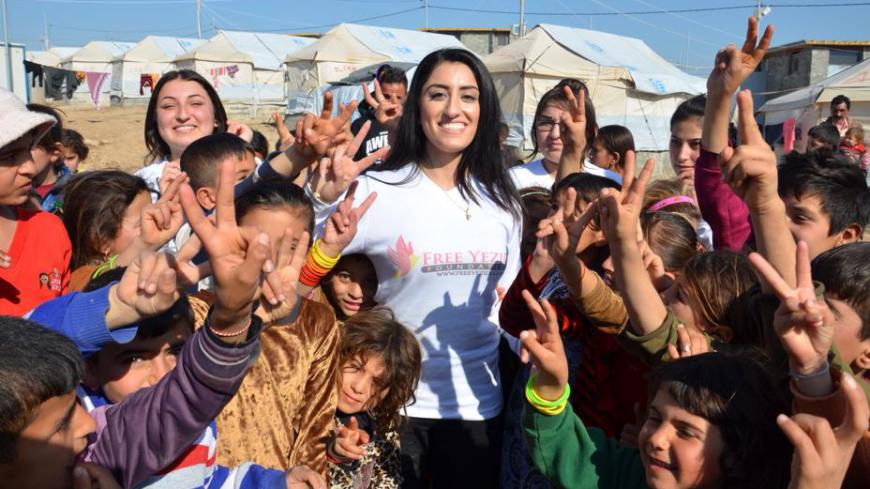 AMSTERDAM — Pari Ibrahim, 27, was a regular law student in the Netherlands who had a job in a library until she received a phone call at 5 a.m. in August 2014 that would change her life forever. A family member from northern Iraq called to inform her that the self-proclaimed Islamic State (IS) had invaded Sinjar and had killed the men and kidnapped the women and children. “We are being massacred, we are heading for the mountains,” the family member said.

Ibrahim, who belongs to the Yazidi community, had fled Iraq with her parents in the 1990s and now lives in the Netherlands. After receiving the phone call, she frantically started searching the internet for information, but was not able to find news. Slowly it became clear what had happened in Sinjar. Thousands of Yazidi men had been killed or disappeared and 6,000 women and children had been enslaved by IS, including 19 females and 21 males who are Ibrahim’s relatives.

The women and girls, some as young as 9, were traded and sold as sex slaves, the boys were forcibly converted to Islam and were brainwashed to serve as fighters. The men were massacred and dumped in dozens of mass graves. To separate the boys from the men, IS militants looked at their armpits — if they had hair, they were killed, Ibrahim explained to Al-Monitor.

From that moment onward, Ibrahim decided to fully dedicate herself to the plight of the Yazidis.

That was the moment the Free Yezidi Foundation was born. She added, “At some point, Gucci found out about our initiative and donated $120,000. This came as a gift from heaven as it allowed us to start various projects, such as opening women and children's centers.”

The Free Yezidi Foundation is one of the two leading foundations (the other is called Yazda) founded by the Yazidi diaspora. In the Kurdistan Region of Iraq, the group opened centers for Yazidi women and children and flew in a trauma specialist to assess future provision of mental health care. The organization also lobbies with governments to raise awareness for the plight of the Yazidis and to lobby for an intervention to save the more than 3,200 women still enslaved by IS. Ibrahim travels the world to tell people what happened to the Yazidis. She spoke at the UN Security Council and the House of Lords and has been interviewed by many media outlets, including the BBC.

“Recently, we heard that 19 girls were locked in cages and burned alive for refusing to have sex with IS fighters. We heard this from some locals who phoned their relatives in northern Iraq, although still we do not have the details confirmed,” Ibrahim said.

Shortly after the massacre and enslavement, IS released an issue of its online magazine Dabiq in which it explained the enslavement of the Yazidis, whom they call “devil worshippers.” Enslavement is the appropriate treatment of “pagan” women, according to Sharia, IS argued.

In a chilling passage, it said, “Enslaving the families of the kuffar [unbelievers] and taking their women as concubines is a firmly established aspect of the Sharia that if one were to deny or mock, he would be denying or mocking the verses of the Quran and the narrations of the Prophet, and thereby apostatizing from Islam.”

Together with Yazda, the Free Yezidi Foundation started a mission to ensure justice is served on behalf of the Yazidi community. In September 2015, the organizations delivered a report to the International Criminal Court (ICC) in The Hague on the involvement of foreign fighters in war crimes and crimes against humanity, such as genocide, sexual slavery and other crimes. Their goal is to prosecute IS, in particular foreign fighters.

Around 6,000 jihadis from Europe have joined IS in Iraq and Syria. A substantial number of them have returned, of whom many have not been prosecuted and are still freely walking the streets. Prosecutors in Europe often face difficulties finding legal evidence that fighters have been involved in war crimes and thus found it difficult to bring cases against them.

According to Ibrahim, there is evidence that foreign fighters have been involved in the crimes of genocide and sexual slavery, as many victims have testified. The Free Yezidi Foundation would like to link testimonies of Yazidi survivors to individual cases of foreign fighters to make prosecution possible. Also, the organizations are working on decoding the IS hierarchy as fighters from the West occupy lower, middle and higher ranks within the terrorist organization.

Ibrahim gave an example: “We were able to prove the involvement of three foreign fighters in war crimes, but all three were killed. However, we know that many more have been involved, such as German and French jihadis. And it is a fact that many foreign fighters have returned to the West.”

Recently, she was informed that some countries in the West are trying to start a case against their foreign fighters as well. “I can’t give you the details right now. We will hear more about this in the future,” she said. One of the reasons why it is also important to have suspects prosecuted by the ICC instead of national courts is because the Yazidis have little faith in the Iraqi justice system, which, according to Ibrahim, is chronically corrupt. Also, she hasn’t heard anything from the Iraqi government yet when it comes to prosecuting foreign IS fighters.

“You can buy your way out of jail in Iraq if you know the right people,” she added. “Yazidis do not trust anyone anymore.” Seeking justice for the Yazidis through the ICC is going to be a long and complicated process, which will probably take years. So far, the ICC has not even opened a preliminary investigation, which is needed to open the case. However, the Yazidi community has hope that this will happen.

“Even if we manage to convict one person, it will be worth the effort. We want recognition and justice,” Ibrahim said.

She added that only two females from her family managed to escape the terror group. The rest of her relatives are still missing.

“The women have been sold and traded as sex slaves. We don’t know what happened to the men. Maybe they have been killed and dumped in mass graves, or maybe IS took them,” she said.