Iraq's Yazidis say the threat from the Islamic State and other extremist groups is preventing them from returning home. 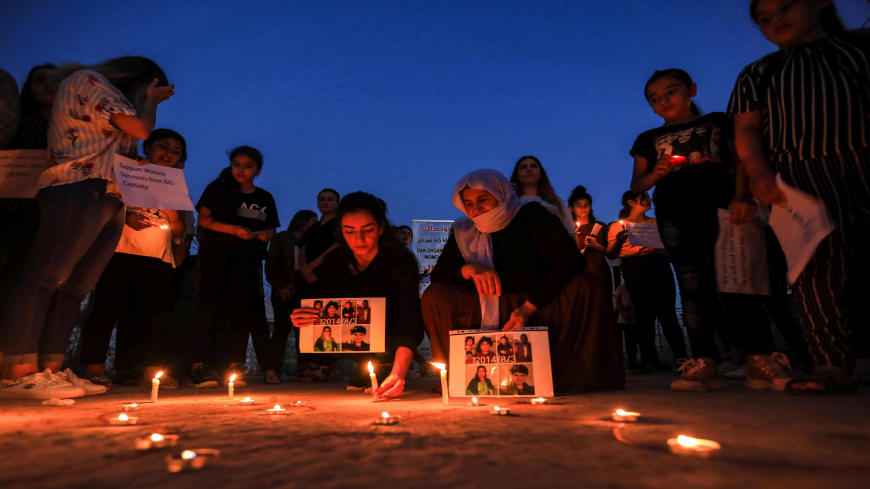 Iraqi Yazidis attend a candlelight vigil in the Sharya area, some 15 kilometers from the northern city of Dohuk in the autonomous Iraqi Kurdistan region on Aug. 3, 2020, marking the sixth anniversary of the Islamic State (IS) group's attack on the Yazidi community in the northwestern Sinjar district. - SAFIN HAMED/AFP via Getty Images

The United States must take “bolder action” to address threats posed to the Yazidis, a US religious freedom official said Monday, as Iraq’s long-persecuted minority marked the sixth anniversary of the terrorist rampage on their homeland.

“The US government cannot rest with just providing humanitarian aid to the Yazidis and other religious and ethnic minorities, as essential as that assistance may be," said Nadine Maenza, a commissioner at the US Commission on International Religious Freedom, a bipartisan watchdog group.

“It must also act decisively to push back against the regional forces that threaten the safety and security of those very communities,” she said at a virtual panel hosted by advocacy group Free Yezidi Foundation.

In the six years since the Islamic State (IS) stormed their towns, killed their men and enslaved their women and children, Yazidi activists say little has been done to ensure that it will never happen again. More than 2,800 of the women and children taken captive in August 2014 remain missing, with many feared dead. Those who survived what the United Nations now calls a genocide and who now live in camps scattered along northern Iraq are trapped in poverty.

“We need to as an international community, and the United States is committed to this, help in rebuilding,” said Sam Brownback, US Ambassador-at-Large for International Religious Freedom.

Speaking at an event hosted by advocacy group Yazda, Brownback said the Donald Trump administration had put forward an “aggressive plan” to rebuild the Yazidi ancestral homeland of Sinjar, citing nearly $300 million in financial aid pledged to vulnerable groups in Iraq since 2017.

But despite financial assistance from the United States and other governments, only a fraction of Sinjar’s original inhabitants have returned. The mountain town has been free of IS since 2015, and yet it is still littered with landmines and booby traps. Reliable electricity and safe drinking water are scant. Some 200,000 Yazidis are displaced, unable to return to what’s left of their homes — 70% of which the United Nations says was destroyed by the terrorist group.

The ever-present threat of Iran-backed militias, a resurgence of IS activity and recent Turkish airstrikes against Kurdish militant targets on Sinjar Mountain also have many former residents fearing a repeat of the August 2014 massacre should they leave the relative safety of the camps.

“Dangers face Yazidi families from every direction,” Free Yezidi Foundation wrote in a statement. “The international community may be hesitant to offer permanent military support in this area, but the coalition can and should take some symbolic actions in Ninevah province to demonstrate its support.”

Disputed areas between the central government and the Kurdistan Regional Government, including Sinjar in Ninevah province, are especially vulnerable to militant attacks. Remnants of IS have exploited the security vacuum to carry out an increasing number of insurgent attacks against civilians and security forces in the past year.

The Yazidis also point the finger at Turkey, which regularly targets the Kurdistan Workers Party in northern Iraq. The Kurdish militants are viewed by Ankara as a threat to its national security and were on the receiving end of airstrikes in Sinjar this June. In addition, parts of northeast Syria that are home to a smaller population of Yazidis were overrun by Turkey’s allied rebel fighters in recent years, who rights groups have accused of carrying out rape, kidnappings and forced conversions of locals.

“Security is the No. 1 issue,” said activist Murad Ismael, recalling how the Yazidis were left defenseless when IS stormed their towns six summers ago. In the absence of meaningful military protection, Ismael called on the international community to provide training and logistical support to local forces.

“We will have to be holding the weapons when the next IS comes,” he said.