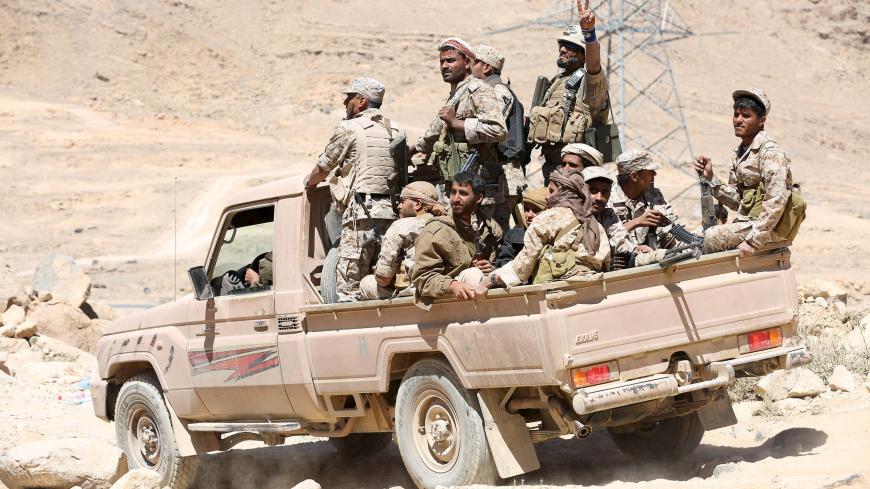 Pro-government army soldiers ride on the back or a truck in Fardhat Nahm area, which has recently been taken by the army from Houthi rebels around 60 kilometers (40 miles) from Yemen's capital, Sanaa, Feb. 20, 2016. - REUTERS/Ali Owidha

Some observers, however, believe the Houthis' success might have been due at least in part to Saudi Arabia putting its own interests ahead of winning the battle.

The operation succeeded Jan. 26 after less than a week, taking over nearly 2,000 square kilometers (1,243 square miles) mostly consisting of mountains and rugged terrain. This means that any force's attempt to return to the land will require time, effort, money and sacrifice.

Because of Nahm's strategic and geographic importance, the Houthis have fought several fierce battles for the area over five years against the forces of the UN-backed government of exiled President Abed Rabbo Mansour Hadi. Despite intermittent calm, the battles kept reigniting, with neither side able to impose full control.

By capturing Nahm, the eastern gateway to Sanaa, the forces of the Houthi National Salvation Government secured all paths leading to the capital. During this recent battle, Mohammed Ali al-Houthi, a member of the Houthi Supreme Political Council, described Nahm on Twitter as “the most important front in the Sanaa governate."

With the fall of the Nahm front, stretching more than 35 kilometers (21 miles), the Houthis warded off a major threat they have faced since the war began in March 2015.

Moreover, the Houthis — officially known as Ansar Allah — now control the chain of highlands overlooking the provinces of al-Jawf and Marib, most notably a strategic rim of the Yam Mountains and the camp of Hadi's 312th Armored Brigade. This position gives them an advantage in monitoring and controlling fire lines along these areas.

Maj. Gen. Abdul Khaliq Badreddin al-Houthi, commander of the central military area in Sanaa, told the Houthi-affiliated al-Masirah TV Feb. 2 that the operation was “successfully competed in six days in a large and complex geographical [area].”

At the political level, the minister of foreign affairs in Hadi's government, Mohammed al-Hadrami, had hinted Jan. 23 at a withdrawal from a 2018 cease-fire agreement regarding the port city of Hodeidah. In a press statement, he called the situation "dysfunctional" and said that “the Stockholm Agreement on the city of Hodeidah provided a cover for the Houthis’ escalation in the Nahm district.”

The recent fall of Nahm was linked to the Houthis' ability to take advantage of several local and regional developments, most notably the period of calm between Saudi Arabia and the Houthis. Talks between the two parties have been held in Oman since November. Also affecting the situation, the United Arab Emirates — part of the Arab coalition — pulled troops out of Yemen, and Hadi's government and the separatist Southern Transitional Council (STC) signed a power-sharing deal known as the Riyadh agreement.

Abdel Bari Taher, former head of the Yemeni Journalists Syndicate, told Al-Monitor the situation in Nahm is clearly linked to the dispute between the UAE-backed STC and Hadi's government over the execution of the Riyadh Agreement. This offered Houthis an opportunity to exploit the recent developments.

“What happened in Nahm is the result of the [UN-backed] government’s attempt to cleanse Aden and Shabwa of the Emirati-backed [STC's] militia. This confirms that Abu Dhabi is continuing to support the secession of Southern Yemen from its north," Tawaf told Al-Monitor.

“The lack of quality weapons and Patriot [missiles] enabled the Houthi militia to bomb civilians in Marib and the camps,” he said. He argued that the absence of the Saudi-led coalition air force enabled the Houthis to advance in areas that had been controlled by Hadi's forces for several years. “But Saudi Arabia will not allow such policies, which could undermine all previous efforts to support the legitimate government and restore the Yemeni state from the grip of Iran's militia in Yemen," Tawaf added.

For his part, Abdul Ghani al-Zubeidi, an expert in political and military affairs close to the Houthis, revealed that Qatar had mediated after the battle for Nahm, to keep Houthis from advancing toward Marib province. He attributed the fall of Nahm to the division between Hadi’s forces and those of al-Islah political party (Yemen’s Muslim Brotherhood).

“Al-Islah controls most key and influential [government] positions, especially since leaders sympathizing with Hadi were recently replaced by leaders sympathizing with al-Islah," he told Al-Monitor. “The plans of Ansar Allah’s opponents were based on offense rather than defense. Also, the Houthis’ intelligence capabilities played a crucial role. Houthis were able to break into the communications system of Hadi's forces and reach their operations rooms.”

It's obvious that after five years of continuous fighting in Yemen, the Arab coalition still doesn't trust some forces of Hadi’s government — those that were deployed near Sanaa in the Nahm battle as well as in Marib and al-Jawf provinces. These forces are mostly affiliated with al-Islah, according to Issa bin Ablan al-Mazrouei, deputy chief of staff of the UAE armed forces and joint operations commander in Yemen.

Mazrouei spoke at a Feb. 9 reception for UAE forces returning from Yemen, and asserted that his country was fighting three enemies in Yemen: the Muslim Brotherhood, al-Qaeda and the Islamic State.

A military source with Hadi’s government spoke to Al-Monitor on condition of anonymity: “There has been slight [intentional] negligence on the part of the coalition in the recent battle of Nahm. This aimed to pressure the military leadership affiliated with al-Islah to restructure the army in Marib and al-Jawf close to Nahm."

This includes changing major commanders such as military brigade commanders, chiefs of staff and operations within brigades, and battalion leaders such as operational and field units.

The forces of Tareq Saleh and Sagheer bin Aziz are political affiliates with the General People's Congress party, which was founded and chaired by late President Ali Abdullah Saleh. These forces advocate a civil state and are far from Islamic ideologies such as the forces of al-Islah and the Shiite Houthis.

The journalist Taher said there is no doubt the Arab coalition is trying to weaken all Yemeni parties. At every stage of the conflict, it has sought to rearrange the situation politically and militarily through settlements among its allies and by repositioning these allies to perpetuate the cycle of advances and retreats.

The course of events since the coalition’s intervention has proven that it is mainly seeking to secure Saudi borders and its strategic interests in Yemen.