The Houthis have taken over much of al-Jawf and Marib provinces and secured their main stronghold in Saada, expanding the Saudi border areas they control and gaining a short military path toward the source of wealth in Marib. 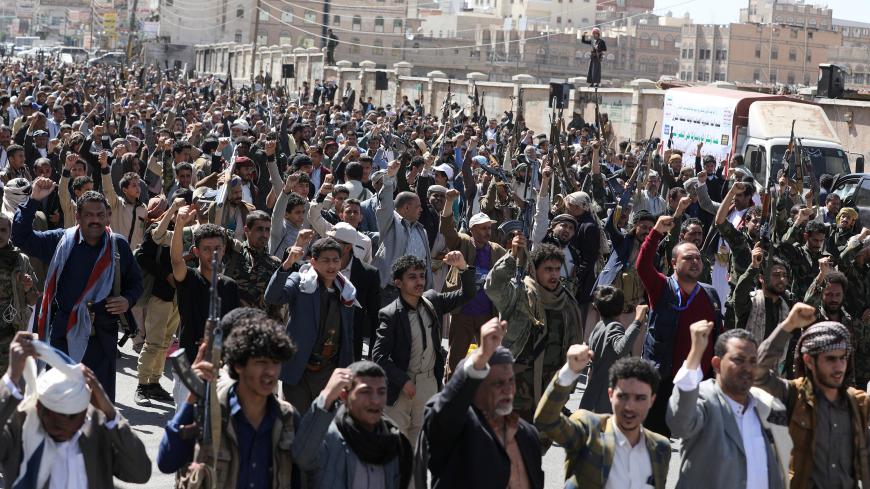 The Houthis took over critical parts of the province March 10, building on recent victories that gave them control over the strategic Nahm district, east of the capital, Sanaa, and the Hazm district, the center of al-Jawf province. They also captured al-Ghail district adjacent to Hazm in the country's northeast.

This comes in light of the retreat of the forces of Yemen's internationally recognized government, backed by a Saudi-led Arab military coalition, and Riyadh’s declining military support to this government. Government military sources told Al-Monitor on condition of anonymity for security reasons that Saudi Arabia didn't adequately support government forces in the al-Jawf battle.

The recent defeat of government forces is due to several reasons, most notably the struggle of field military wings with multiple political and ideological loyalties. While many of them are affiliated with al-Islah Party (the Muslim Brotherhood), other forces are loyal to the General People's Congress political party led by Lt. Gen. Sagheer bin Aziz, the president's recently appointed chief of staff.

In addition, rampant corruption rages within the national army. Yemeni Defense Minister Mohammed Ali Maqdashi revealed in April 2019 that only 30% of the army’s troops are on the front lines; 70% stay home while getting paid for fighting.

Meanwhile, Riyadh's reluctance to provide military support in the battle of al-Jawf can be traced to political, economic and military reasons.

At the political level, Saudi Arabia is holding unofficial peace talks with the Houthis. The kingdom, expected to host the G-20 Summit later this year, could be seeking to defuse the heated confrontation with the Houthis in part for that reason. Meanwhile, the Houthis on Feb. 14 downed a Tornado jet belonging to the Saudi air force in al-Masloub district in al-Jawf. They also bombed the facilities of Saudi oil giant Aramco in the industrial city of Yanbu Feb. 21 in tandem with the battle in al-Jawf. In addition, Saudi Arabia is pressuring the Yemeni army to restructure to reduce al-Islah's influence.

The strategic importance of al-Jawf province stems from its location on the Saudi border. If the Houthis can get control of the entire province, they would add to their current border control in Saada province. Moreover, controlling al-Jawf would pave the way for Houthis to take over Marib.

The Houthis control areas surrounding Marib from three directions, to the east from Nahm, to the south from Sirwah, and to the north from al-Jawf.

If the Houthis manage to impose full control on Khub and al-Shaaf district, the largest district in al-Jawf province, they would clear their way toward the Wadi Hadhramout region of northeastern Yemen. But field indications and movements show that the Houthis are making Marib their priority.

The Yemeni government issued multiple statements after the Houthis’ victory in al-Jawf. But the most daring and foreboding was by presidential adviser Ahmed Obaid bin Dagher, in a series of tweets. “The fall of al-Jawf may change the balance of military forces once and for all in the crucial battle with the Houthis," he began.

Bin Dagher, a former prime minister, added, “If we deal with this victory like we did with the fall of Nahm, we would be deciding the battle in favor of the Houthis in Yemen and in favor of Iran regionally.” He pointed out that this would be the end of the Saudi-led Arab coalition intervention that started in March 2015.

However, on the political level, by advancing in al-Jawf province, the Houthis seek to gain an upper hand in negotiations with Saudi Arabia or any future talks the United Nations might encourage between the Yemeni parties.

Adel Shujaa, a member of the General People's Congress party, told Al-Monitor, “External reasons led to the fall of the center of al-Jawf province, most notably the conflict between the UAE and al-Islah Party on one hand, and the conflict between the UAE and Saudi Arabia on the other. Each of these parties believe this is a matter of settling scores. This falls in favor of the Houthi militia. If the Houthis achieve a complete victory, they will control land and sea regional security.”

Even as the Houthis have their eyes set on Marib, UN special envoy to Yemen Martin Griffiths made a surprise visit to the province March 7, anticipating any military escalation.

He called for “an immediate and unconditional freeze” of military activities and the “start of a comprehensive, inclusive and accountable de-escalation process,” demanding the parties of the conflict “ensure that Marib … not become the next epicenter of fighting and of the war.”

This UN concern was accompanied by clear and direct warnings to avoid a catastrophic humanitarian crisis in Marib province, especially as “it represents a safe haven for hundreds of thousands of displaced Yemenis amid the madness of war.”

In his statement to the media after he met with Gov. Sultan al-Arada in Marib, Griffiths said, “Last week alone, thousands of displaced people arrived here to escape the fighting in al-Jawf.”

It seems that the Houthis might use their recent military victories as a trump card during unofficial peace talks to pressure Riyadh to reduce its support for the Hadi government. However, the Houthis are likely to avoid any direct confrontation with Saudi Arabia, to present a reassuring message regarding the borders.

Meanwhile, Houthis are likely to focus on controlling the vast areas in al-Jawf, and then advance toward Marib. This would open another path toward the oil and gas provinces of Shabwa and Hadhramaut in southeast Yemen.

Based on these recent developments, Riyadh's priorities are likely to pivot toward protecting its borders and improving its economy, away from its direct and crucial interference in the military confrontations on the Yemeni scene.

The Houthis succeeded in gaining a short-term military path to the source of wealth in Marib, home to oil wells and refineries, without the need to storm the center of the province, for now. They seem to be applying a well-known tactic of accepting negotiations or a truce to take a breath, and then launching a painful military strike against their opponents.