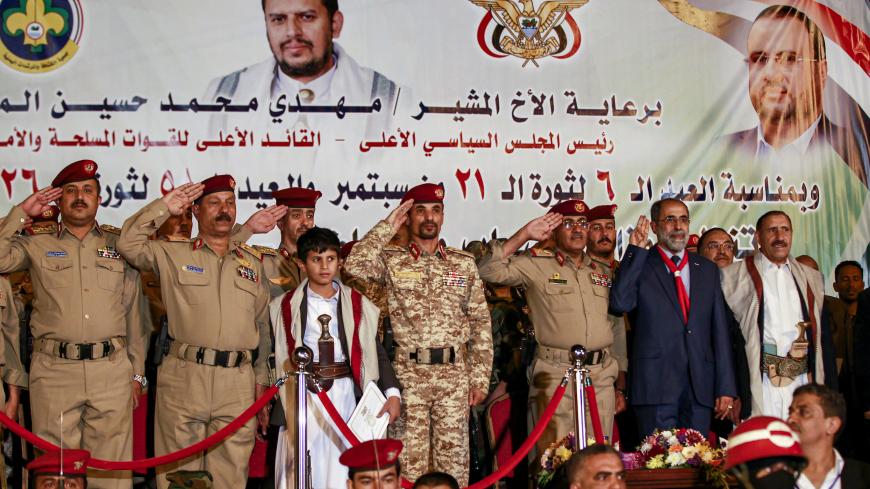 Maj. Gen. Abdullah Yahya al-Hakim (C), chief of intelligence of the administration of Yemen's Houthi rebels in control of the capital Sanaa, and other Houthi officials attend a parade commemorating the sixth anniversary of the Houthi takeover of the capital Sanaa on Sept. 20, 2020. - MOHAMMED HUWAIS/AFP via Getty Images

It has been over two months since Yemen’s Houthis launched a wide-scale military offensive on oil-rich Marib, located 170 kilometers (106 miles) east of the capital Sanaa. The Houthis seek to wrest control of this northern province where they have failed to establish dominance on the territory or people since their takeover of Yemen’s Sanaa in September 2014. Over the last six years, pro-government forces and tribal authorities have been running Marib and defending it against the Iran-allied Houthi fighters.

The Houthis' resolve to capture Marib has grown. The group has sent in a massive number of fighters and military equipment in pursuit of gaining ground in this province. They have penetrated some districts like Rahbah and Mahiliya, but the stiff resistance there has cost them dearly.

The current battle for Marib has been one of the fiercest Yemen has witnessed over the last six years. Several senior Houthi military figures and countless combatants have been killed, captured or surrendered on the battlefield. Despite their losses, the Houthis have not retreated.

The Houthis consider Marib a hub for terrorists and Saudi mercenaries. On Sept. 4, Hussein al-Ezzi, the deputy foreign affairs minister in Sanaa, wrote that Marib is housing al-Qaeda operatives.

The Houthi authorities have used this rhetoric to justify their recent escalations in Marib and attract fighters to join them.

Ezzi tweeted, “The resettlement of al-Qaeda in Marib is a fatal mistake that will serve no one. It is a catastrophe, the dangers of which may not be limited to a particular party. [President Abed Rabbo Mansour] Hadi and the Islah Party must stop these cowardly policies and immediately quit this dark mode of thinking.”

Since the kickoff of the Houthi offensive, Saudi warplanes have intensified airstrikes. It is evident that the Houthis will not easily take Marib. This province is critical not only for the UN-recognized government but also for Saudi Arabia, and the Houthis face fierce resistance there.

Majed al-Daari, a Yemeni political commentator, told Al-Monitor, “This Houthi offensive is a matter of concern for the kingdom, considering that the fall of this province will be the last nail in the coffin of the coalition battle against the Houthis in the north. And the south will not be safe from the repercussions ensuing from Marib’s fall.”

The present escalations surrounding this province pose a genuine challenge for Saudi Arabia. Over the six years, its Yemeni loyalists have not managed to liberate any northern province controlled by the Houthis and now the latter are striving to drive the Saudi-backed forces from Marib.

Daari said, “Certainly, the battle of Marib is a dangerous turning point in the military scene in Yemen as a whole and a fateful danger for the south and the Saudi-led Arab coalition. This is so due to two reasons: First, Marib is the last stronghold of the legitimate Yemeni government in the north. Second, it has a strategic location and its fall will pave the way for Houthi movement to the south.”

On Sept. 14, the Yemeni government called on the United Nations to step up pressure on the Houthis to cease their attack on Marib, a city whose normal population of one million has swelled to three with two million internally displaced persons.

It is evident that though the UN may call for de-escalation, it will not take direct action to fend off a humanitarian tragedy in this province.

On Sept. 15, UN envoy to Yemen Martin Griffiths warned in his briefing to the UN Security Council that the ongoing Houthi escalation in Marib is undermining peace prospects.

Griffiths stated, “The political importance of Marib must also not be underestimated. Military shifts and consequences and events in Marib have ripple effects on the dynamics of the conflict across Yemen. And if Marib falls, simply put, this would undermine prospects of convening an inclusive political process that brings about a transition based on partnership and plurality.”

Khalil al-Omary, editor of the Rai Al-Yemen news site, told Al-Monitor the Houthi military gains in Marib are highly aggravating to Saudi Arabia and another failure in its war in Yemen. He added, “Logically, any Houthi progress is a setback for Saudi Arabia and the Arab coalition it has been leading for six years. However, it seems that Riyadh does not care enough about what is unfolding. It is not clear what is happening in the Saudi mentality.”

On Sept. 1, Saudi Arabia sacked Fahd bin Turki bin Al Saud, who had been leading the joint forces fighting the Houthis in Yemen. The move is clearly connected to the military developments in Yemen.

While the Houthi fighters keep flooding toward Marib, it remains to be seen if the Saudi-backed Yemen forces will repel the Houthi attacks and protect the relative peace Marib has maintained over the last six years. If the Saudis fail to stop the Houthi expansion there, it will mean the demise of the coalition’s presence in Yemen’s north.

Daari said, “Losing Marib is catastrophic for the Saudi-led coalition because the Houthis will get their hands on the province’s oil and gas and it will be easier for them to head to Shabwa and Hadramout in the south.”