Both sides silent as military escalation continues east of Sanaa

Both Yemen's government forces and the Houthi rebels have remained silent regarding the ongoing battles in Nahm district, east of the capital, Sanaa, but have accused each other of instigating attacks. 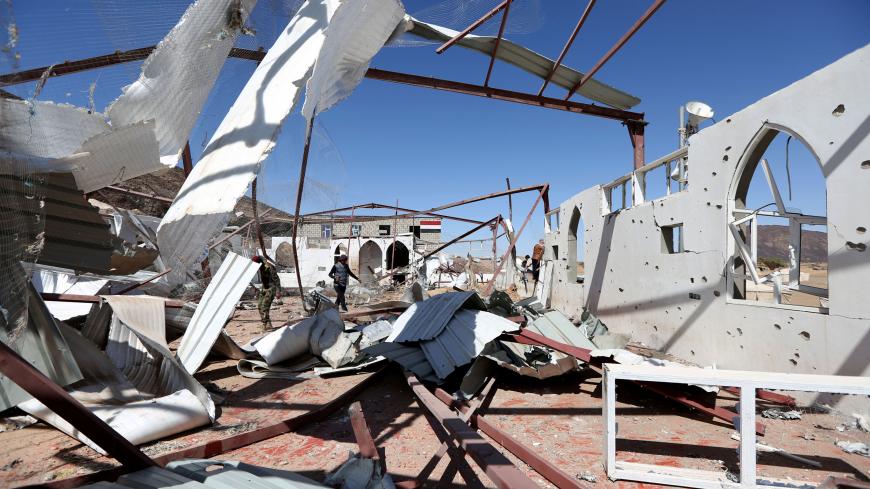 Government soldiers and others inspect the site of a Houthi missile attack on a military camp’s mosque in Marib, Yemen, Jan. 20, 2020. - REUTERS/Ali Owidha

Two hours following the strike, which took place during evening prayers, the Saudi and government media blamed the Houthis for the attack. The Yemeni rebels have yet to take credit for the attack, which killed at least 116 soldiers. Iranian PressTV attributed the attack to “Ansarullah,” in reference to the Iran-backed group.

On Jan. 19, Hadi — who has been residing in Riyadh since March 2015 — condemned the attack and accused the Houthis of “blatant aggression.” Meanwhile, the Yemeni Defense Ministry put its forces at nearby bases on high alert.

The accusations came after the group’s spokesman Yahya Sarea tweeted Jan. 17 that its forces had repelled “a very large-scale offensive by the forces of aggression [Saudi-led coalition and government] on the Nahm district,” and that “all appropriate actions will be taken against this escalation.”

The rebels accused the Saudi-backed government of launching an offensive Jan. 17 against them in the Nahm district, which neighbors Marib province. The government has refrained from commenting.

As the death toll rose on the day of the attack on the Marib military base, Hussein al-Ezzi, deputy foreign minister for the Houthi-led government in Sanaa, tweeted Jan. 19, “We don't attack anyone nor want to hurt anyone. But in return, we don't allow anyone to abuse us or hurt us.”

Houthi leader Mohammed al-Bukhaiti later denied in an interview with Al Jazeera Arabic that the group attacked Marib’s military base.

The government's offensive on the Nahm district seems to have taken the Houthis by surprise.

The escalation came after UN special envoy for Yemen Martin Griffiths praised the decrease of military activities across the country in the past two weeks. “It has been one of the quietest weeks of the war in Yemen since the war began,” he said during a Jan. 16 speech at the United Nations Security Council.

Later that day, Griffiths condemned the “escalation of military activities,” particularly the attack on the military camp in Marib. “The hard-earned progress that Yemen has made on de-escalation is very fragile,” his statement read.

Though few details are available about the ongoing battles in the Nahm district between Houthi and government forces, activists from both sides post reports every now and then.

Adnan al-Ajam is the editor-in-chief of Al-Omanaa, a website close to the Southern Transitional Council. He tweeted Jan. 18, “The sixth battalion of the 29 Mika Brigade [Islah Party] based in Nahm district and all its equipment have fallen into the hands of the Houthis.”

The United Arab Emirates-backed council has long opposed the Brotherhood-linked Islah Party, which controls the oil-rich Marib and Shabwa provinces.

Late on Jan. 20, the local press reported heavy clashes between the two warring sides in Nahm and Sirwah districts. Both sides claimed to have achieved major gains on each other.

In the early hours of Jan. 21, the Saudi-owned Al-Arabiya TV dispatched its prominent war correspondent Mohammed al-Arab to Nahm. Arab has been covering military operations on the borders of Yemen with Saudi Arabia. In a Jan. 21 tweet, he said government forces killed the commander of the Houthis’ so-called “Death Battalion” in Nahm and all his fighters surrendered.

Meanwhile, the Turkish Anadolu Agency reported that a ballistic missile hit a military compound in Marib Jan. 21, killing one soldier and wounding three others. Military sources quoted by the agency did not specify which party was behind the attack.

Al-Monitor tried to get a firsthand account of the situation from citizens in al-Hatarish market, 20 kilometers (12 miles) from Sanaa. The market is a renowned trade point for the Yemeni stimulant khat.

From the front seat of a Toyota Hilux pickup truck at the bus station of the Nahm district market, khat farmer Helal Ali waited for more passengers to board his vehicle before heading home.

“The clashes are far from us,” Ali told Al-Monitor, adding that he heard the fighting at night from Jan. 17 to Jan. 20. He left before Al-Monitor could ask him where he lives.

“I don't know who initiated the fighting … Do I look like I was in the middle of the battles?” Ali said when asked who started the clashes on Jan. 17.

Although he confirmed that “heavy clashes” and air raids broke out on Jan. 17 after relative calm, he said the Jan. 20 clashes were limited to artillery shelling, while warplanes could be heard hovering in the skies. He added, “I don't know who is advancing.”

Three passengers on the truck declined to speak to Al-Monitor about where the fighting is taking place for fear of retaliation.

Meanwhile, military sources told Al-Jazeera Arabic on Jan. 22 that the Houthis had taken control of the strategic Manara Mountain in Nahm district. In January 2018, CNN's Nic Robertson had reported from the top of the mountain while it was under government control.

Rajeh al-Jaradi, director general of the Nahm district, spoke to Al-Monitor on the evening of Jan. 22 via phone. He said sporadic clashes are ongoing in Firdhat Nahm, in the northeast outskirts of Nahm district.

“Clashes are ongoing at Barran, Melh and al-Nuaimat villages,” he elaborated. These villages belong to the Nahm sub-district of Ayal Ghufayr. He added that fighting is also taking place in Al-Haoul village of the same district.

Asked why the Houthis are remaining silent on the course of the battles, he said, “Because [Sarea] can’t issue any remarks while the battle is ongoing. When it ends, he can then publicly speak about it based on the results on the ground.”

Citing an unnamed military source, al-Masdar, a major online Arabic news outlet belonging to the Islah party, reported Jan. 22, “Houthi fighters took over Tuesday night [Jan. 21] the strategic Manara Mountain after the withdrawal of government forces.” The report went on,“According to the same source, this time, the battle is taking place in a near total absence of coalition fighters.”

However, the coalition reportedly launched around 10 airstrikes against Houthi positions on the night of Jan. 22.

Mohammed Ghobasi, a political analyst based in Sanaa, said there was “no justification for the military escalation” in Nahm and Sirwah districts.

Speaking to Al-Monitor, he said the offensive, which he blamed on the government, is an attempt to gain more “trust, and financial and military support” from the Saudi-led coalition. This is because the member countries of the coalition have lost trust in Hadi and his generals who have incurred several losses on other fronts in Yemen, from Hodeidah to al-Mahrah, Socotra, Abyan and Shabwa, he explained.

He pointed out that resuming the attack in Nahm could be a “reminder” by the government for the Saudi-led coalition that it entered the war with the aim of restoring Hadi’s legitimacy in Sana. But he ruled out the possibility of the government recapturing Sanaa, as all attempts since September 2015 have failed so far.

“It is an impossible battle as Hadi’s forces have been [stuck] in Nahm for four years,” Ghobasi told Al-Monitor in a Facebook message. “Instead of restoring Sanaa, the temporary capital of Aden, Socotra and al-Mahrah, and parts of Abyan and Shabwa slipped from Hadi's hands.”