An offensive on Marib province is looming but may not be imminent as analysts say they think Marib will likely remain in a state of ebb and flow following the battles in al-Jawf and Nihm. 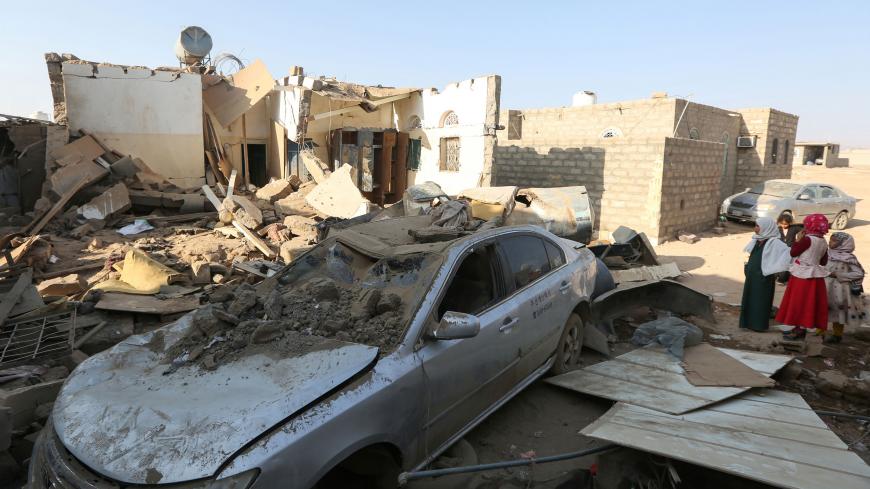 Girls stand at the site of a Houthi ballistic missile attack on the district of Rawda in Marib, Yemen, Feb. 6, 2020. - REUTERS/Ali Owidha

SANAA, Yemen — Following the fall of al-Jawf province in northern Yemen to the Houthi rebels March 1, attention shifted to the oil-rich province of Marib amid a looming Houthi offensive on the city of Marib. UN envoy to Yemen Martin Griffiths felt the danger and paid a rare visit to the city, raising Houthi ire.

Speaking at a press conference following his meeting with Marib Gov. Sultan al-Arada on March 7, Griffiths said Yemen stands at a critical crossroad, adding, “We will either silence the guns and resume the political process or we will slip back into large-scale conflict and suffering that you have already seen here in Marib.”

In response to Griffiths’ statement, Houthi spokesman Mohammed Abdul-Salam tweeted that the solution in Yemen is “based first on stopping the aggression and lifting the siege, then holding serious political negotiations.” He called on Griffiths to distance himself from the conflict.

Political analyst and Sanaa-based researcher Abdul-Bari Taher said the battle for al-Jawf and Marib provinces is approaching “the point of danger.”

“The situation is heading toward dangerous escalation because the war has now reached the point of explosion,” Taher told Al-Monitor in a phone interview. “The 5-year-old war was a disastrous one, but it was [focused] in the less sensitive regions for the parties to the conflict.”

Taher's point about a possible explosion has to do with the two oil-rich provinces where fighting could have a strong impact on civilians' lives. However, following the fall of al-Jawf, some media reports indicated that the Houthis are conducting negotiations with Marib tribes to hand over the province peacefully and avoid escalation, as tribal leaders in Sanaa who are aligned with Houthis are still in contact with tribes in Marib. Previous tribal mediations have succeeded in reaching prisoner swap deals.

Two tribal leaders aligned with the Houthis — Sheikh Mujahed al-Quhali of Amran in central Yemen and Hussein Hazib of Marib — were quoted as saying negotiations are ongoing with Marib's tribes to hand over the province peacefully and avoid fighting and destruction. The Houthis reportedly seized the Raghwan district of Marib on March 3 with no fighting after an agreement was reached with its tribes.

Quhali had said the tribes would reply to the Houthis by March 4, but the date passed with no response. Since then, Houthi military activities have been limited in the province.

Meanwhile, the Houthis have said their operation in north and central Yemen aims to open the Sanaa-Marib highway, reopen the Marib power station to provide electricity to areas that have been cut off, including Sanaa, and involved oil and gas wealth, which they said belonged to all Yemenis. The Sanaa-Marib highway has been closed since 2016, when government forces took control of Nihm, which lies on the highway. Since then, the area has witnessed daily clashes between the warring sides and civilians have used alternative routes through other provinces.

“The withdrawal of government forces and the fall of al-Jawf reminds us of the fall of Amran and Sanaa,” Yemeni political researcher Sultan Dahnish tweeted March 7. He warned the Saudi-backed army about recently appointed military commanders whom Dahnish blamed for the fall of the province.

A day before the fall of al-Jawf, internationally recognized President Abed Rabbo Mansour Hadi had appointed Lt. Gen. Sagheer bin Aziz— who served as commander of the army’s Joint Operations since 2019 — as chief of staff at the Ministry of Defense. Ben Aziz was previously defeated by Houthis in 2010 in his birthplace village of Harf Sufyan in Amran, after years of fighting during the six wars of Yemen from 2004 to 2010 between Houthi rebels and the regime of President Ali Abdullah Saleh. Saleh was killed in 2017.

Taher said the fighting that broke out in January in Nihm district is now taking on another dimension involving “fighting over wealth and also protecting wealth zones.”

In addition to producing natural gas, Marib is known for its oil fields and Safer’s oil refinery. The province had the only operational border crossing (Wadia) with Saudi Arabia before the kingdom closed it March 9 in response to the coronavirus outbreak; the Saudis only allowed trucks to pass through.

Taher said the battle for Marib “is more disastrous and dangerous because it directly affects the borders with Saudi Arabia and touches also the areas of wealth.”

“The war is now a disaster if they [warring sides] do not reach an agreement,” Taher said, adding that reaching a political solution “is the least possibility that warring parties” can do and that the greater possibility is that “war will escalate and take a more disastrous and dangerous approach.”

Yet some say they believe that even if the reported talks between Houthis and Marib tribes fail, the Houthis will not launch an offensive against the province.

Mohammed al-Maqaleh, a pro-Houthi analyst, tweeted March 7, “For some, it's better for Marib to remain in the hands of mercenaries [Saudi-backed forces] so that [Houthis] don’t bear the responsibility toward citizens [of providing] oil, gas and electricity.” Maqaleh added: “The matter is all a masquerade and proof is that they [Houthis] left Marib and went to [attack] al-Jawf.”

Before the war broke out, Marib provided about 80% of Yemenis with their oil, gas and electricity needs. But today, the Saudi-backed government is blamed for the power shortages, and should Houthis seize the province, more pressure will be placed on them.

However, Taher said, "The fighting in any region of Yemen had the ultimate target of [reaching] al-Jawf and Marib, since these areas are close to Saudi Arabia. Furthermore, taking the province would cut the road to the front lines in the southern provinces.”

“I expect that the war will escalate and Marib is now standing at the gate of an upcoming battle,” Taher added.

As UN efforts have failed to force the warring sides to implement the Sweden Agreement reached in December 2018, it appears that only a miracle could stop the fighting in Yemen, including the looming battle in Marib. Even southern separatists are concerned that their provinces might fall into Houthi hands if the Houthis then push toward the southern provinces.

After the fall of Hazm, the capital city of al-Jawf, Saudi-backed government forces in Taiz and Marib were reportedly under a state of undeclared emergency preparing for an expected Houthi offensive. In the event that this occurs, all provinces in the north would be under Houthi control.

“I do not really rule out that there will be a battle in Marib,” Taher said. “This war is similar to the mobile warfare in which they [Houthis] achieve a victory in Nihm, then in al-Jawf, to be followed by a state of ebb and flow toward Marib.”