The once invincible Ahmar family is on the verge of losing its status and power in Yemen after decisive blows inflicted by the Shiite Houthis. 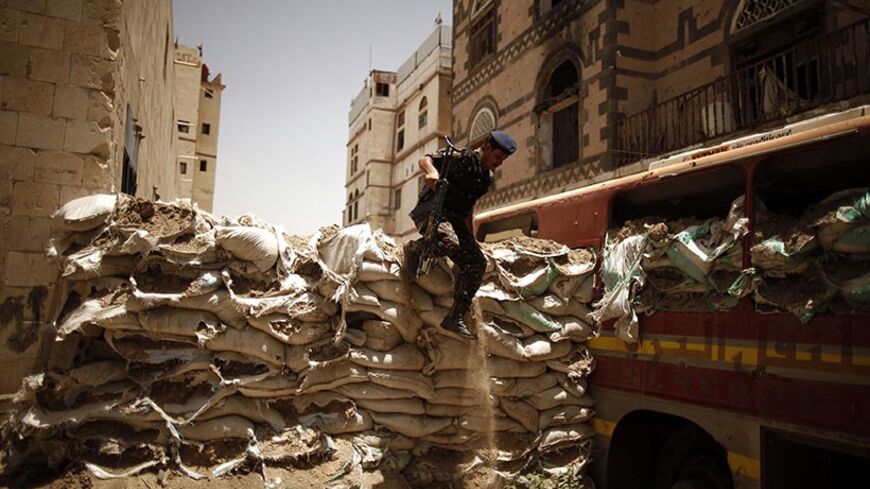 A police trooper jumps over a barricade of sandbags erected by tribal militants loyal to the powerful Ahmar family in Sanaa, May 28, 2012. - REUTERS/Khaled Abdullah

For decades, the Ahmar family had been one of the most powerful forces in Yemen. Its influence was built on an alliance that dated back to the days when former President Ali Abdullah Saleh took power in coalition with the most prominent leader of the Hashed tribal confederation, Sheikh Abdullah al-Ahmar. They were also directing the government’s decisions, producing a brand of politics that brought harm to millions of Yemenis.

Ahmar’s children, who inherited leadership of the tribe after he died in 2007, have never quite understood their tribe’s true strength or what made their tribal confederation, the Hasheds, Yemen’s strongest. This strength did not derive from size alone, as the Hasheds are the third-largest tribe in Yemen, after the Madhaj and Bakkil tribes. Indeed, it was their alliance with the state, as represented by the regime of the former president, that served as the backbone upon which they depended to protect their interests and secure privileges unprecedented for any Yemeni family.

When they rebelled against Saleh, they unwittingly lost the state’s support. This was clearly evident in the latest confrontation, where their old ally Saleh tried to exact his revenge by using his influence to make other tribes ally with the Houthis rather than the Ahmars. This accusation was levelled at Saleh by Hamid al-Ahmar, one of Ahmar's sons, and confirmed to Al-Monitor by tribal sources. Ironically, their support for the revolt against Saleh was among the key catalysts for the events earlier this year that appeared to mark the end of their era as one of the most powerful forces in Yemen.

The Houthi takeover of the Ahmar family’s stronghold this January left many Yemenis in a state of shock. The once invincible family had been humiliated, routed from their former bastion. But regardless of how it seemed then, events had been building for some time.

Over the past several months, the Hasheds and their various pro-Ahmar branches have waged an unequal battle with the Houthi movement, which, since 2011, has quietly expanded its influence to within the tribe and won the loyalty of several anti-Ahmar sheikhs. When Ahmar’s son, Hussein al-Ahmar, helped mobilize Salafist tribes against the Houthis — after the latter attacked the Salafist Dammaj region in late 2013 — the countdown to the Ahmar family’s loss of legitimacy neared its end.

Over the last 10 years, the Houthis have acquired extensive combat experience. They possess deeply committed fighters who believe that their war is a divinely sanctioned jihad and obligatory obedience to their leader in Muran. Indeed, they all but completed their conquest of Saadah by expelling thousands of Salafists from Dammaj in January. The Hasheds, moreover, were the Houthis’ next stop on their road to Sanaa, which had never been so ripe for capture.

The Ahmars had won the right to represent the Hasheds for decades by forging a monopoly on tribal decision-making and by displacing other sheikhs, who then became enemies of the family. Were it not for their lack of means to confront the Ahmar family and seek state support, they might not have turned to the Houthis, who furnished them with aid in rebelling against the Ahmar family’s historic control over tribal affairs from their palace in Sanaa.

The Ahmars failed to deepen their control over their men on the ground, allowing it to weaken until it slipped through their fingers and moved furtively toward other powers. It seems that the statements and rallies the Ahmar family made against the Houthis in December 2013 had stemmed from their undaunted faith in their family’s ability to tame the threat the Houthis posed to their influence. They had failed to grasp that the facts had changed. Despite their abundant wealth, the ambitions of Ahmar’s sons were greater than their capabilities. And so the winds had turned in favor of the Houthis.

The Houthis began their war against the Hasheds on five battle fronts, pitting them against forces that constituted an extension of the Ahmar family. The Muslim Brotherhood did not officially enter these clashes despite it being one of the Ahmars’ true allies. But these fronts quickly fell before the Houthi advance — some by force of arms and others through political guile in isolating each battlefront and dealing with each on its own terms.

When the Houthis concentrated all of their strength on the Hasheds, the tribe fell. Despite all the excuses subsequently offered by Ahmar’s sons, they were defeated rather easily. The betrayal of the Ahmar family by some Hashed leaders, who were offered financial incentives by the former president, was — from the Houthis’ perspective — a sly tactic to penetrate the Hasheds. As far as the Houthis were concerned, they had simply acted on the principle that "all warfare is based on deception."

Few were the Hashed men who fought the Ahmar family out of genuine hostility. Yet, many were those who fought them because their leaders’ newfound alliances required it. Still others fought for their daily wage. The remaining portion was composed primarily of Salafist loyalists, motivated by the fall of Dammaj in Saadah.

Meanwhile, Saudi Arabia, which has historically been among the Hasheds’ most prominent financial backers, had shut off the financial spigot to the Ahmar family over the last three years. Riyadh did this out of several considerations, which ultimately stemmed from the Ahmar sons' inability to properly internalize the nature of their family’s alliance with Riyadh. Indeed, some of the sons — especially Hamid al-Ahmar, an extremely wealthy businessman — refused to backtrack on their alliance with the Muslim Brotherhood. Hamid remained a prominent Yemeni leader in the Muslim Brotherhood, even as the Saudi relationship with this group ruptured into unprecedented hostility.

At the same time, the pipeline of arms and financial support remained open to the Houthis, primarily from Iran. Riyadh had also recently accused Qatar of supporting the Houthis, and so placed the group on Saudi Arabia’s terror list.

The Hasheds’ battle against the Houthis appeared to resemble mere self-defense, since the tribe’s forces never approached Houthi strongholds. Nevertheless, they supported the Salafists and their allies’ attacks against the Houthis, since the former lacked an independent political agenda. Both the Ahmars and the Muslim Brotherhood share an interest in containing the Houthis. Yet, the Muslim Brotherhood — with the exception of some Hashed tribal members and supporters — has not officially taken part in the Hasheds’ war with the Houthis. For that reason, they have not collectively mobilized in the name of the Brotherhood, sparing the country a genuine catastrophe.

While the intensity of the battles — comparatively speaking — calmed after the Houthis bombed the Ahmar’s family house in Sanaa, the conflict is unlikely to end anytime soon. The continued struggle between the two sides, fuelled by local factors and regional funding, will simply take another shape. The battles will likely resurface in any new elections, which are yet to be set, as both sides will deploy weapons to influence the ballot box to fulfill strategic goals.