Given the tribal nature of Yemeni society, disputes are often resolved via state-sponsored “mediation committees,” which undermine the state and rule of law. 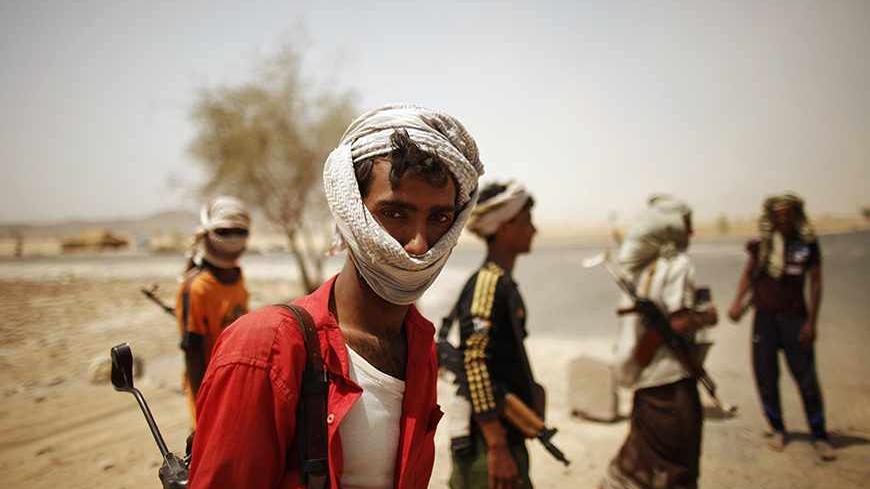 Pro-army tribesmen patrol a checkpoint on a road leading to Lawdar in the Yemeni province of Abyan, June 19, 2012. - REUTERS/Khaled Abdullah

Yemen has its unique particularities, whether at the level of its society or state. Personal disputes are often solved at the hands of social figures more than by state apparatuses or in the corridors of the judiciary.

The country has unwritten laws called customs, which serve as a reference for solving disputes of any kind. These customs have broader and more influential powers than the majority of official laws.

It's normal for a traffic policeman in the streets of Sanaa to end a dispute arising from a car collision in accordance with the famous “two-thirds and one-third” rule, which means that the party who caused the accident would bear the cost for two-thirds of damages, while the victim bears the remaining third.

Obviously, this goes against the law and contributes to further marginalizing the state's power, pushing society toward tribal rules and social customs that are based on satisfying both litigants.

At the national level, things are not much different. Indeed, the Gulf Initiative, which is based on power sharing, is to a large extent similar to the principle of the “two-thirds and one-third” rule used by traffic policemen.

This culture has become the approach espoused by the state, which has failed to apply the laws that it had enacted. The state has drifted toward the options of customs and moderate solutions, even if the price to pay was the rule of law and the state’s prestige. Mediation committees replaced the state in solving differences, while the state itself would, in many cases, be a party to the conflict that needed to be resolved.

The state assigns a group of political, tribal and sometimes military figures to form what is known as a “mediation committee,” charged with solving conflicts that arises between armed groups outside the state's framework.

These groups possess heavy weapons, despite the fact that the law criminalizes it. While security authorities are supposed to disarm and force them under the civil approach to solve their differences, they assign people to mediate and reach compromises to satisfy both parties. These compromises serve as temporary solutions for only short periods of time. They postpone conflicts and wars and do not put a permanent end to them.

These mediation groups propose paying sums of money to sabotaging gangs, so they would stop destroying power lines and oil pipelines or kidnapping foreigners in Yemen, with whom they have had no previous problems. This pushed some militants to carry out acts of sabotage in the hope of getting funds from the state.

A mediation group of religious scholars has recently gone as far as to mediate between the state and the terrorist group al-Qaeda. However, the state later on refused to sign the truce agreement set forth by the mediation group, which finally issued a statement holding the state responsible for the failure of the agreement, although al-Qaeda is internationally known as a terrorist organization that violates local and international laws.

Moreover, earlier this year, clashes between the army and al-Qaeda in the Rada district were halted by the mediation of several figures, although al-Qaeda had killed members in the army and kidnapped three foreigners who were released later on.

The mediation committee that was formed by Yemeni President Abed Rabbo Mansour Hadi has failed once again in reaching a cease-fire between the Houthis and Salafists, who have been at war for weeks as a continuation for the battle that started in 2011 because of their different dogmas. While the Houthis are affiliated with Shiites who support Iran, Salafists are affiliated with Wahhabis who are loyal to Saudi Arabia.

While mediation efforts managed to temporarily stop the war, conflicting parties resumed shelling with medium and heavy artillery, which they acquired illegally, as the state stood by idle.

A Houthi spokesman said, "A permanent cease-fire depends on the outcome of the meeting between the committee and Salafists. If they agree to evacuate their military sites and hand them over to the army — according to the agreement that was previously signed with the committee — there will be a cease-fire. Otherwise, clashes will continue."

Such mediations with Houthis are not the first to take place in Yemen. In 2004, when the first war broke out between the Houthis and the state, former President Ali Abdullah Saleh assigned a group of scholars, parliamentarians, party leaders and tribal sheikhs to solve the crisis between him and Hussein Bader al-Din al-Houthi. The committee had managed to convince Houthi to hold dialogues and set a date and place for the meeting. However, a military jet bombed the meeting place before the arrival of the committee and Houthi.

Houthis were also involved in three armed conflicts simultaneously: in Ibb Governorate, in Dhamar Governorate in the central part of the country against a group of Salafists and Amran in the north against gunmen from the Hashid tribe loyal to Sheikh al-Ahmar's family, which is known for being hostile against Houthis.

However, the mediation committee managed to calm the situation between the warring parties, since these conflicts were marginal and aimed at maneuvering to win the battle elsewhere, namely in the small town of Dammaj in the Saadah Governorate, which serves as the stronghold of Houthis where the state has almost no power.

The Saadah Governorate is controlled by Houthis except for the town of Dammaj. The town includes the largest and most important center for Salafist religious learning (Sunni Wahhabi), which receives scholars from various nationalities, who possess light and medium weapons that enabled them — alongside their dogmatic religious faith — to resist the many attempts by Houthis to control their area. The presidential mediation committee is still going back and forth from Dammaj (the Salafist stronghold) to Maran (the Houthis stronghold), but to no avail. It failed to come up with solutions that satisfy both parties or even intimidate them by the power of the state.

More than a month prior to this incident, Saleh's right wing, Maj. Gen. Mohsen al-Ahmar, who hails from the same tribal region, accused Saleh of plotting his murder in the form of a broad tribal mediation aimed at reconciling between both men. The mediation was similar to a protest, as 3,000 individuals from the region headed to the headquarters of Ahmar, in addition to the people who are part of the mediation. When the latter went out to receive them, gunshots were heard, killing and wounding many, save for Ahmar. Saleh, however, accused his rival of attacking and assaulting the mediation committee.

Despite the negative impact social customs have on laws, the killing of mediators regardless of their stance is considered — according to these customs — a vice and a criminal act requiring severe punishment. Whoever conducts the act will be at the mercy of the family of the murdered, which judges him as it deems fit even if the decision is unjust. Also, the person who kills the mediator will be ostracized and tainted with stigma and dishonor, regardless of the punishment he endures.

Therefore, when the state uses mediators as bait — even if the responsibility is on the ruler and not the state — it will be ruining the customs as well as laws, which it must preserve. The new authority will be choosing the worst of two choices if it does not get out of the vicious circle of mediations and respect the law.