What's Behind the Sectarian Tensions in Yemen?

Tensions between Yemen's two warring sects mean the country is still in danger of a civil war erupting. 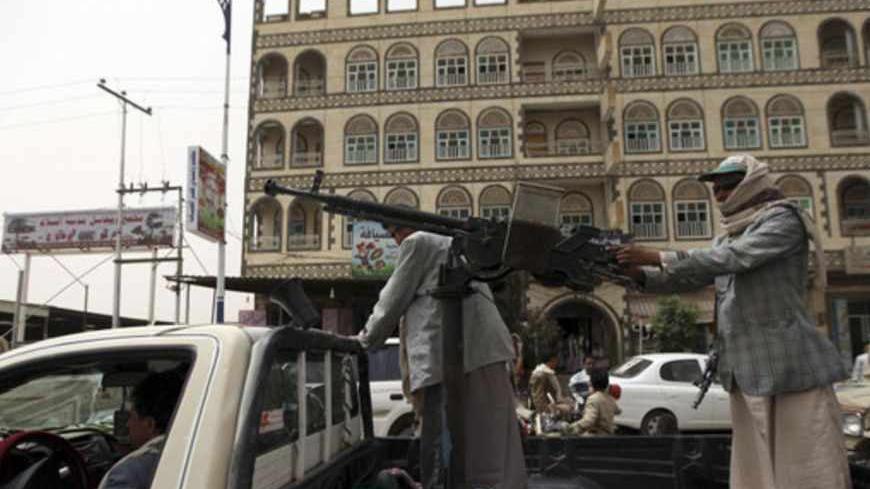 Followers of Yemen's al-Houthi Shiite group ride in an open vehicle while carrying weapons to secure a road in the northwestern province of Saada, ahead of attending the funeral of the group's late founder Hussein Badreddin al-Houthi, June 4, 2013. - REUTERS/Mohamed al-Sayaghi

Yemeni society is torn between two warring sects. Today, for every step Yemen takes toward democracy, it takes two steps back toward a sectarian conflict the cost of which it cannot afford.

On Thursday, Sept. 26, 1962, Mohammed al-Bader, the last of (North) Yemen’s Zaydi rulers, left Sanaa after his palace was bombarded by army officers who had revolted against the imamist regime and declared the first republican regime in the Arabian Peninsula. Both Saudi Arabia and Iran took a hostile stance toward the revolution but could not stop it.

After the so-called national reconciliation of 1970 between republicans and royalists in northern Yemen, an effort similar to today’s National Dialogue Conference, Saudi Arabia recognized the new regime as a fait accompli and then sought to spread Wahhabi fundamentalism in Yemen.

A center was established in Dammaj, Saada, headed by Moqbel al-Widai. Saada was the center of Zaydism, a Shiite school of thought during the imamist era. Saada is also next to the Saudi border. After the 1979 Iranian Revolution, some moderate Zaydi figures adopted the Iranian Shiite Jaafari doctrine in response to the spread of Saudi Wahhabism in the Zaydi region.

Most Salafists allied with the Muslim Brotherhood in Yemen, and in September 1990 they became a political party called the Yemeni Congregation for Reform (YCR), which sought to spread Sunni doctrine in Zaydi areas in Yemen. For a time, there was a cold war between Sunni political Islamism (YCR) and Shiite political Islamism (Hizb al-Haq and religious figures before the Houthi movement). That was followed by the Houthi movement in 2004.

The cold war began affecting other segments of society, and in the early 1990s a competition emerged over who would control the houses of worship (mosques). Each side spread hostile rumors about the other.

Parties to the conflict today

In mid-May 2013, Al-Murtada bin Zayed al-Mahturi, a Zaydi scholar and lecturer at the Faculty of Sharia and Law at Sanaa University, was pelted with shoes and expelled from a university lecture hall by Sunni students. They claimed that he had insulted the Prophet’s companions.

Two decades ago, Mahturi had a long struggle with YCR religious scholars and succeeded in establishing the Badr Cultural Center in Sanaa to teach Zaydi doctrine. In 2004 — the start of the war between the government and the Houthi movement in Saada — he announced to the media that he had refused foreign offers to adopt the Shiite Jaafari doctrine. Mahturi disagrees with the armed Houthi movement, which is opposed by a number of Zaydi figures because it adopted the Jaafari doctrine.

Conversely, Mohammed al-Imam, who heads a Salafist religious education center in Maarab, south of Sanaa, said in his recently published book that the Muslim Brotherhood (YCR in Yemen) do not serve Islam, they “use” it. Imam is against political Islam, but at the same time describes Shiite Muslims (Houthis in Yemen) as apostates. Thus, he is against both sides, which is similar to Mahturi’s situation. Imam is against the Houthis but is not with the Brotherhood, while Mahturi is against the Brotherhood but is not with the Houthis (although he has expressed sympathy toward them, and a number of his students have joined the Houthi movement).

In short, Yemen essentially has four religious groups, divided into two categories (Sunnis and Shiites), that promote their ideologies and try to attract supporters by doing political work under religious cover. Their rivalries became public with the start of the Arab Spring in 2011, as they tried to fill the newly created power vacuum.

A conflict within the Arab Spring

In early 2011, young opponents of the government descended on squares to demand the regime’s departure. The YCR rode the wave of the youth revolution. The YCR and the Houthis met in Change Square, and they were united in their goal of overthrowing the regime but disagreed on what should replace it.

As the two sides competed to attract independents, they fought an actual war with medium and heavy weapons to control the Jawf governorate (northeast of Sanaa) after some military units withdrew from the area. That war ended in a stalemate and a reconciliation mediated by tribal elders.

Another war erupted in Dammaj between the Houthis and students of the Salafists Dammaj Center (anti-Houthi but not with the YCR). That war was also ended through tribal mediation, but armed conflict between the YCR and the Houthis moved to parts of Hajjah governorate (northwestern Yemen). The war was confined to a small area and quickly ended because it was mostly based on personal differences among people there.

When the YCR took the place of the Ali Abdullah Saleh regime, it claimed that the Houthis sought to revive imamist Zaydi rule. The Houthis countered by accusing the YCR of betraying the youth revolution by agreeing to a political solution with Saleh’s government based on a US-Saudi initiative. The Houthis also accused the YCR of joining the transitional government to try to monopolize power in the future, which would be a disaster for the Houthis.

Because of the way that relations between the two sides developed during Yemen’s political transition, the Yemeni government revealed in 2012 and 2013 that there had been several weapons deals, some with Turkey (limited to light weapons) and others with Iran (heavy and sophisticated weapons). The weapons had been smuggled into the country.

The Houthis’ alliance with Iran has become obvious, and no one bothers to deny it, while Turkey has relations with the Muslim Brotherhood. This is a foreboding indicator that both sides in Yemen are preparing for war, which would threaten the country's future.

The effect of the Syrian situation on Yemen

A few months ago, there were news reports that thousands of young Yemenis had gone to Syria to wage jihad against the Bashar al-Assad regime. They made it to Syria with the help of the Muslim Brotherhood, in coordination with Turkey and funding from the Gulf.

There have also been reports that Iran and Lebanese Hezbollah are training, financing and arming Houthi elements and other Southern Movement factions loyal to Iran. Reports circulated that there were Iranian spy cells in Yemen and that some of the spies had traveled to Syria and Lebanon and then on to Iran to train and to help implement Iran’s plans in Yemen.

Those reports allege that the strained relations between the YCR and the Houthis are associated with the conflict in Syria. The YCR — along with Qatar, Saudi Arabia, Turkey and the United States — is helping the Free Syrian Army, and the Houthis, along with Iran and Hezbollah, are assisting the Assad regime.

So the stability of Syria and Yemen are connected. The local wars may worsen depending on how the regional and international conflict develops. Iran considers Lebanon a strategic ally, which might be of some consolation should Assad’s regime falls. Saudi Arabia is indirectly supporting local forces against Iran’s allies.

At the beginning of June 2013, the Houthis officially received the body of their founder, Hussein Badreddin al-Houthi, from the Yemeni government, some eight years after his death. The Houthis suspended schools and public services in Saada and rallied tens of thousands to attend his funeral. The pictures of the founder covered Sanaa as Houthi media mourned him. The other side responded by posting pictures of the leader of the military campaign in which Houthi was killed.