As the National Dialogue Conference works to resolve disputes in Yemen and pave the way for a democratic government, disputes among religious groups as well as with secularists continue. 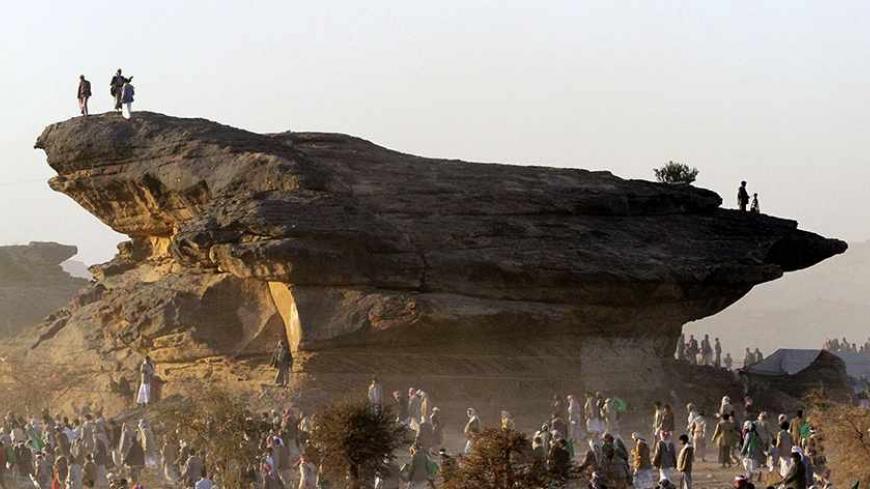 There is currently an armed conflict going on between two sects in the Saada Governorate in northern Yemen. They each believe they are right and the other is wrong and must be confronted. Each sect has its own religious and political supporters, locally and regionally.

The first is represented by the Houthis of the Ansar Allah movement, which is a religious/political armed movement that belongs to the same doctrine espoused by Iran.

The other camp is represented by the Salafists who belong to a Sunni religious group espousing Wahhabism, the official Saudi Arabia doctrine. The country supports its members outside, such as Salafists in Yemen, especially since it denounced its alliance with the Muslim Brotherhood and following the establishment of the Rashad Union Party in March 2012. This is not to mention the different political stances about what is happening there.

Both Salafists and Houthis participate in the political process in Yemen as part of the National Dialogue Conference. However, each camp calls the other names that primarily have religious connotations. For Houthis, Salafists are takfiris, while Salafists perceive Houthis as “Rafida” [defectors]. These are terms that have been employed by the warring religious and political factions since the beginning of the 17th century, although the term takfiri is of recent origin.

Nevertheless, armed conflict between these factions is linked to developments in the political situation in the country. This is a clear indication that these conflicts have political backgrounds. As the period of the national dialogue in Yemen is coming to an end with the ostensible transition to a new political situation, Houthis have clashed with their opponents on at least four fighting fronts in four different governorates (Ibb, Dhamar, Imran and Saada). The conflict in the Saada Governorate is still raging, with hundreds of people on both sides having been killed and wounded.

The same applies to al-Qaeda, as it is a religious organization. It has been behind most of the assassinations and bombings in Yemen with every political development, as is the case today. These assassinations are carried out according to fatwas issued by sheikhs who believe in the ideology of jihad against others and call themselves "Ansar al-Sharia.”

In light of the weak public education system in Yemen, many institutions and centers for religious education have spread throughout the country in the past decades. Some of them are funded by the government such as the scientific institutes that used to be run by the Muslim Brotherhood until they were canceled in 2001. Thus, the Muslim Brotherhood turned to private education, employing the same means and nurturing the same goals of seeking to deploy religious ideology in the political mainstream that advocates this ideology — or in other terms supporting political theory that is based on a religious background.

In the early 1980s, the Salafist religious center of Dammaj in the Saada Governorate also became a source to spread Wahhabism, as Yemeni Sheikh Mokbel al-Widahi, the center's founder, returned from Saudi Arabia — after having worked there as a laborer and become involved with Wahhabism  — for this purpose

This provoked the Zaydi forces, which rejected the expansion of the Wahhabist movement at their doorstep. This expansion was encouraged by the Yemeni authorities and supported by Riyadh. However, the Zaydis did not express their rejection in practice until the early 1990s, as the Yemeni authorities were pitting camps against each other when needed. This is not to mention the undeclared official Yemeni policy that promoted the dissemination of Salafism, because it emphasized the necessity of obedience to the ruler and because the movement was not associated with any political activity, until the establishment of the Rashad Union Party in 2012.

In the face of the Salafist (Wahhabist) tide, there has been much Zaydi religious education spreading Zaydi teachings. The Zaydi sect then developed to embrace Shiite Twelver doctrine (Iran's official doctrine) by the turn of the millennium.

This resulted in the establishment of the movement of Ash-Shabab al-Mumin (Believing Youth), which in turn developed with the emergence of the Houthi movement, calling itself "Ansar Allah."

The movement fought six wars with the Yemeni state from 2004 to 2010. It is currently waging a war against Salafists, while raising slogans such as “Death to America.” Yet, while these chants never reach the ears of any Americans, the fighting continues to kill Yemenis day after day.

One of the most prominent leaders in the Islamist Islah Party (Yemeni Congregation for Reform) admitted that the religious education curriculum has had serious repercussions on the country’s social unity. An Asharq Al-Awsat article on May 22, 2002, quoted him as saying, "The curriculum in some of these institutes provides fertile ground for extremism. However, not all the religious education centers are the same.”

Perhaps he was excluding the scientific institute that used to be affiliated with his organization at the end of the era of former President Ali Abdullah Saleh (1990-2012) from accusations of extremism. At the time, with the support of the president, many religious universities were established including the Iman University, which was headed and run by reformist cleric leader, the radical and controversial Abdul Majeed al-Zindani.

This university was the cause of the first media uproar against the government of national reconciliation, which granted it $10 million from the state treasury under the pretext that previous authorities had agreed to grant this amount to the university to establish a mosque on its campus.

This is especially noteworthy given that the same government refused to grant no more than a few thousand dollars to other universities, despite similar directives in this regard on the part of previous authorities. This is due to the fact that Zindani has been a powerful leader in the Islah Party since 2011, as explained by many at the time.

Conflict between religious pulpits and the media

In mid-July, during the holy month of Ramadan, an armed conflict took place between Houthis, Salafists and people affiliated with the Muslim Brotherhood, following the prayers in one of the mosques in the capital Sanaa. The conflict soon turned into a media storm as parties hurled accusations of religious intolerance at one another.

It is no surprise that these factions are fighting to control mosques, given the fact they are the most important means to disseminate religious thinking. Mosques also provide opportunities for preachers to meet directly with worshipers who fervently and in good faith believe in their sermons. One can easily recognize the great difference between the Friday sermons in different mosques and the gap between religious movements undertaking political acts.

To keep up with the age of information and communication, each political/religious movement has its own website to disseminate its ideas and concepts, including al-Qaeda. However, the most powerful, well-organized and funded movements have their own satellite channels, so as to reach the widest audience possible, since there are not many Internet users in Yemen. The Islah Party launched the Suhail TV Channel, owned by its leader Hamid al-Ahmar. Meanwhile, Houthis launched Al-Masira TV Channel from Beirut. The Yemen Youth TV Channel is closer to the Islah Party, while Al-Sahat TV is closer to the Houthis. At the media level, both political and religious movements present themselves strong.

All religious political forces are practically against the civil state sought by Yemenis. The head of the Iman University and his son made scathing comments against those who agreed to adopt the constitutional principle stating that the Islamic religion is the major source — instead of the “exclusive source” — of legislation in Yemen during the discussions of the National Dialogue Conference. The son has even published a list of their names to threaten them. He tried, as his father did in the early 1990s, to transform the wording of the constitutional article from Sharia being a major source for legislation to a source for all legislation, or one source.

Moreover, Zindani and his advocates have gone as far as to claim that the civil state aims at spreading homosexuality and upholding gay marriage, among other convictions, which are in direct conflict with the beliefs of most Yemenis, so as to mobilize against the constitutional text. One of his students has also written a book in this regard, which provoked an intellectual debate with the famous Yassin Saeed Noman, secretary-general of the Yemeni Socialist Party.

The essential difference between the Sunni and Shiite movements is doctrinal and lies in the fact that Sunni movements adopt the principle of the “governance of God,” which means that all legislations in the state ought to be based on Sharia: “And whoever does not judge by what Allah has revealed — then it is those who are the disbelievers.” (Surat Al-Maidah, 5:44)

Shiite movements in Yemen, on the other hand, base their belief on the principle of the Imamate as of one of the fundamentals of Islam. They believe that the ruler should be a descendant of the Prophet Muhammad and his grandsons — Hassan and Hussein in particular — who are the offspring of his daughter Fatima.

The strangest thing is that some Yemenis, who are closer to being secular and more liberal, fall prey to such discussions about who should be the rightful ruler, and they take part with one camp against the other. This is especially true, even if they are not practicing their religion and some of them go as far as to make fun of the rituals.

There is a joke that has recently been going around secular elites: “A man was drinking liquor but left one-fifth of the bottle for the Prophet’s family.”

The political and religious movements, which are fighting among themselves, agree on shedding blood — contrary to the teaching and principles of Islam — and the prohibition of music and singing.

This is politics that has no religion.