Mohammed Nasser Al-Bakhiti, representative of Ansarullah (the Houthis’ movement) to the National Dialogue talks, discusses his party’s vision for Yemen in an exclusive telephone interview with Al-Monitor. 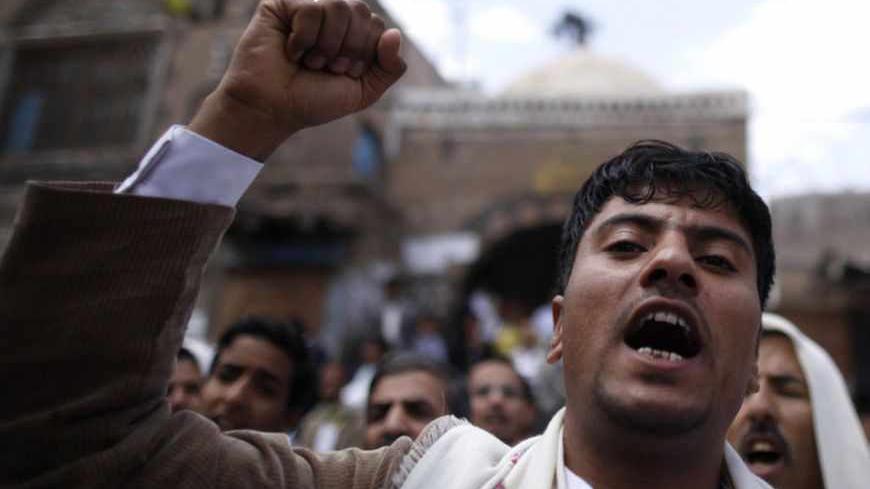 Protesters loyal to the Shi'ite al-Houthi rebel group shout slogans during a demonstration to protest against what they say is U.S. interference in Yemen, including drone strikes, after their weekly Friday prayers in the Old Sanaa city April 12, 2013. - REUTERS/Khaled Abdullah

Mohammed Nasser Al-Bakhiti, the representative of Ansarullah (the Houthis' movement) at Yemen's National Dialogue Conference, told Al-Monitor in a phone interview about his group’s new religious-political approach for Yemen.

Bakhiti asserted that his movement has a great interest in the success of the national dialogue, indicating that the regime's old guard, the Islamic party of Islah (which combines Salafis and Muslim Brotherhood members) and the Al-Ahmar family don’t want the dialogue to succeed.

He added that these powers promote the continuation of corruption in order to protect their interests.

The Houthi official said that his group’s new approach for Yemen calls for building a civil democratic state. He added that this approach supports a federal parliamentary system in Yemen based on a “relative electoral Law,” because this system will be able to dismantle the former regime.

Bakhiti added that the “General People's Congress,” party of former President Ali Abdallah Saleh, is also going to support a federal parliamentary system because that process would weaken its adversaries inside the presidential regime. He said the Islah party doesn’t prefer this option.

Bakhiti declared that the federal system serves his group since they are mainly based in Sanaa, Saada, Al-Juff, and Hajja provinces, which are Zaydi strongholds.

The Houthi senior official stated that state-building must be based on a real partnership between all forces inside Yemen, as a result of consensus between them. He says they should not adopt one thought or another, even if they seek to impose a religious state, whether that state is Sunni or Salafi or Zaydi. He added, “We say the civil state should be the result of consensus between the various forces, based on equality and justice to all citizens, regardless of their political or religious or ethnic backgrounds.”

The recent “intellectual and cultural manifesto” signed by Houthi leaders Abdel Malek Al-Houthi and Hussein Yehya Al-Houthi, as well as other Zaydi senior clerics, was seen by their adversaries as a return for the Imamate’s rule. But when asked about his call for a civil state, Bakhiti asserted that the manifesto does not conflict with the civil state, since it is a religious document only oriented to the Zaydi public in terms of denying the allegations that Ansarullah has adopted Shiite Ithna Ashari thought.

Bakhiti asserted that the Zaydi doctrine of the Imamate does not necessarily oppose the civil state because Ansarullah does not say that the state should adopt Zaydi thought, or that the Yemeni president must be from this Hashemite strain. He explained that the group’s new approach is that the ruler should follow the principles of Islam and the values of Quran, because it is not possible to establish an Islamic state based on sharia in Yemen today. He compared this attitude to Hezbollah’s situation in Lebanon; it is a political Islam group, but it could not implement the Velayat Al-Faqih state there.

What are Ansarullah's goals then?

Bakhiti stated that his group’s project is to mobilize the nation through the return to the Quran, and to support resistance movements against occupation, colonization, and interference in the Muslim world, especially the American and Israeli hegemony.

It is worth mentioning that Houthis have raised the slogan, “Death to America, Death to Israel,” a slogan that had originated with the regime's military campaign of 2004-2010.

When asked about the movement’s expansion to other provinces outside of Zaydi areas, Bakhiti refused to call it "expansion," indicating that they have the right to spread their thought to other parts of Yemen, to the other political parties and religious currents. He wondered why the expansion of Houthis is being exaggerated, and about silence concerning US intervention and its drones in violation of Yemen’s sovereignty.

The Houthi official denied the allegations that they are allied now with former President Ali Abdallah Saleh, indicating that Saleh is still in “the hands of Saudis and Americans.” He added that Saleh was against his movement and the family of Badr Eddin al-Houthi from the beginning, and he supported the trend that opposes Hussein al-Houthi inside the Zaydi school. He affirmed that Saleh attempted to employ movement against the Salafi groups after the attacks of September 11, and that Hussein Badr Eddin al-Houthi was the only cleric who objected to the suppression of Salafists at that time. Thus Ansarullah called to the opposition groups during the revolution period (2011 -2012) for the isolation of Saleh, then refused the “Gulf Initiative” deal because the former president was part of it.

When asked about relations with new president Abd Rabbuh Mansour Hadi, he responded that Hadi is the legacy of the former regime and has no real power.

When asked about the reasons for alliance with the Southern Movement, Bakhiti emphasized that there has been a rapprochement between the two movements because both were suppressed and attacked by the former regime, both reject the pillars of the corrupt regime, and both have suffered oppression from the General People's Congress and the Islah party. He added there were fatwas by the Islah party that allow shedding the blood of southerners, including women and children, while Badr Eddin al-Houthi refused to issue a fatwa requested by the regime to allow the 1994 war against the south.

Regarding the tensions with the Salafi groups in the northern Sa’ada province, Bakhiti said there is a calm now, stating that Salafis were provoking clashes with Houthis from their educational institution in the town of Dammaj, which is located in a Zaydi area, preaching a Salafi wahhabi anti-Shiite Zaydi system of thought.

What is the Houthis' attitude towards Saudi Arabia after the 2009-2010 clashes?

Bakhiti said the situation is quiet now, asserting the importance of being good neighbors with Saudi Arabia, and revealing that their control of the Yemeni border with the kingdom had stopped drug smuggling and infiltration of terrorist groups from Yemen. During the clashes with Saudi forces in 2009-2010, the Houthis took control of more than 40 military Saudi positions, and launched Katyusha rockets into the Saudi soil.

Saudi authorities have accused the Houthis of being instruments of Iranian influence in the Horn of Africa and the Red Sea.