What is the relationship between Iran and Yemen's Houthi community? 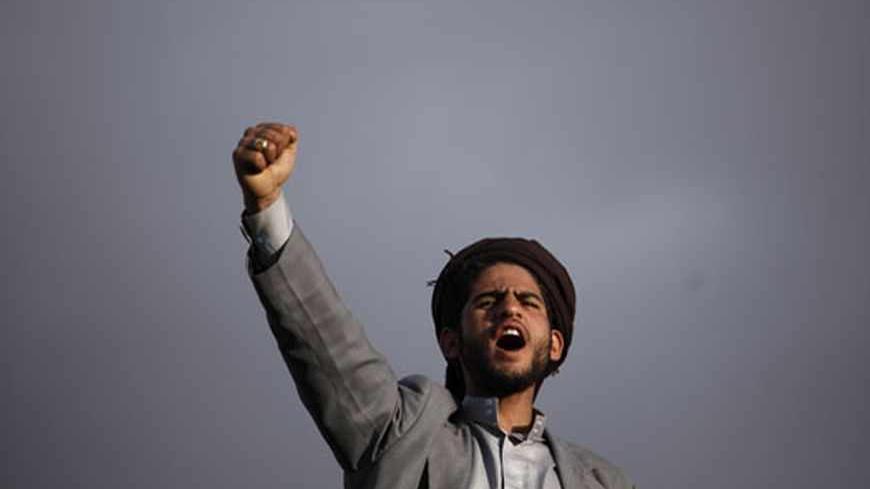 A supporter of the Shiite Houthi rebel group shouts slogans during a demonstration in Sanaa, against the deportation of Yemeni laborers from Saudi Arabia, April 5, 2013. - REUTERS/Khaled Abdullah

On May 10, the president of the political council of the Houthi movement (Ansarullah) in Yemen, Saleh Habra, met the Iranian ambassador in Sanaa, Mahmoud Hassan Ali Zadeh, in a first public meeting between the two sides.

The Houthi movement, which was founded in 1992, takes its name from formal leader Hussein Badreddin al-Houthi, who was killed by the Yemeni army in September 2004.

The senior representative of the Houthis in the National Dialogue Conference, Mohammed Nasser al-Bakhiti, confirmed the meeting and told Al-Monitor in a phone interview that the Iranian ambassador had visited Habra in his office in Sanaa.

Anti-Houthi (Yemeni) websites claimed that this is not the first meeting and that there were several secret meetings between Iranian and Houthi officials. They added that the meeting’s aim was to urge the Houthi movement to fabricate a problem as a pretext to withdraw from the National Dialogue Conference, because the dialogue would hinder their plans of the recovery of the Zaydi Imamate’s rule. Al-Karama quoted undisclosed sources that the Iranian ambassador expressed his resentment over tightening Yemeni security that recently prevented smuggling weapons to the Houthi movement.

Bakhiti denied all of these allegations and stated that there were no secret meetings between Houthi and Iranian officials, and that the meetings focused on cooperation between the two sides in the interest of Yemen and Iran. He asserted that the meeting was not directed against anyone, in reference to the accusations of ruining the national dialogue.

The Iranian ambassador considered the recent accusations of the US ambassador in Yemen, Gerald Firestein, over the foreign interference in the internal affairs of Yemen, a cover for US interference in the affairs of the Yemeni people. He added that Iran has supported Yemen’s unity and its national dialogue — conditioned on refusing foreign states’ interference in Yemen — indicating that US intervention would upset the Yemeni people. Firestein has accused Iran and Hezbollah of funding the Houthis and providing them with arms, while Tehran and the Lebanese resistance party have always denied that.

It is noteworthy to mention that Yemeni-Iranian relations have experienced a chill since June 2004, after the first war between the Houthi movement and the regime of former President Ali Abdullah Saleh. Sanaa has repeatedly accused Iran of supporting the Houthis.

When asked whether Iran is funding the Ansarullah group and arming it, Bakhiti responded that there was no such support from Tehran, asserting that the relationship with the Islamic Republic of Iran is based on common principles and objectives, one of which is the strategic interest of Yemen since the movement believes that Yemen should be a strong state liberated of US hegemony. He added that the United States and its allies want Yemen as an unstable country for their own interests.

The Palestinian cause is another common strategic point with Iran and Hezbollah and Hamas, said Bakhiti, indicating that they all want to put an end to the Israeli occupation of Palestine and confront the US occupation of Arab and Muslim countries such as Afghanistan and Iraq.

When asked whether there is a factual cooperation between Ansarullah and Iran and Hezbollah in the resistance of the Western and Israeli occupation, Bakhiti asserted there is no cooperation in this context, and it is just a spiritual-religious connection over these issues.

He also denied any meeting has been held with Hezbollah officials, as per the Yemeni, Saudi and US governments’ allegations.

One can be skeptical about the Houthi denial of those accusations and wonder what the nature of the relationship is between them and Iran and Hezbollah. Is it the Shiite religious connection?

Bakhiti refused to admit that the connection is due to them sharing the Shiite faith, and stated that his group is over the sectarian issue, and that Ansarullah does not only represent the Zaydis in Yemen, revealing that it includes Muslims from other schools such as the Sunnis and the Shiite Imamate, or Ithna Ashari (Twelver).

This new approach of the Houthi movement has surprised me, since the Saleh regime has accused the Houthis of converting to Ithna Ashari, being inspired by Iran’s revolution and Hezbollah’s victory in its resistance war against the Israeli occupation of Lebanon (1982-2000).

The Zaydi school shares with the Ithna Ashari/Twelver school the belief in four imams from the Prophet Muhammad’s family (Ahl-al-Bayt): Ali Bin Abi Taleb and his sons Hassan and Hussein, and Hussein’s son, Ali, also known as Zayn al-Abidin. The dispute between the two Shiite schools started when Zayd (695-740), son of Imam Zayn al-Abidin, revolted against the Umayyad caliph he felt was unjust. Zayd was killed in battle in 740 by the Umayyad governor who sent his body to Caliph Hisham in Syria, where it was placed on the gallows entirely naked.

At that time, the imam, according to Ithna Ashari, was Muhammad al-Bakir, the eldest son of Zayn al-Abidin. Zayd believed that an imam should fight the unjust ruler, instead of watching under the pretext of Taqiyaya (a form of religious dissimulation) that Ithna Ashari imams used to follow to protect their lives from the autocratic rulers.

Thus, the Zaydi school defined the two most important conditions of the imam: First, he should be from the Hashemite Alawite descent, grandson of Ali Bin Abi Taleb. Second, the imam should declare his Imamate and revolution against the autocratic ruler. These conditions do not limit the imams in the 12 infallible imams appointed by Allah and his prophet, as believed by the Ithna Ashari school. That is why the Zaydi Imamate lasted from the 8th century to the “republic revolution” of 1962, that toppled the Imamate’s rule in the North of Yemen.

Bakhiti did not deny that connection and said to Al-Monitor that since the majority of members of the movement are Zaydi and believe in the Imamate of the prophet’s family, but that the new approach of the group is that the ruler should follow the values of Islam, and he should not necessarily be from Hashemite descent. Bakhiti elaborated on this approach and the attitude toward the national dialogue, the new regime, the case of the South and federalism’s call, the relation with the former president and the tension with Salafi groups and Saudi Arabia. That will be next article’s topic.