Yemen's Houthi movement might be heading toward military clashes in Sanaa to force the government into meeting its demands. 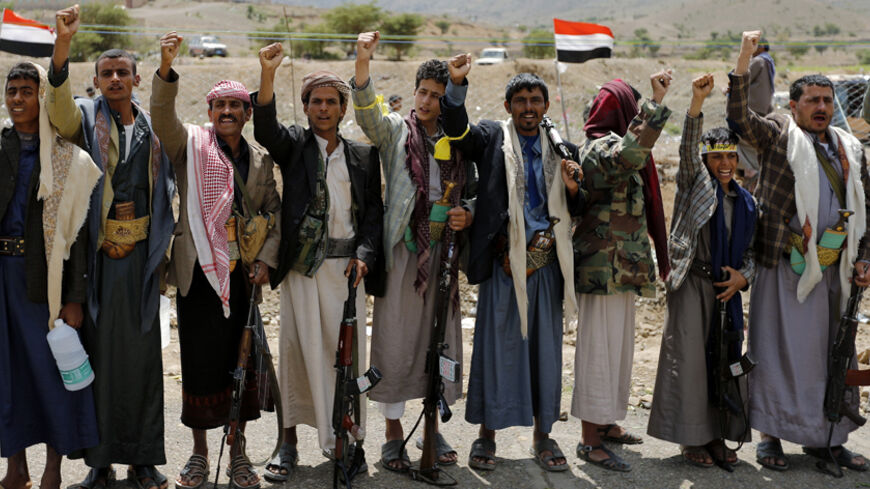 Followers of the Shiite Houthi group attend a gathering at the group's camp near Sanaa, Sept. 10, 2014. - REUTERS/Khaled Abdullah

Since Yemen’s National Dialogue Conference (NDC) was completed in January, the military conflicts have become even more acute — most prominently the battle in the north Yemeni city of Amran. Since then, not a single step has been taken to end Yemen’s political transition process and hold the elections, which were planned for February, after being postponed for 23 months. Instead, the country is heading in the opposite direction, toward war and political deadlock.

This contradictory path governs all of Yemen, particularly the Houthi movement, which has been ruling the Saada governorate that borders Saudi Arabia for more than three years now. The group’s rule represents the worse and most oppressive model of governance, as it runs Saada as a radical religious armed group that bans music, for instance. Pictures taken at Houthi sit-ins show that women are absent. Al-Monitor attended a sit-in on Aug. 30 next to the Interior Ministry, and asked the media officer of the Houthis why no women were present; the answer was that women should stay home.

However, at the NDC, the Houthis supported the demands of the women's movement, including the quota (Houthis supported the demands of women to have a fixed share of political participation). NDC member Thurayya Damaj told Al-Monitor, “The Houthis’ position vis-a-vis women in the capital Sanaa is completely different than their position as a ruling authority in Saada. They supported the quota in Sanaa, but tightened women's freedoms in Saada governorate by imposing restrictions on their movement and clothing.”

There are several reasons for the Houthis’ dualism, such as the difference between the authority of the Houthi movement as a ruler in Saada, and its oppositionist role in Sanaa, where it presents itself as an appealing party compared to the rest of the political parties in Yemen, particularly the Yemeni Congregation for Reform. More importantly, the Houthi group does not deal seriously with the political process in Sanaa, including the NDC, as they have not made any political achievement so far — except by using weapons — since its inception during the 2004 war in Saada.

The Houthis adopted the same dual policy in Sanaa to topple the regime and prevent an increase in oil prices, under the pretext that these are peaceful popular demands. At the same time, its armed wing besieges Sanaa, while its negotiations with the government are focused on taking part in the state’s sovereign decision, i.e., achieving a presence in the leadership of the sovereign institutions such as the army and security establishments. In addition, the Houthis called for a technocrat government, while they appointed arms dealer Fares Manaa as Saada's governor.

The Houthis do not only rely on weapons. What is more important is its presence in the state institutions and its broad infiltration in the army, which is divided between the pro- and anti-regime camp — a division that is related to the regional background of the Yemeni political elite. The Houthis are present in the far northern parts of Yemen — namely Sanaa’s northern and surrounding areas with a Zaydi Shiite majority — while a Sunni majority is present in the southern parts of Sanaa, starting in the Yarim area. In modern history, after the Ottomans departed Yemen following World War I in 1918, the Zaydi Imamate ruled northern Yemen, which was outside the control of the British and did not only include the Zaydi areas but extended to the south and included large parts of the Sunni-majority areas, too.

The Zaydi sect is close to the Sunni sects, yet with a different vision of the Imamate, with the Zaydis considering it limited to Ahl al-Bayt (the family of the Prophet Muhammad). For this reason, the September 26 Revolution that erupted in 1962 in the north to overthrow the Imamate system targeted the Hashemites (Ahl al-Bayt) and oppressed Zaydi clerics. And when President Ali Abdullah Saleh took power in 1978, the country moved toward Wahhabism, and the promotion of Salafist education became an official matter supported by the authorities, especially in the Zaydi areas. This provoked many Zaydi scholars who began to establish their own school, the Youth Believers, which started its activity in 1990. The Houthi group, which engaged in an armed conflict against the state in 2004, emanated from this school.

By virtue of the sectarian nature of the Imamate system, the modern Yemeni army was established in the early 20th century, based on the sectarian Zaydi foundations. It preserved this nature until after the establishment of the republic; the September 26 Revolution was initiated by a movement in the army in the 1950s and 1960s, similarly to other Arab countries that became republics.

Thus, all the presidents of Yemen under the republican regime were military men from the north Zaydi regions, with the exception of Judge Abdul Rahman al-Iryani. Yet, from 1967 to 1973, sectarian loyalty was replaced by regional loyalty and fanaticism for the north Zaydi regions, which monopolized the army and the rest of the state institutions. In the era of President Saleh (July 1978-February 2012), the leading positions in the army became restricted to his own Sanhan tribe, which is part of the Hashid tribe.

After the revolution of 2011, President Abed Rabbo Mansour Hadi, who hails from the southern governorate of Abyan, took power. He brought with him the Yemeni Congregation for Reform Al-Islah Party — a tribal, Sunni Islamist alliance. This raised the ire of the residents of these regions, particularly those affected by the restructuring of the army.

Members of the tribe of former President Saleh were replaced by members affiliated with Hadi, the new president, who was unable to unify the army due to the profound influence of Saleh and Gen. Ali Mohsen within the army. This opened numerous fighting fronts against Hadi.

The Houthis succeeded in addressing the regionalism expressed against the southern head of state, as well as the sectarianism against Al-Islah Party expressed by senior army officers, security leaders and other state employees, as well as Hashemites. The latter felt bitter for having been excluded from power since 1962. Even though they were entrusted with some state leadership positions, they remained excluded from some institutions such as the army and security.

The first failure suffered by the Houthis is failing to infiltrate the army and provoke large-scale defections within its ranks. This failure is due to the discovery of their network within the army, a source close to the president told Al-Monitor in an exclusive statement. The source estimated that more than 30 senior officers were arrested for having communicated with the Houthis. This foiled the Houthis' scheme, which would have led to the defection of at least three major brigades within the army by proclaiming what they call a popular revolution to overthrow the government and reject the rise of oil prices.

The source added that there is an Omani mediation between Iran and the Yemeni government to reach a solution. According to the source, the president rejected Iran's request for direct negotiations with the Yemeni state since Iran is funding three Yemeni channels inciting against the Yemeni government and supporting the Houthi movement in the north and south.

The same source also ruled out the possibility of armed clashes, since the state will massively interfere in Sanaa and will cause the Houthis a major defeat. Moreover, even if the presence of pro-Houthis within the army — whose identities are yet to be revealed — is not ruled out, clashes still represent a great risk to the Houthi movement. The other failure of the Houthis is their inability to stage highly popular demonstrations outside the circle of their supporters of the same sect, while their opponents organized highly popular demonstrations with more participants, especially the one that was held on Aug. 25.

Yet, this did not curb the Houthis’ arrogance and they refused the president's initiative announced on Sept. 2. The initiative aims at reducing oil and oil derivatives prices by 30% so that the state bears the value of transportation, forming a government of national unity following the NDC that involves the Houthis and the Southern Movement, while the president reserves the right to appoint ministers to hold “sovereign portfolios” such as the ministries of Finance, Foreign affairs, Defense and Interior. The initiative also aims at extending the state’s influence over the republic's territory and stopping armed escalation by the Houthis inside the capital.

The Houthi movement was aspiring to be a popular hero by canceling the increase of oil prices and achieving a political victory through its participation in sovereign ministries. Thus, it is difficult for the Houthis to accept Hadi's initiative, despite their awkward position given the weakness of their popular base compared to their opponents' large numbers and the absence of any defects worth mentioning within the army.

Therefore, the situation is about to become worse on the military level in other areas in Yemen, such as al-Jawf governorate to the east, while Houthis might be heading toward limited military clashes in Sanaa to put pressure on the state to meet their demands. On the other hand, the Yemeni state, with its divided army, is forced to be patient with the Houthi movement until the latter loses its dualism.