Iran believes its influence is spreading to a new country with the rise of the Houthis in Yemen in September 2014; however, Yemen is different from other Iranian-influenced countries (Syria, Lebanon and Iraq), where sectarian compositions differ. 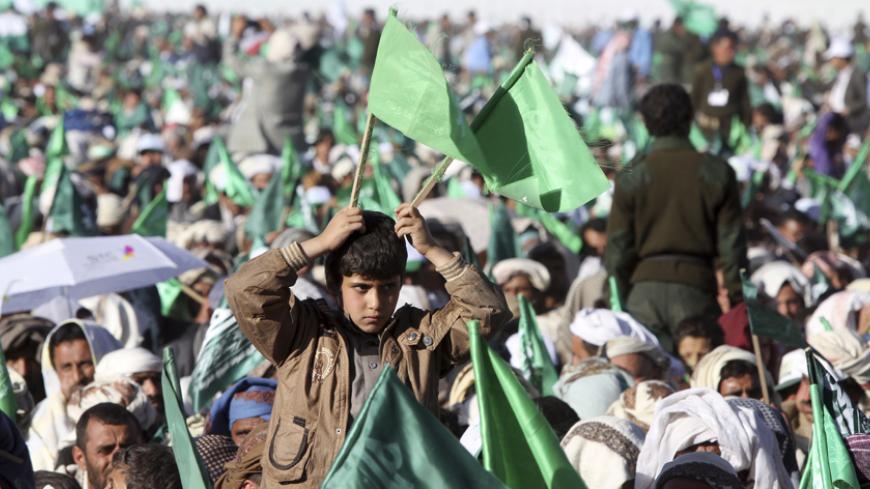 A boy holds up flags of the Shiite Houthi movement during a ceremony commemorating the birth of Prophet Muhammad in Sanaa, Jan. 3, 2015. - REUTERS/Mohamed al-Sayaghi

Ever since Sanaa fell into the hands of the Houthis on Sept. 21, 2014, Iranian officials have been rejoicing with their new victory in Yemen, which they consider a new land to spread their influence. The most popular statement was made by the Tehran city representative in the Iranian parliament, Alireza Zakani, who said that Sanaa was the fourth Arab capital to fall into the hands of Iran after Beirut, Damascus and Baghdad. But, how feasible is it to compare the rampant chaos in Yemen and the absence of the state in Sanaa to the situation in Beirut, Damascus and Baghdad?

Iranians are very wrong to believe that the delicate situation in Yemen ended with the Houthis’ control of the capital. In Beirut, Iran has extensive influence held by Hezbollah, which is playing its political role as part of a specific and clear process divided among different parties. In Syria, the sectarian dimension of the regime has only just appeared. In the past, this dimension was marginal in a regime leaning more to nationalistic dictatorships, such as the Baath Party in Iraq. In Iraq itself, the situation is also different. A sectarian regime was established there and favored Shiites after the US invasion in 2003. However, in Yemen, things are completely different, since there is no state and the real power of the president and government is almost totally absent.

The Houthis, who did not abide by the Peace and Partnership Agreement that they had signed on the eve of Sanaa’s fall on Sept. 21, are not moving according to a political framework or system. They refused to withdraw their militias from the cities they had taken control of, while still expanding on the military level and marginalizing the other political powers whose enmity toward them is growing. Moreover, the local communities outside the Houthis’ tribal-sectarian strongholds in the north are rejecting them. However, this military expansion cannot persist in an armed society where some political forces have military wings, such as Al-Islah Party and the General People’s Congress, amid an unclear political situation and in the absence of a state.

Iran completely relies on its sectarian influence in these countries. Here, Yemen seems different yet again. The Zaydi sect in Yemen is part of the Shiite sect, but it is different from the Twelver Shiite Islam in Iran, which prevails in Iraq and constitutes Hezbollah’s sect also. In Syria, the Alawite sect was linked to Shiism, not only due to sectarian common grounds but also due to the shared resistance against Israel. Still, Yemen’s situation tells a different story. Although the traditional Zaydi authorities are worried about the rise of Iranian influence in their country, some Zaydi students have been traveling to Iran to study in Shiite seminaries (hawzas).

As for the sectarian composition, Lebanon is a multiconfessional country, where almost all sects are equally represented. In Iraq, Shiites outnumber Sunnis, while in Syria, although Alawites constitute a minority, the old nationalistic nature of the regime tones down sectarianism. In Yemen, however, Houthis rose to power in 2004, when Iraq and the region entered the sectarian strife. This is to say that Houthis constitute a purely sectarian group, but their sect comprises one-third of Yemen’s inhabitants. What’s more, they do not exactly represent Zaydism, since they attacked some Zaydi mosques, and their relationship with some popular Zaydi authorities is bad.

Geographically, Yemen is considered the farthest among the Iranian influence regions, unlike neighboring Iraq and nearby Syria and Lebanon. Iran and Yemen are miles apart, not just geographically but also politically. This makes the task of inheriting the wide Saudi influence in Yemen that dates back to decades a tough one.

Undoubtedly, it wasn’t until the Saudi influence dwindled in Yemen due to the disintegration of the Yemeni political system’s structure in 2011 that the Iranian influence surfaced. The Gulf Initiative could not save the structure of the regime supporting Saudi Arabia after its wide divisions. Moreover, the Saudi politics vis-à-vis Yemen became unstable after the death of Crown Prince Sultan Bin Abdulaziz in 2011, who had handled the Yemeni issue since the outbreak of the revolution in 1962. Then, his successor, Crown Prince Nayef Ali Bin Mohammed al-Hamdan, who became in charge of the issue also died in 2012, leaving the Yemeni affairs in the hands of the disputing ruling family. Former Saudi Ambassador to Yemen Ali Bin Mohammed al-Hamdan then took over Yemeni affairs after the death of Prince Hamdan in 2012. This depicted the general situation of the kingdom — one marked by declining power and problems. However, the situation in Iran does not seem much better, as its power is being drained on several battlefronts, and it is facing many economic and political challenges.

Houthi militias benefited from the political vacuum and the state of chaos that prevailed after 2011 to spread their influence, which is yet another reason for their weak control. Iran is relying on a group (the Houthis) whose leader enjoys a religious power that most Yemenis do not believe in. This leader does not have exceptional personal traits or political experience that make him eligible to maintain the position he gained thanks to the political vacuum. The Yemeni figures that Saudi Arabia relied on, however, are completely different, as they extracted their power from the tribes and state alike and had wide political experience and cleverness. At the forefront of these figures was Ali Abdullah Saleh.

Saudi Arabia relied on Yemen to spread its influence through several axes. Those include the tribal loyalties and the large Yemeni diaspora in Saudi Arabia, which is estimated at millions of people and comprises a remarkable network of traders. The political parties, such as Al-Islah Party, constituted another axis, along with the Yemeni state headed by Saleh. Saudi Arabia was seeking to keep the Yemeni state weak and did not mind supporting it financially if it faced a critical economic situation. Iran, however, is only betting on the religious axis through its media-backed channels such as al-Mayadeen, and the local al-Masirah and al-Sahat channels by buying off journalists, and it does not deal with the state.

Iran and Saudi Arabia have one common ground: religious preaching. But, Saudi Wahhabi preaching was widely spread in mosques and religious institutions and affected the government educational curricula. This has tightened the noose around Zaydis and their religious practices, as well as Sufis whose mosques and antiquities were destroyed and neglected. Houthis walked on the same path, by clamping down and being hostile to other sects. They went up a notch and bombed Salafi mosques in front of TV cameras that broadcasted the incident like it was regular programming. They also expelled Dammaj’s Salafists and Bani Salem’s Jews from Saada, which is probably linked to the Houthis’ involvement in a violent regional, sectarian conflict.

In the past, the Yemeni state was weak and was founded on a wide network of tribal loyalties guaranteeing that it would not collapse. The tribes had their historical norms and customs in times of peace. However, the Yemeni state has collapsed, and in its place, chaos and bloody sectarian strife have thrived. Tribal norms are no longer strong, and they cannot guarantee social peace. Under these chaotic circumstances, it seems a bit too soon to talk about a dominant Iranian influence in Yemen.