Statements by Iranian officials about the importance of the rise of Houthis in Yemen demonstrates that Iran would like to give the perception that there is a new member of the axis of resistance. 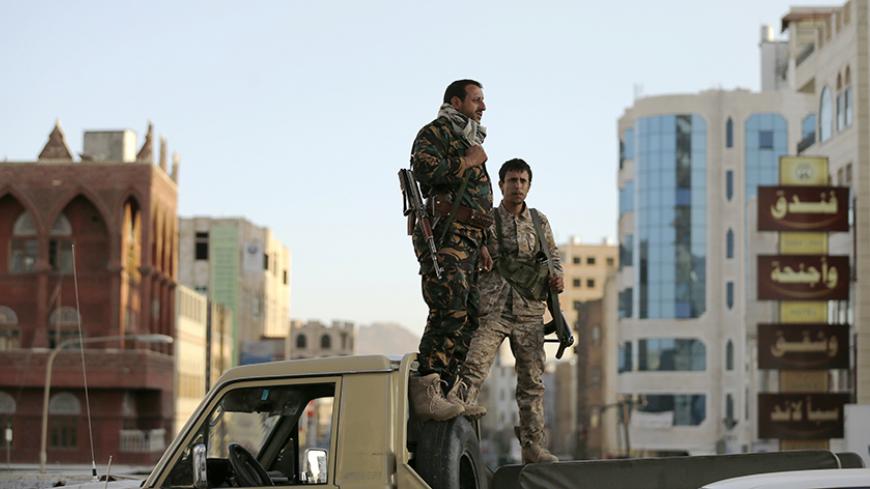 Houthi fighters stand on a truck as they secure a street where pro-Houthi protesters demonstrated to commemorate the fourth anniversary of the uprising that toppled former President Ali Abdullah Saleh in Sanaa, Feb. 11, 2015. - REUTERS/Khaled Abdullah

On Jan. 22, the embattled Western- and Saudi-backed president of Yemen, Abed Rabbo Mansour Hadi, and his Cabinet resigned. Immediately afterward, the Houthi Shiite rebels, who have controlled the capital Sanaa since September and are officially organized under the banner of Ansarollah (God’s Partisans), announced that they seek “a peaceful transfer of power.”

Despite some differences in their religious beliefs, when it comes to foreign policy, very little separates the Iranian Twelver Shiites from Houthis, who are Zaidi Shiites. The political narrative that Houthis have propagated is “Death to America, Death to Israel,” which is modeled on revolutionary Iran's motto.

Houthis adhere to a branch of Shiite Islam known as Zaidism. Their name is derived from Badr al-Din al-Houthi, the group’s leader during the uprising in 2004 that sought autonomy for their heartland, Saada province, and protection for their tradition against Sunni domination. Saada province is in Yemen's northwest and sits adjacent to the southwest border of Saudi Arabia. According to some estimates, Zaidis make up one-third of Yemen’s 25 million population.

A series of statements by Iranian officials shed light on Iran’s point of view: Yemen is now within Iran’s sphere of influence and is viewed as a new member of the “axis of resistance,” which encompasses Syria, Lebanese Hezbollah and Iraqi Shiite militants. This axis is an Iran-led alliance of state and non-state actors in the Middle East that seeks to primarily confront Western interests and Israel.

Aside from shared regional objectives, another pillar of the axis is Iran’s extensive material, financial, training and logistical assistance to the members of the grouping.

On Jan. 25, Hojatoleslam (a Shiite clerical rank just below that of ayatollah) Ali Shirazi, representative of Supreme Leader Ayatollah Ali Khamenei to the Iranian Revolutionary Guard Corps (IRGC) Quds Force, said, “Hezbollah was formed in Lebanon as a popular force like Basij (Iran’s militia). Similarly popular forces were also formed in Syria and Iraq, and today we are watching the formation of Ansarollah in Yemen.”

In both statements, the likening of Ansarollah to Hezbollah could be interpreted as Iran’s involvement in financing and weaponizing Ansarollah as it does for Hezbollah.

The former speaker of Iran's Majles, Ali Akbar Nategh-Nuri, who heads the Office of Inspection of the House of the Supreme Leader, has also added Yemen to Iran’s new sphere of influence, maintaining on Jan. 31, “We witness today that our revolution is exported to Yemen, Syria, Lebanon and Iraq.”

In October, Hojjat al-Eslam Ali Said, the supreme leader's representative in the IRGC, touted Iran’s growing influence by saying, “The Islamic Republic’s borders … are now transferred to the farthest points in the Middle East. Today, the strategic depth of Iran stretches to Mediterranean coasts and Bab al-Mandab Strait [southwest of Yemen].”

In addition, there are claims that Iran is directly involved in sponsoring the Ansarollah (Houthi) movement.

In September, according to Reuters, the Yemeni government freed “at least three suspected Iranian Revolutionary Guard members … who had been held for months over alleged ties to” Ansarollah.

Hussein Al-Bukhaiti, a Houthi activist who is familiar with the inner workings of the group, has denied the story as “false claims about the involvement of Iran” in Yemen’s developments.

Despite some reports about Iran’s material support and training to Ansarollah, Houthis have continually denied allegations that they are proxies for Iranian foreign policy objectives but have admitted Iranian backing due to a shared vision in confronting “the American project."

Former Yemeni officials continually complained about Iran’s intervention. As a glaring example, they stressed the “Jihan 1” affair as evidence. Allegedly the ship Jihan 1 was seized by Yemen in 2013 and was smuggling weapons from Iran to Yemeni insurgents. Iran denied any connection to the incident.

Meanwhile, Ali Al-Bukhaiti, a prominent member of the group’s political arm, said, “Iran is not so stupid so as to send this big quantity of weapons to easily provide evidence about itself. Iran could have sent money to Houthis, who would then buy any weapons they want from local markets or from African smugglers.”

Given these circumstances, why do several Iranian officials depict Yemen as a new Islamic Republic stronghold and part of the “resistance”?

There could be two explanations.

The first is that Iran has not materially assisted and supported the Houthis, and that Iranian statements of the opposite are simply targeting several audiences domestically and regionally. Iranian officials who do insist on Yemen’s place in the “resistance” depict the rise of revolutionary Shiite Houthis in Yemen as yet another victory for Iran and against the West, and particularly their Sunni rival, Saudi Arabia.

Iran, then, is exaggerating its regional power and military reach to create a mystical stature aimed at solidifying the confidence of its grassroots supporters within and outside its borders — in Iraq, Syria, and Lebanon — while muscle-flexing, and discouraging and pushing its domestic and international opponents onto the defensive.

Many observers maintain that the developments in Yemen are likely to set off alarms in the West and Israel, but most seriously in neighboring Sunni Saudi Arabia, which backed Hadi’s government with billions of dollars and is locked in a proxy cold war with Shiite Iran over regional hegemony.

The presence of an Iran ally at the borders of Saudi Arabia is not only a serious threat militarily but could also destabilize the country from within. The victory of Houthis may inspire the Shiites in Eastern Province, an estimated 10% to 15% of the Saudi population who are already in a tense relationship with the establishment, to rise.

The weakness of this explanation is that while Saudis have poured billions of dollars into supporting the Yemeni establishment, it is hard to believe that Houthis succeeded in organizing such a massive movement and fought a victorious war, as one analysts maintained, just by selling “pomegranates and grapes,” Saada’s major source of income.

The second explanation is that there is truth in the former Yemeni president’s claims and accusations that Iran meddles in Yemen’s affairs as well as Iranians’ statements implying that Ansarollah is a new member of the “axis of resistance.” But if so, why do Zaidi Houthis reject such a connection?

There is a near consensus among Yemen experts that no single tribe or political current can individually govern the country. Although pictures of ayatollahs Khomeini and Khamenei and Hezbollah leader Hassan Nasrallah have been carried by Houthi supporters during demonstrations, in the last year or so, no member of the Houthi political bureau has made any statement praising Iran.

The Houthis’ position might be explained by pointing to their lack of desire to stir up unnecessary resistance from inside and outside of the country against them, and that they do not seek to become the sole holder of power in Yemen. Hussein Al-Bukhaiti explains Houthis' realistic view of Yemen as follows:

“We cannot apply this [Iranian system] in Yemen because the followers of the Shafi [Sunni] doctrine are bigger in number than [us], the Zaidis [Shiite].”

Houthis may want to avoid political and sectarian polarization that seriously threatens the Yemeni nation with fragmentation.