Although they form part of the regional alliance with Iran, Yemen's Houthis and Hezbollah in Lebanon differ in political contexts and behavior. 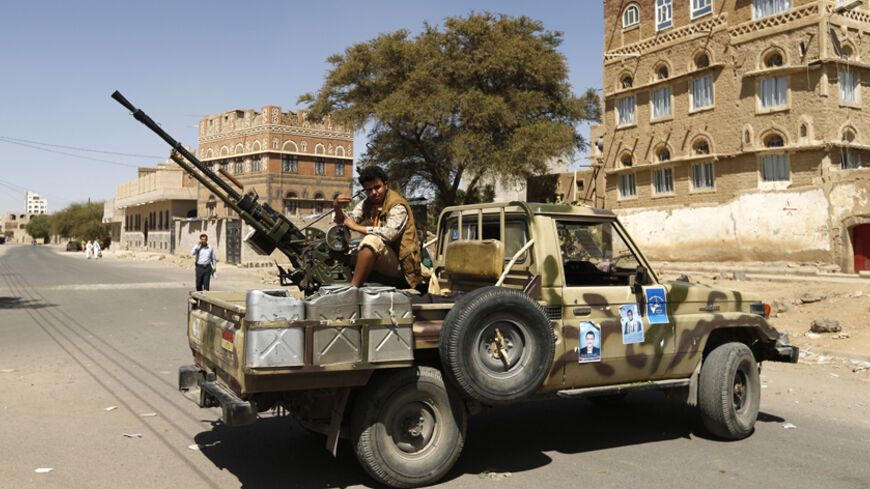 A follower of the Shiite Houthi movement mans a machine gun mounted on a military pickup in Sanaa, Oct. 20, 2014. - REUTERS/Khaled Abdullah

Armed Houthis took over the reins of power in the Yemeni capital, Sanaa, in late September in a way that was reminiscent of Hezbollah's takeover of the Lebanese capital, Beirut, in May 2008. There appears to be an increasingly similar pattern between the actions of Hezbollah and the Houthis. However, despite all the similarities that emerge at first glance, the comparison between the two is still only in form and focuses on ideological rhetoric and some mechanisms used to achieve political goals. In fact, there are deep structural, political and social differences between Hezbollah in Lebanon and the Houthis, or Ansar Allah, in Yemen.

Most important of all, any comparison between the Houthis and Hezbollah cannot ignore the fundamental difference in the political and social structure between Yemen and Lebanon. Sects are the most important and decisive factor among Lebanese society, while in Yemen sectarianism overlaps with regionalism. The Houthi takeover of Sanaa created a national and regional rift, not just a sectarian one. It enshrined the general idea that authority and the conflict for it is still based in the far north, which historically controlled Yemen and whose influence decreased, especially after President Abed Rabbo Mansour Hadi, who hails from the south, took office. In other words, Hezbollah emerged from the sectarian structure that existed in Lebanon, while the Houthis revived a sectarian conflict that had nearly gone extinct in Yemen. In any case, regionalism — not sectarianism — is still the most decisive factor in Yemen until now.

Furthermore, comparing what happened in Sanaa on Sept. 21 with what happened in Beirut in 2008 is a shallow and misleading comparison. This is because the agreement that resulted from the May 2008 events worked to end the political tension that was born in the heat of the moment, increased Hezbollah's responsibilities as a political player among other factions and worked to achieve civil peace. In the end, it led to the election of a president in Lebanon.

In Yemen, however, the Houthis' takeover of Sanaa resulted in their abandonment of the peace agreements with other parties, put a final stop to the political legitimacy of the presidency, degraded the state's prestige and increased the Houthis' political practices as a strong player without being accompanied by a parallel increase in responsibilities. And while the 2008 Doha Agreement achieved a level of social and political peace in Lebanon, the 2013 Peace and National Partnership Agreement in Yemen opened the door to new forms of sectarian and regional violence that were unprecedented in the country. This violence is growing with the Houthis' insistence on taking on the role of the state toward other armed groups, which in turn strengthened the social legitimacy of these groups. The latter included al-Qaeda, as it emerged in the country from the anti-Houthi sectarian circumstances. Thus, sectarian justifications have given rise to wars that were not sectarian in the first place.

The Houthis are trying to take advantage of Hezbollah's experience, and the Houthi-affiliated Al-Maseera Channel broadcasts from Beirut's southern suburbs with technical support from the Lebanese Shiite party. Recently, relations between the two sides have grown deeper. This comes amid repeated accusations from the Yemeni state that Iran is supporting the Houthis, and after the United States put in place new sanctions in August 2013 against some Lebanese who were accused of providing funds to the Houthis in Yemen. The Houthis usually do not deny this strong link with Hezbollah, which is reinforced by common factors between the two sides, such as their presence in the same regional alliance with Iran at the political level. In addition, both groups have armed militias to support their political positions, which they use when necessary. Yet, for the Houthis, the militia is their most prominent — if not exclusive — tool and not the exception, as is the case with Hezbollah.

Upon deeper examination of the reality, we see that the majority of comparisons between the two do not go beyond the superficial comparisons that are common in global and regional media. And this is further confirmed by the coverage of the events in Yemen. From a geostrategic perspective, for example, Hezbollah constitutes a strong ally for Iran and engages in direct conflict with Tehran's traditional enemies such as Saudi Arabia. Meanwhile, the Houthis are more akin to an Iranian tool — not an ally like Hezbollah — and their activity is geographically limited to Yemen, specifically the north of the country. Until now, the group has no role outside of Yemen.

The most prominent difference between the two groups is that Hezbollah is regarded as a political party that is legally recognized in Lebanon. It is not very different from other Lebanese parties, aside from the fact that it has not abandoned its armed militia. Yet, the Houthis in Yemen carry out their activities in the country by virtue of their strength on the ground, and the group is not even registered as a political party. Also, unlike Hezbollah, the Houthis' experience and expertise is limited to war, not politics. The political arena is still an unsafe and newly established space for the Houthis, who emerged from 10 years of war. As for Hezbollah, its experience spans three decades during which war was the exception, not the rule.

On the other hand, the Houthis are still in the phase of expanding and forming their identity. Even their religious ideological identity has not yet been settled, at least for members of the group, who fluctuate between the Zaidi sect — an Islamic sect between Sunnis and Shiites, although historically attributed to the latter — and some Shiite literature that is not accepted by some Zaidis in Yemen. Furthermore, the Houthis do not publicly acknowledge their subordinate relationship with Tehran, even though they have declared their relationship with Iran as a state that represents a model for resistance to the West. The group has shown its admiration for Iran's religious figures such as Supreme Leader Ayatollah Ali Khamenei, welcomes any Iranian achievement and celebrates the same religious holidays as the Shiite sects in Iran, Iraq and Lebanon with a public show of numbers. Yet, these are new phenomena for the Zaidi sect that is affiliated with the Houthis, and their celebration is more of a political act than an ideological one.

On a structural and logistical level, Hezbollah has had a decades-long regional ally in Syria that is geographically close. This helped the party to develop its activity on the military and political levels. Meanwhile, for the Houthis, their geographical neighbor in Saudi Arabia is a traditional and ideological opponent. To some extent, this earned them the favor of Iran. However, Riyadh does not view the Houthis as negatively as it does Hezbollah. Although the United Arab Emirates just followed Saudi Arabia in adding the Houthis to its terror list, that doesn’t necessarily imply that the Gulf Cooperation Council countries are in an open war with the Houthis.

More importantly, despite the Houthis’ extensive human rights violations in Yemen, which is beyond what Hezbollah has ever done in its long life of more than three decades, the Houthis are still seen in a better light regionally compared to their actual behavior on the ground. This is of importance as the United States continues nuclear talks with Iran, and provides both sides with a new card to negotiate with. Depending on how important Yemen is at the moment to the United States, Washington can try to push Iran to influence the Houthis to be more constructive in Yemen.