Relations between Saudi Arabia and the Shiite movements in Yemen, namely the Houthis, have fluctuated over the years but may turn into a Saudi-Iranian rapprochement as a common enemy threatens both sides. 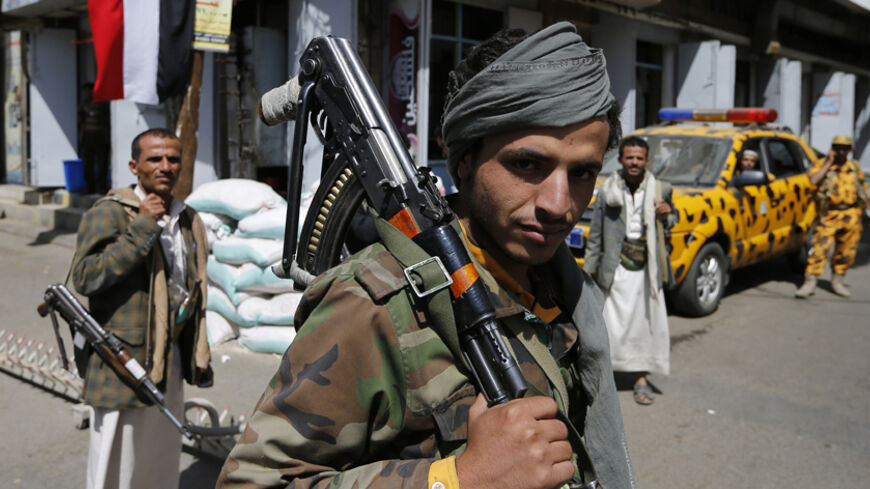 A policeman carries his weapon as he mans a checkpoint in Sanaa, Sept. 25, 2014. - REUTERS/Khaled Abdullah

On Sept. 26, 1962, the Yemeni revolution rose to topple the Shiite Zaydi Imamate and installed a republican system of government in its stead. During the same time this year, Zaydi forces, known as Houthis, entered the Yemeni capital Sanaa, took control of key government institutions and declared the fall of the Sunni, Salafist and Muslim Brotherhood-oriented government.

The irony is that the political struggle that raged back then made Saudi Arabia an ally of the Shiite regime that ruled Yemen at the expense of the predominantly Sunni opposition, which was backed by Egypt. At that time, Saudi Arabia made military and economic efforts to keep the Yemeni Shiite monarchy in place, but it was finally ousted by supporters of the republican regime.

Riyadh later sought to safeguard and expand its influence in Yemen by exploiting the religious card through the promotion and backing of the Wahhabi ideology in Yemeni society. In that context, many religious, social and political organizations with Salafist aspirations were established with Saudi support. Most prominent among them was the Yemeni Congregation for Reform, which was formed in 1990 by a variety of Salafist, Wahhabi and Brotherhood factions. The party brought together tribal and community leaders within an Islamist framework striving to install an Islamist rule in Yemen that espouses Salafist standards common to the Wahhabi and Brotherhood ideologies. It also received enormous Saudi financial backing and maintained good relations with the international organization of the Muslim Brotherhood.

With the rise of the Houthi movement during the early 1990s, Saudi Arabia stood with the factions opposing this movement. These factions were composed of the President Ali Abdullah Saleh-led Yemeni government and the Congregation for Reform, which sometimes allied itself with that government and other times only backed it. Saudi Arabia intervened on more than one occasion, both militarily and economically, against the Houthis and participated in repressing them in their northern bastions.

The Houthis’ discontent emanated from a feeling of social discrimination and concern over losing their Shiite Zaydi identity in Yemen. They have anti-Israeli and anti-US tendencies, which alienated them from so-called moderate Arab regimes, and brought them closer to the axis of resistance comprised of Iran and Lebanon’s Hezbollah.

Thus, the Houthis formed good relations with Iran and Hezbollah, as a result of their common sectarian affinities and political vision toward the overall situation in the region. While there are no documents proving the Saudi and Yemeni accusations that Houthis are supported militarily by Iran and Hezbollah, cultural relations and sectarian exchanges continued unabated between them, from the 1990s up to this day. There was a wide-ranging cultural exchange between the two sides, as Yemeni students went to Qom in Iran to study Shiite theology, and Qom-based clerics came to Shiite areas in Yemen to conduct religious activities there.

This development was cause for concern to the Saudis in particular, as well as to Yemeni Salafist factions and Arab regimes that stood against the spread of Iranian influence in the Arab world. The recent sectarian strife exacerbated the Yemeni crisis and imbued it with a distinctly sectarian character, despite its origins being political and social.

Riyadh’s position can be best explained by the recent Saudi-Iranian rapprochement, which previously began manifesting itself upon the formation of the new Iraqi government. Saudi Arabia adopted a strong stance against the Islamic State group, while both the Saudi and Iranian sides issued a series of statements calling for the settlement of past disputes and the opening of a new chapter in the relationship between the two countries. In addition, Tehran has been increasingly calling for the need to seriously cooperate with Saudi Arabia and open the door for dialogue with Riyadh to reach solutions and settlements for the ongoing crises in the region.

This stance was helped along by the wise statements of the Houthis’ leader, who avoided any mention of Shiism, which would have led to tension with Saudi Arabia. Instead, the Houthis brilliantly focused on denouncing the danger posed by al-Qaeda to Yemen and the region, while extolling the potential positive influence of the Houthis on stability in the country and the region. This has led to US and Saudi acceptance of the new Yemeni status quo, especially after the strategic Yemeni Bab al-Mandeb strait gave the country particular importance among regional and international powers. In addition, as far as Saudi Arabia was concerned, Yemen offered a safe haven for al-Qaeda in the Arab Peninsula, where terrorists could train and prepare for acts against the Saudi homeland. Accordingly, the emergence of political movements opposed to al-Qaeda and jihadist Salafism in Yemen was a Saudi national interest as well.

In conclusion, conditions in the region today, particularly the appearance of a common enemy, offer a Saudi-Iranian rapprochement a great opportunity to evolve. Such a development would also represent a chance for the easing of sectarian tensions that have been boiling over for years in the region. But, one has to wonder, how far are the two parties willing to go to form a balanced partnership in the region, away from the influence of sectarian ideologies that could lead to the conflict erupting anew at the first opportunity?