Saudi Arabia and Iran appear to see the Houthis' assault against Sanaa to both their advantages in the fight against extremists in the region and resolving other issues. 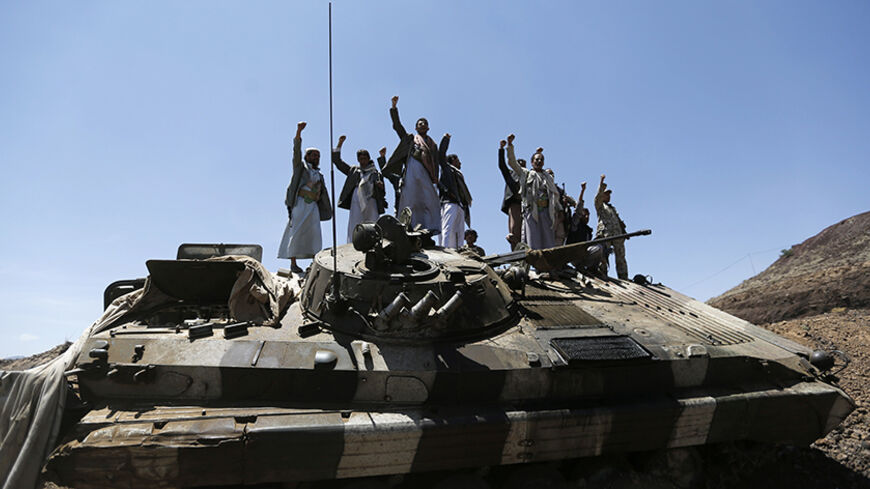 Shiite Houthi rebels gesture as they stand atop an army vehicle they took from the compound of the army's 1st Armored Division in Sanaa, Sept. 22, 2014. - REUTERS/Khaled Abdullah

The dramatic rebel assault on Sanaa and subsequent truce brought out smiles in Tehran, tears in Doha, silence from Riyadh and a wait-and-see attitude from Washington. The pieces on the Middle East chessboard continue to move. For three years, Iran’s rook and bishop in Syria and Iraq had been seriously threatened, when suddenly, in Yemen, a king was checkmated, with the Saudi-led bloc and the Turkish-Qatari alliance losing a stronghold unlike any other in the region.

The Bab al-Mandab, the strait on the west coast of Yemen, serves as the gateway to the Red Sea and the Mediterranean. Iran’s Shiite allies in Yemen, the Ansarullah, or Houthis, took control of Sanaa and handed the key to Tehran, which, on the other side of the peninsula, already controls the Strait of Hormuz, the gateway to the Persian Gulf. The Houthis' invaluable gift makes Iran the gatekeeper of the Middle East’s strategic waterways.

Despite the importance of controlling the Bab al-Mandab, it cannot be compared to Iran, through its Yemeni proxy, playing almost unchallenged in Saudi Arabia’s backyard. Mohammed Marandi, head of Tehran University’s world studies faculty, told Al-Monitor, “Years ago, Saudi Arabia failed to combat hundreds of Houthi militants. What is it going to do today, after they have become thousands?” He further stated, “There’s no doubt the situation isn’t that good security wise, but Iran’s allies in Yemen are the majority. The southerners and the Houthis are a large segment of Yemeni society, while the others sides are not unified — the al-Islah party, which is affiliated with the Muslim Brotherhood backed by Qatar, and the president [Abed Rabbo Mansour Hadi], who is Riyadh’s ally, and let’s not forget the extremists, al-Qaeda and supporters of the Islamic State [IS].”

Yet, in Saudi Arabia there are questions surrounding the recent events. With the government issuing a statement welcoming the agreement between the Yemeni government and the Houthis, many were wondering what had taken place. Abdullah Alshammri, a former Saudi diplomat and a columnist, told Al-Monitor, “What happened in Yemen last week is strange.” He said, “It reflects one of two things: either the complete absence of Saudi diplomacy from events in Saudi Arabia’s southern backyard or Saudi Arabia is happy with what’s going on, though this is hard to concede.”

That said, there are indeed reasons to believe that what is hard to concede might in fact be the reality that Saudi Arabia, for some reason, is not feeling threatened by what has transpired. The meeting that brought together Saudi Foreign Minister Saud al-Faisal and his Iranian counterpart, Mohammad Javad Zarif, in New York on Sept. 21, the day of the Yemeni agreement, was a clear indication that the situation might not be as tense as many thought it would be. Tehran and Riyadh, weighing their options for resolving the various problems they face in the region, seem to have come to the same conclusion: any solution requires them to stand together on the same front. There is no other option if they want to survive the IS tidal wave. Events in Yemen could help strengthen their position.

“The Saudi decision to hit IS isn’t an easy one,” said Marandi. “Wahhabis are hitting Wahhabis, annoying Wahhabis, and that will never be a popular decision in a Wahhabi state.” According to Marandi, “Iran is ready to go for a big deal with the Saudis in the region and Saudi Arabia should take it seriously. Iran is ready to bridge gaps between Iraq and Saudi Arabia, Syria and Saudi Arabia. Even in Yemen, Iran can help a lot. The Houthis can limit the threat extremists [such as, al-Qaeda] pose on the region from Yemeni territory.”

Iran and Saudi Arabia have been fighting a war by proxy for years now, in Bahrain, Iraq, Lebanon, Syria and Yemen. It is basically a regional war involving security, economics, politics, rival media and sometimes even sports. “There have been several attempts to improve bilateral relations between Saudi Arabia and Iran,” explained former Saudi diplomat Abdullah Alshammri. “Iran has been trying, and any improvement will be in the interest of Iran. The reason is that Iran has a clear vision and strategy in the region. They play politics beyond temporary reactions.”

A Saudi-Iranian deal in the region will of course require concessions on both sides. Now that Iraq and Yemen are back on the right track, thanks to recent agreements, Bahrain, Lebanon and then Syria are up next. According to an official Iranian source who spoke to Al-Monitor on condition of anonymity, something positive might soon be coming out of Bahrain.

“There are serious negotiations between the royal family and the opposition to reach an agreement that might see the opposition running in parliamentary elections,” the source said. He refrained from providing additional information, but a Bahraini opposition source revealed that what was being discussed could end the lingering crisis there if certain demands are met. “On the table, we are discussing the following: reforming the electoral constituencies, reshuffling the Cabinet, releasing political prisoners except for those who called for toppling the regime, and the opposition participating in the forthcoming elections.” Such an agreement would put an end to the uprising that began in February 2011 as part of the Arab Spring. It has received the least attention of all the rebellions.

A May Al-Monitor article cited a possible Iranian-Saudi rapprochement stemming from the efforts of regional states and Akbar Hashemi Rafsanjani, the Iranian strongman and former president. According to the piece, a road map drawn by Rafsanjani prioritized Bahrain ahead of Lebanon. So, after the Bahrainis put pen to paper, the Lebanese might have to start cleaning and preparing the presidential palace, vacant five months, to welcome the new occupant.