The new Saudi Arabian king's first year and a half has been a time of aggressive expansion of power and territory — at tremendous cost and risk. 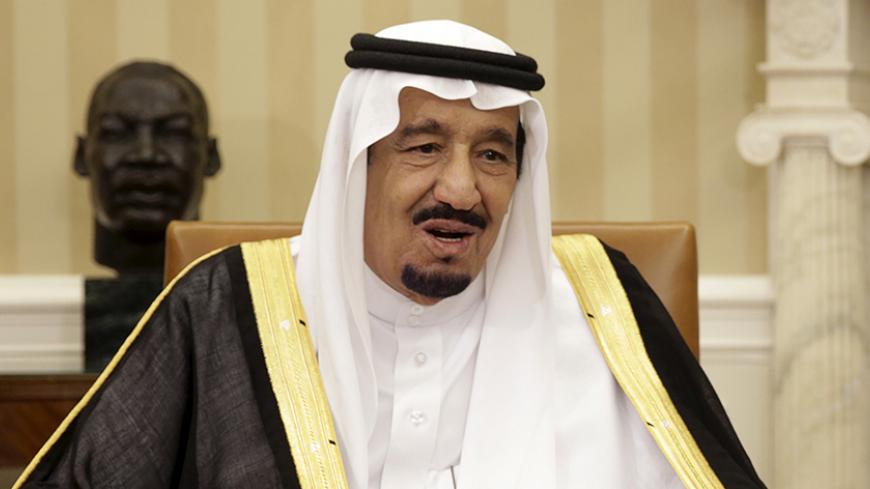 King Salman bin Abdul-Aziz Al Saud's 18 months on the Saudi throne have been marked by an unprecedentedly energetic and dynamic foreign policy expanding Saudi influence. Riyadh has been far more willing to take risks in national security choices than in recent decades. In the process, the Saudis have acquired some strategic territory.

The king's decision to restore Saudi sovereignty over two uninhabited islands, Tiran and Sanafir, in the Gulf of Aqaba and take possession of them from Egypt is a prime example of his aggressiveness. Saudi kings since Abdul-Aziz ibn Saud have left the two islands under Egyptian control to avoid getting involved in the sensitive issue of passage through the Straits of Tiran. Now Riyadh plans to build a bridge across the straits to provide a land link from the kingdom to North Africa. The islands will be inhabited at least by customs and toll collectors.

The annexation provoked controversy in Cairo and undermined Salman's client, President Abdel Fattah al-Sisi. Egyptians complained Sisi was giving away part of their country. Many saw it as a naked payoff for the billions in aid and investment Saudi Arabia has made in Egypt since they helped orchestrate Sisi's coup in 2013. It makes Saudi Arabia the dominant power in controlling access to the Gulf of Aqaba and the ports of Eilat in Israel and Aqaba in Jordan. Riyadh has committed to ensuring free access.

At the other end of the Red Sea, the king's war with the Houthi rebels in Yemen has given Saudi Arabia de facto control of the Yemeni side of the crucial Bab al-Mandab Strait between Asia and Africa. The Saudis took control of the port of Aden on the entrance to the Red Sea a year ago and the strategic island of Perim in the Bab al-Mandab last October. Their Yemeni allies control Socotra Island in the Gulf of Aden as well. This spring, Saudi and Emirati troops took control of the capital of the Hadhramaut region of southeast Yemen, Mukkala, away from al-Qaeda in the Arabian Peninsula. Mukkala is the fifth-largest city in Yemen and provides the Saudis with land access across the Empty Quarter Desert to the Indian Ocean.

Yemen is now de facto partitioned by the war. The Saudis have backed the shaky UN-brokered cease-fire and the political negotiations in Kuwait. During Deputy Crown Prince Mohammed bin Salman's visit to Washington last week, he promised President Barack Obama the kingdom is committed to a "political settlement of the conflict." While the parties to the talks in Kuwait say they want a united Yemen, many southerners would prefer a return to southern independence. Saudi Arabia backed a southern secessionist rebellion in 1994. In the Middle East, "temporary" partitions have a tendency to last.

In the Persian Gulf, Salman has sharply escalated Saudi Arabia's rivalry with Iran. The war in Yemen is justified as a conflict to prevent Iran from developing a proxy in Arabia. Diplomatic relations with Tehran were severed in January, and Iranians will not be participating in the hajj this year. While Tehran has hinted at an openness to cooling tensions, there is no sign of any such interest in Riyadh. The influential Wahhabi clerical establishment has strongly endorsed the tough line with Shiite Iran.

In Syria, the Saudis hope that defeating the government of President Bashar al-Assad will lead to the unraveling of Hezbollah and Iran's position in the Levant. Last summer, the Saudi intelligence service nabbed Ahmed Ibrahim al-Mughassil, chief of Saudi Hezbollah, after he got off a flight from Tehran to Beirut and spirited him away to the kingdom. Mughassil was the mastermind of the 1996 truck bombing of the Khobar Towers that killed 19 Americans. He was also involved in several attacks on Saudi diplomats in the 1980s. His rendition is the boldest Saudi intelligence coup ever.

The favorite son of the king, Prince Mohammed bin Salman, 30, has been at the center of all the action. As defense minister he has also presided over the creation of the new Islamic military alliance announced last winter by the king. The alliance is clearly aimed at isolating Iran and Iraq, though officially it is a counterterrorism pact. Its 30 or so members have established a secretariat in Riyadh.

Crown Prince Mohammad bin Nayef keeps a lower profile. But his hand has been critical in the Mughassil caper, breaking ties with Iran, the tough hajj policy and the taking of Mukkala. He also leads the battle against the Islamic State terror challenge at home.

This aggressive foreign policy is expensive. Billions have gone to prop up Sisi and others. The war in Yemen is costing more. The king and his two deputies clearly feel the price is worth it. Whether by accident, design or some combination of the two, Salman has acquired some of the most strategically valuable terrain in the Middle East.