Saudi King Salman bin Abdul-Aziz Al Saud has three options to choose from on Yemen, none of them good. 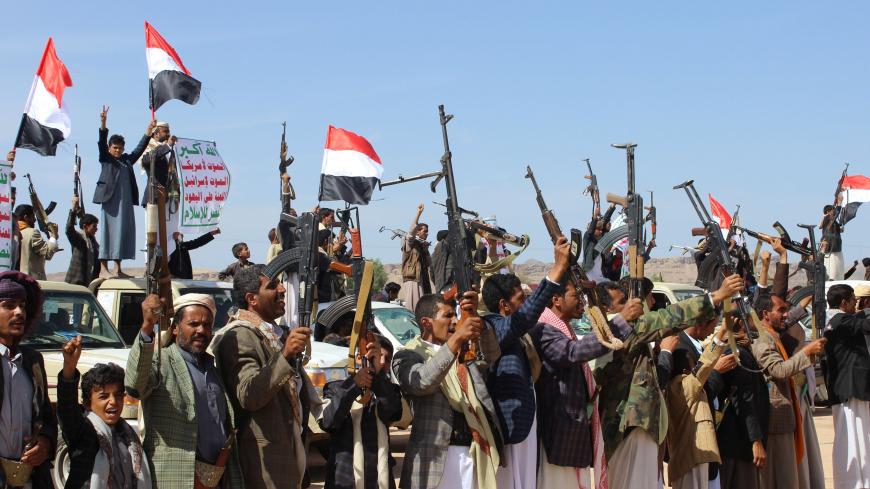 Tribesmen hold up their weapons during a gathering to show support to the Houthi movement in the northern city of Saada, Yemen, Aug. 2, 2016. - REUTERS/Naif Rahma

Saudi Arabia is facing a critical decision point in its war in Yemen. The political process to resolve the crisis between Yemen's warring parties is failing. King Salman bin Adbul-Aziz Al Saud will have to decide whether to escalate the war against the rebel alliance or settle for de facto partition of the country. He may choose to dither.

The United Nations-mediated peace talks in Kuwait have been suspended for at least the next month if not longer. While the UN has been careful to leave the door open to the talks' resumption, there is little likelihood of a political breakthrough in the process given the terms of reference for the process created by UN Security Council Resolution 2216. The latter calls for a restoration of the Abed Rabbo Mansour Hadi government to power in Sanaa, a demand the alliance of Zaydi Houthi Shiite rebels and the followers of former President Ali Abdullah Saleh refuse to accept.

The Houthis and Saleh formed a council last month to govern the capital and most of north Yemen. This effectively partitions the country between the Shiite-dominated north and east and the Sunni-dominated south and west. It's a messy partition with many flashpoints, such as the city of Taiz, where fighting has never halted despite the reduction in violence this spring that set up the Kuwait dialogue. The rebel alliance has asked the UN to form a transitional government to replace Hadi, but Hadi refused to step aside.

The Saudis have reluctantly backed Hadi and have been unwilling to use their leverage with his regime to move him out. They have enormous leverage, of course, since they and their coalition allies provide Hadi with the funds and arms that keeps his weak government in power in Aden. The Saudis backed Hadi to replace Saleh after the Arab Spring; he is their protege and abandoning him would be embarrassing.

The Saudi-led coalition now says it will "revive" its military operation called Restoring Hope to deal with continued violations of the weak truce that accompanied the UN talks. Saudi airstrikes against the rebels have already intensified.

But it is unclear whether Riyadh wants to try to take Sanaa and other northern cities from the rebels. One Saudi commentator recently wrote that such an offensive would turn the capital into a "cemetery" and fuel Yemeni hatred of the kingdom for generations to come. The coalition forces are close to the capital city's eastern approaches but a house-to-house battle would be bloody and expensive while still leaving the Houthis in control of their traditional stronghold in northern Yemen along the Saudi border. The Houthis continue to keep the border region under fire, causing the Saudi border towns to be at grave risk. The Houthis can escalate the conflict along the border if the Saudis and their allies step up offensives against Sanaa.

The war is expensive for the kingdom. Last year, the kingdom had the third-largest defense budget in the world. Only the United States and China spent more on their militaries. Not all of Riyadh's expenses go to the Yemen adventure, of course, but a considerable amount does. The United States and the United Kingdom have been selling Saudi Arabia huge amounts of munitions and other supplies to keep the war effort going. Saudi plans to produce half their armaments at home under the Saudi Vision 2030 master plan are hopelessly unrealistic. A country of 20 million people can not sustain defense budgets like this indefinitely, especially with oil prices falling again.

Last week, the top Wahhabi cleric in the kingdom, Sheikh Abdul-Aziz Al Sheikh, who is the grand mufti and president of the Council of Senior Scholars, called on private firms, banks and businesses to donate money to help support the families of soldiers killed in the war and called on the country's universities to give free tuition to the children of those who were killed. He also appealed for donations to help border towns under attack. This appeal underscores the expense of the war and the government's challenge in paying for what is an open-ended quagmire.

Some commentators in the kingdom are suggesting a fallback option for the war. Riyadh would accept a partition of the country, leaving the Houthis in charge of the north indefinitely while a pro-Saudi southern state gets international legitimacy. This south Yemen state would become a member of the Gulf Cooperation Council. Saudi Arabia would have de facto control of the crucial Bab al-Mandab Strait in such a scenario. It would be a long-term means to contain the Houthi challenge.

The king is on an extended vacation in Tangiers, Morocco. At the last minute he decided not to attend the Arab summit in Moroccan neighbor Mauritania last month, reportedly for health reasons. In Salman's absence, Crown Prince Mohammed bin Nayef is running day-to-day affairs.

The easiest choice for the kingdom is to muddle along and make no decision. The monarchy would refuse any transitional government and emphasize that the war has prevented an Iranian takeover of Yemen. Playing the Iran card keeps up public support for the war and rallies the bulk of the Gulf Cooperation Council behind it. It greatly exaggerates the Iranians' role in Yemen, but that is not the question for the king. He can use an Iranian threat indefinitely, knowing Tehran will engage in enough mischief to justify Saudi and Gulf fears.

The architect of the Saudi war is the king's favorite son, Defense Minister Mohammed bin Salman. The son has notably reduced his profile in the war effort since it bogged down a year ago. In the first months of what was then called Operation Decisive Storm, Mohammed was always in the news leading the campaign. Whether the 30-year-old deputy crown prince has second thoughts about the war or a plan to resolve it is unknown.

Washington has been mostly an observer to the Yemeni crisis and US Secretary of State John Kerry has not made it a priority for his diplomacy. Behind the scenes, American diplomats have tried to help the UN process, but with no success. Yemen is simply not a priority. Meanwhile, half the Yemeni people are undernourished. Tens of thousands of children are at risk. The richest countries in the Arab world are bombing the poorest country and the world is preoccupied with other affairs.