There are now two rebellions against the internationally recognized government of Yemen: one by the Houthis in the north and a second by secessionists in the south who now have control of Aden. 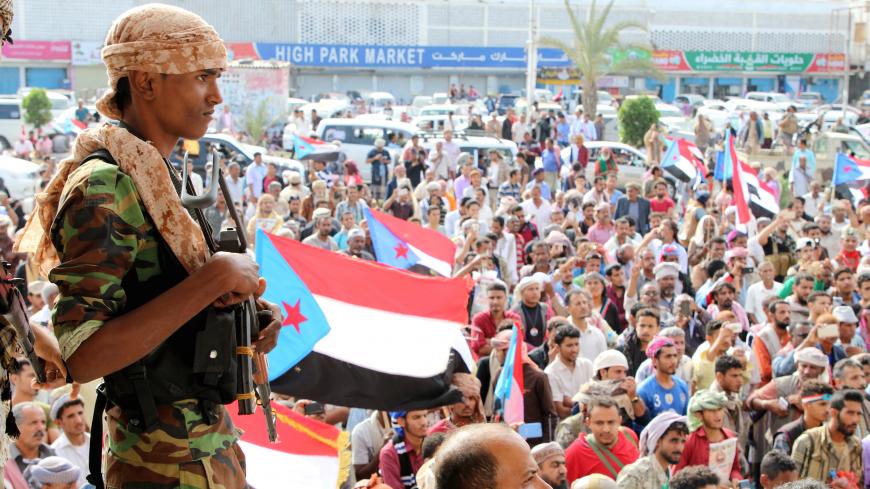 Supporters of the southern Yemeni separatists demonstrate against the government in Aden, Yemen, Jan. 28, 2018. - REUTERS/Fawaz Salman

Like a phoenix rising from its own ashes, the state of South Yemen appears to be returning to the Arab world. Southern secessionists have taken control of the south’s major port city and former capital, Aden, and seem posed to restore the southern republic that went out of business in 1990 with the collapse of its mentor, the Soviet Union. Today it has found a new mentor in the United Arab Emirates (UAE).

There are now two rebellions against the internationally recognized government of Yemen led by President Abed Rabbo Mansour Hadi, one by the Houthis in the north and a second in the south. Washington needs to develop a new strategy for the civil war in Yemen and the humanitarian disaster there that threatens millions with famine and disease.

This week, southern secessionists led by the Southern Transitional Council took power in Aden after violent street battles with forces loyal to Hadi. Casualties are high. Hadi’s prime minister and a few followers are holding out in the presidential palace, surrounded by the rebels.

Tensions between the Hadi loyalists and southern secessionists have been building for three years, since Hadi was evicted from Sanaa and northern Yemen by the Houthis and established his alternative capital in Aden with the armed assistance of Saudi Arabia, the UAE and the other members of the pro-Hadi coalition, which also has American backing. Hadi is a southerner but has never been popular in the south. He has spent almost all of the last three years in Riyadh since Aden became too dangerous for him. The Southern Transitional Council formed last year and demanded Hadi transfer authority to it in January.

According to firsthand accounts of the fighting, which Hadi calls a coup, the rebels got air support from the UAE. The Emiratis have become progressively disillusioned with Hadi’s weak leadership and flirtation with the Muslim Brotherhood. They have built up the strength of their southern secessionist allies in the city for months. The Saudis are also frustrated with Hadi but remain his critical host and backer.

South Yemen was a British colony until 1968. The British took Aden in the 19th century as a critical port on the route from the United Kingdom to their empire in India. At one time it was the second-busiest port in the world after New York. The British gradually incorporated the interior areas around Aden as protectorates run by local sheikhs and created a loose federal government before Yemen's independence.

That independence came after a violent guerrilla war against the British and their local allies led by a Marxist pro-Soviet movement that aspired to take over the entire Arabian Peninsula as a communist state. The Soviet Red Navy replaced the Royal Navy in Aden. The People’s Democratic Republic of Yemen covertly supported Marxists in North Yemen, Oman and Saudi Arabia but remained the only communist country in the Arab world. The Soviet Union subsidized its economy until the end of the Cold War. When the Soviet Union collapsed, the People’s Democratic Republic of Yemen was bankrupt and merged with the north under northern strongman Ali Abdullah Saleh, the hero of Yemeni unity.

Ironically, the Saudis backed an attempt by southern secessionists linked to the old People’s Democratic Republic of Yemen in 1994 to break that unity and restore independence to the south. Saleh had tilted toward Saddam Hussein and Iraq in the 1990-91 Kuwait crisis. Saudi King Fahd was eager to punish Saleh by backing the southerners. Saleh won the ensuing civil war, much to Riyadh’s humiliation. President Bill Clinton had wisely kept the United States distant from the Saudi conspiracy to redivide the country.

The Southern Transitional Council today is led by the former governor of Aden, Aidarus al-Zubaidi, who has been a militia commander and longtime southern nationalist. In an interview this week he said that the south has a right to its own state but that he also supports the coalition’s Operation Decisive Storm, the original name for the Saudi intervention in Yemen three years ago. It is unclear how far he plans to go in formally creating an independent nation. A de facto independence may be the interim step most acceptable to Riyadh and Abu Dhabi. Perhaps the myth of Hadi’s continued rule is still marginally useful.

But the flag of the People’s Democratic Republic of Yemen is now flying all over Aden and the inhabitants are reportedly glad to see it back. It has a distinctive red star in it, but that is probably the only Marxist remnant. The secessionists long ago traded communism for nationalism. They have long resented northern dominance (80% of Yemenis live in the north, most under Houthi control). The southern rebels are Sunni Muslims who also resent the Houthis who are Zaydi Shiites; the secessionists are also opposed to Iran and its role in the war.

It’s also unclear how much sway the secessionists have outside Aden. Much of the south is under the control of local tribal militias bankrolled by either the Emirates or the Saudis or both. Al-Qaeda in the Arabian Peninsula also has significant pockets of control in the south. Loyalties are flexible and ever changing. Law and order is flimsy at best. Al-Qaeda is a big winner from the chaos and confusion of the Aden battles.

The defeat of Hadi in Aden is a major milestone in the civil war. He has now lost two capitals and it’s clear that he is not going to be restored as Yemen’s ruler. It’s a dangerous fantasy to argue that the solution to the humanitarian catastrophe in Yemen caused by the war and the Saudi blockade can be achieved by the restoration of the Hadi government. Saudi policy is bankrupt. It failed to take advantage of Saleh’s defection from the Houthis last year. He’s dead and they have now been outmaneuvered in Aden.

The extent of the differences between Riyadh and Abu Dhabi is another uncertainty. Always close allies, they have drawn very close since King Salman bin Abdul-Aziz Al Saud ascended the throne. The two crown princes, Mohammed bin Salman and Mohammed bin Zayed, have become especially close-knit.

The Donald Trump administration has taken useful steps this winter to address the worst excesses of the Saudi blockade, but the measures fall far short of the thorough policy assessment the war now requires. The basis of current US policy, United Nations Security Council Resolution 2216 adopted in 2015, is out of date and one-sided. The UN mediation efforts have gotten far too little muscle from the council members.