Yemen's Saleh proves to be a survivor

Former Yemeni President Ali Abdullah Saleh has been central to the Houthis' success in Yemen and may determine the country's future. 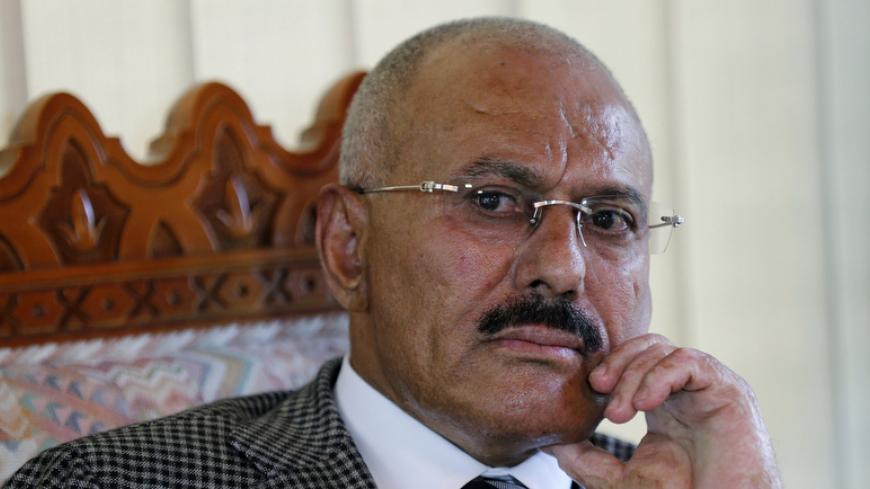 In the dangerous game of Yemeni politics, Field Marshal Ali Abdullah Saleh is the ultimate survivor. The Saudi-led air campaign is the fourth time the Saudis have tried to engineer his removal from Yemeni politics. Saleh has survived isolation, sanctions, civil war and assassins. Now he has built an alliance with his former foes, the Houthis, to oust his former deputy from the country.

Saleh, 73, is a Zaydi Shiite who joined the Yemeni army as a corporal in 1958. He attended the Yemeni military college and fought alongside the Egyptians against the Saudi-backed Zaydi royalists in the 1960s. He became president of North Yemen in 1978 after his predecessor died in an assassination arranged by the then-leader of South Yemen. The South Yemeni communist leader had sent an emissary to visit his northern counterpart with a briefcase allegedly containing a secret letter. Instead, it had a bomb inside that exploded, killing the messenger and Saleh's predecessor.

It was widely assumed that Saleh would not last six months. Instead, Saleh survived several coup attempts before securing the unification of North and South Yemen in 1990, when the Soviet Union could no longer afford to keep the communists in power in Aden. Saleh gained much popular support for the unification.

Later that year, Saleh sided with Saddam Hussein and Iraq when it invaded Kuwait. Yemen was Saddam's only supporter in the UN Security Council. The Saudis believed he had a secret deal with Saddam to restore Yemeni rule over provinces lost by Yemen to the kingdom in a 1934 war between the two countries. Working closely with President George H.W. Bush, Saudi Arabia's King Fahd sought to isolate Saleh to punish him for his pro-Iraqi sentiments.

Riyadh evicted almost a million Yemeni guest workers and their families from Saudi Arabia in retaliation for Yemen's tilt toward Baghdad. The Saudis hoped this would precipitate a coup against Saleh. He survived.

In 1994, the Saudis backed an effort by the former Marxists in south Yemen to regain independence. The Saudis sent weapons and money to the southern separatists. Saleh crushed the secessionists in a brief bloody civil war and regained control of Aden. Riyadh was thwarted again.

After al-Qaeda attacked the destroyer USS Cole in Aden's harbor in 2000, Saleh claimed that a US plan to seize the city had been thwarted. Then he promised to defeat al-Qaeda. President George W. Bush hailed him as a partner in the war on terrorism.

After the Arab Spring came to Yemen in early 2011, Saleh faced popular demands to give up the presidency. He was the target of an assassination attempt in a mosque in June 2011 in which he was badly wounded. After recuperation in hospitals in Saudi Arabia and the United States, Saleh reluctantly turned over power to Vice President Abed Rabbo Mansour Hadi in a Saudi-arranged political agreement in 2012 that granted Saleh lifetime immunity from prosecution.

Behind the scenes, Saleh made a deal with the Zaydi Houthi movement to work against Hadi and the Saudis. Saleh had fought the Houthis for years before 2009 and had killed their first leader, but the Houthis welcomed his support, especially as Saleh still has considerable backing in the former Republican Guard and other key army units and in the air force.

Saleh is also grooming his son to be Yemen's next leader. Ahmed Ali, 42, is a key player in turning the military against Hadi. Hadi made him ambassador to the United Arab Emirates to get him out of the country, but it didn't work. Many Yemenis believe the two Salehs have been more important in the Houthis' successes than the Iranians. Without Saleh, it is unlikely the Houthis could have taken control of the capital.

The United Nations imposed sanctions on Saleh, including a travel ban and assets freeze for working with the Houthis against Hadi in November 2014. The Saudis were instrumental in getting the sanctions passed. The UN experts report also accused Saleh of working with al-Qaeda in the Arabian Peninsula to arrange assassinations of Hadi supporters.

Saleh is Saudi Arabia's bete noire. The royal family has wanted him gone for 2½ decades. His home village and stronghold was been bombed this week by the Royal Saudi Air Force. Saleh famously said that ruling fractious Yemen is like dancing on the heads of snakes. He is the consummate snake dancer.

Saleh is still dancing. On the night of March 28, in a televised address on Houthi-controlled media, he appealed for an end to the "barbaric" air attacks and for there to be a cease-fire and elections. He promised that neither he nor his son would be a candidate for president but also ruled out Hadi's return. By coming out publicly, Saleh seems to be trying to play the role of senior statesman. There are rumors that Ahmed Ali Saleh has been in Riyadh trying to broker a deal. Saleh bears huge responsibility for the disaster his country and its neighbors now confront, a failing state turning into a quagmire. But the survivor still wants to play.