The Yemeni people are paying a frightful toll as Saudi Arabia and its allies escalate the war in the country. 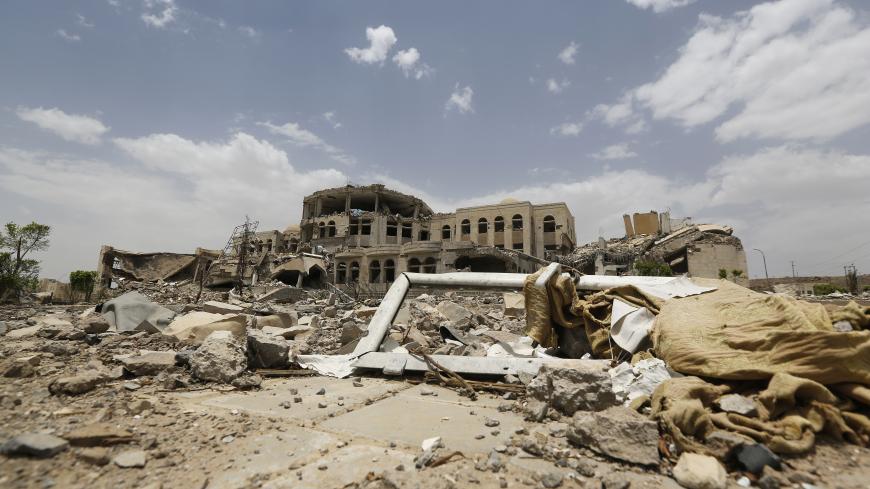 Part of a window frame is seen in front of a government compound destroyed by recent Saudi-led airstrikes, in Yemen's northwestern city of Amran, July 27, 2015. - REUTERS/Khaled Abdullah

Saudi Arabia and its Gulf allies are escalating the war in Yemen. The Houthi rebels and their allies show no sign of bending to the will of Saudi Arabia's King Salman bin Abdul-Aziz Al Saud after more than four months of war. The grim struggle in Yemen goes on with a frightful toll for the Yemeni people.

The Saudis and the United Arab Emirates (UAE) are pouring arms into Aden, Yemen's second-largest city, and expanding their foothold there to the north. They seized a large Soviet-built air base north of Aden at Al-Anad. The air base is on the main road to Taiz, the next Saudi military objective. In Taiz, forces loyal to President Abed Rabbo Mansour Hadi claim to control much of the city, Yemen's third-largest and the historic second capital of North Yemen.

The UAE has deployed over 1,500 of its own troops to the Aden front, the first time the coalition has placed its own ground forces into the battle. The Saudis have trained Hadi loyalists and equipped them with tanks and other armored vehicles to open another front in Marib governorate in the northwest of the country.

The Saudi gains so far have been outside the Zaydi Shiite heartland of the Houthi rebels. Sanaa remains firmly in the rebels' control. The leader of the Zaydi Houthi rebels, Abdul-Malik al-Houthi, gave a speech this week to his followers, promising, "We are in a great battle in which we must use all our efforts." He acknowledged the Saudis and their allies had retaken the southern port of Aden but said, "The enemy threw all their weight to gain a limited achievement." Houthi accused the Saudis and their ally, Hadi, of working with both Israel and the Islamic State (IS) to take Aden. He called for an internal Yemeni political solution to the war.

Saleh went on to blast the new Saudi leadership for abandoning the wise policies of the late King Abdullah, who died in January. The new leadership "is no longer a sisterly or friendly country but rather an aggressor against our Yemeni people."

Meanwhile, the Yemeni people are heading toward a humanitarian disaster as the war continues. Some aid is now moving into Aden, but the rest of the country is desperately short of water, food and medical supplies. Both sides have sabotaged efforts to arrange short cease-fires to allow temporary relief; 20 million people are at risk.

Even as the Yemen war intensifies, IS is stepping up its efforts to destabilize the kingdom. After a series of attacks on Shiite mosques in Saudi Arabia and Kuwait, the Saudis arrested over 400 suspects linked to the terror group. Saudi officials later said more than three dozen Saudis had died and over a hundred were wounded in clashes with the suspects, suggesting some intense fire fights.

The IS challenge is not yet as dangerous as the al-Qaeda threat inside Saudi Arabia a decade ago, but it appears to be getting worse, not better. The IS infrastructure in the kingdom calls itself the Nejd Vilayet of the Caliphate. It claimed credit for a suicide bombing in Abha near the Yemeni border this week that killed a dozen members of an elite Interior Ministry SWAT team.

But the kingdom's top priority is Yemen. The king has embarked on the most ambitious foreign policy project in the kingdom's modern history, and he and his son need a victory. Inside the kingdom, growing doubts about the Yemen war are circulating quietly. The king's ambitious son, Deputy Crown Prince and Defense Minister Mohammed bin Salman, is derisively called the "little general" behind his back for his role in starting the war.

The emphasis on Yemen explains the muted Saudi reaction to the Iran nuclear deal. Riyadh fears the deal will strengthen Iran and end sanctions permanently. But the Saudis cannot fight the deal when they need the support of its key arms suppliers — especially the United States and the United Kingdom — to fight in Yemen. The Saudi media has stressed that Washington has given assurances of support in fighting Iran's allies, including the Houthis, and new arms sales. Quiet acceptance of the nuclear deal and sanctions relief for Iran is the price Riyadh has to pay to win in Yemen.

Prince Salman visited Egypt and Jordan this month to rally support for the war. He remains the public face of the conflict at home. The media trumpets the victories in Aden and Taiz as proof his strategy is working. The king is in Morocco after extensive medical tests in France.

A great humanitarian tragedy is unfolding in the Arabian Peninsula. The international community appears powerless to help the Yemeni people or, even worse, indifferent to their fate. The richest countries in the Arab world are waging war and a blockade against the poorest nation in Arabia with no end in sight. For its part, the United States has committed to accelerating arms deliveries to the kingdom and the Gulf states, which helps them continue the air and naval blockade. Without the Americans and British regarding supply of munitions, logistical assistance, diplomatic protection in the UN and other support, the Saudis would be much constrained in the war. The world is failing Yemen.