The withdrawal of the remaining US military personnel from Yemen only adds to Riyadh's desperation, with Riyadh worried that Washington's priority is a nuclear deal with Tehran, not stopping Iranian subversion in the Arab world. 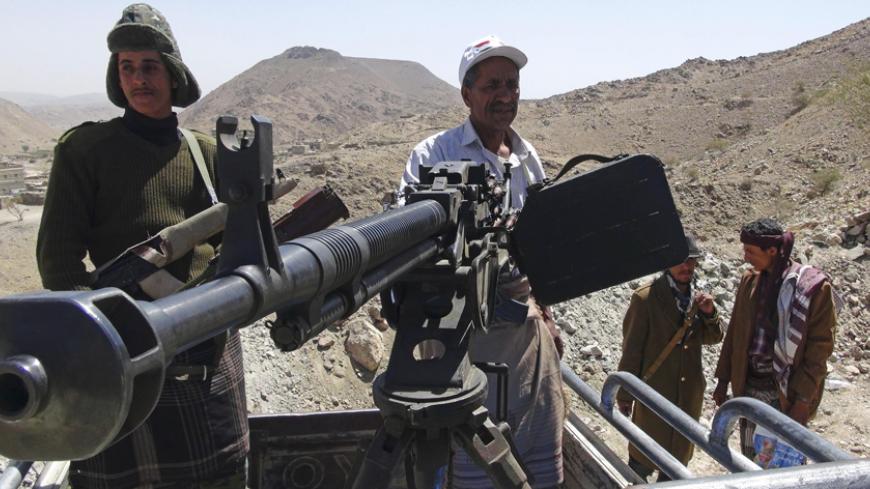 Southern Movement militants man a weapon in the Jabal al-Ierr area of Yemen's southern Lahej province, as they prepare to secure the area against Shiite Houthi fighters, March 7, 2015. - REUTERS

Iran's allies are gaining strength on Saudi Arabia's borders, creating the worst security environment for the kingdom in decades.

Notably absent was Oman, Yemen's closest neighbor. The sultan had been absent from Oman for medical reasons in Munich and apparently did not choose to send a ranking representative to the GCC meeting. He has no heir appointed, which leaves decision-making difficult. Oman is also somewhat more relaxed about Iranian actions than its Gulf allies.

The Zaydi rebel army on March 22 seized much of Taiz, Yemen's third-largest city and the gateway to south Yemen and Aden, where Hadi is trying to rally Sunni opposition to the Houthis. The Houthis are also benefiting from increasingly overt support from forces loyal to former President Ali Abdullah Saleh, who still has influence in the Yemeni military.

The Houthis ordered a general mobilization of their forces after suicide bombers attacked Shiite mosques in Sanaa last week. Houthi sources also reported they have been promised a year's supply of crude oil from Iran and a new power plant. Direct air service between Tehran and Sanaa began in February. Islamic Revolutionary Guard Corps (IRGC) experts are advising the Houthi forces.

The withdrawal of the remaining US military personnel from Yemen only adds to Riyadh's desperation, with Riyadh worried that Washington's priority is a nuclear deal with Tehran, not stopping Iranian subversion in the Arab world.

The Saudis have invited all of Yemen's factions to a meeting on political dialogue in the kingdom but few Saudi leaders have any hope for a political reversal of the Zaydi military gains. Nor do the Saudis expect the United Nations to offer more than token sanctions to punish the Zaydis. Hadi has become increasingly shrill in his comments on the Houthis, leaving little room for compromise. He has also portrayed them as Iranian puppets.

Nayef also oversaw a large exercise by Interior Ministry troops on Saudi Arabia's northern border with Iraq last week. The exercise simulated an attack by Islamic State (IS) terrorists on a border post. Representatives from all six GCC states, Egypt and Jordan also participated in the review.

The Saudis are worried by the IS threat and the al-Qaeda threat from Yemen, but it's the Iranian gains that worry them most. Nayef has been the target of four assassination plots by al-Qaeda in the Arabian Peninsula, but he sees Iran as a bigger danger. Saudi leaders have begun talking about Iraq as "Iranian-occupied" territory. The sight of IRGC commanders like Qasem Soleimani commanding Iraqi Shiite militias and regular troops attacking Tikrit alarms the Saudis.

The Saudis exaggerate the degree of Iranian control and influence over their Shiite brethren in Iraq and Yemen. The Houthis are not Iranian pawns and Iraqi Shiites are not under Iranian occupation. But in Riyadh's estimate the Iranian gains are the biggest successes for their Persian rivals since the shah's fall. The Saudis also fear the Iranians with Iraqi help may try to stoke tensions and violence in Bahrain next.

The last time the kingdom felt this threatened was in 1990 when Saddam Hussein's Iraq invaded Kuwait and was poised to invade the kingdom. Yemen's Saleh openly sided with Saddam then and Riyadh feared a second front in the south. Saudi intelligence was convinced that Saddam and Saleh had plans to partition the Arabian peninsula between them.

King Fahd looked to the United States for aid then, of course, and got it. The danger today is less acute and more from subversion and terror than outright invasion. The Saudis are planning more major military exercises later this year to deter Iran and have pushed the GCC to augment internal security cooperation.

Salman is also looking to see how US President Barack Obama deals with Iran's advances. The Saudis don't like the expected P5+1 nuclear deal with Iran and will look to Obama to balance any deal with Tehran with some off-setting moves to rein in the Iranians in Iraq and Yemen. Counterterrorism cooperation against IS and al-Qaeda in the Arabian Peninsula is much valued by the Saudis, but is not enough.

How Obama balances his Iran policy will be crucial to the health of the US-Saudi relationship.