The king finally comes to town

King Salman of Saudi Arabia won't find solutions to his country's deepest problems during his visit to Washington. 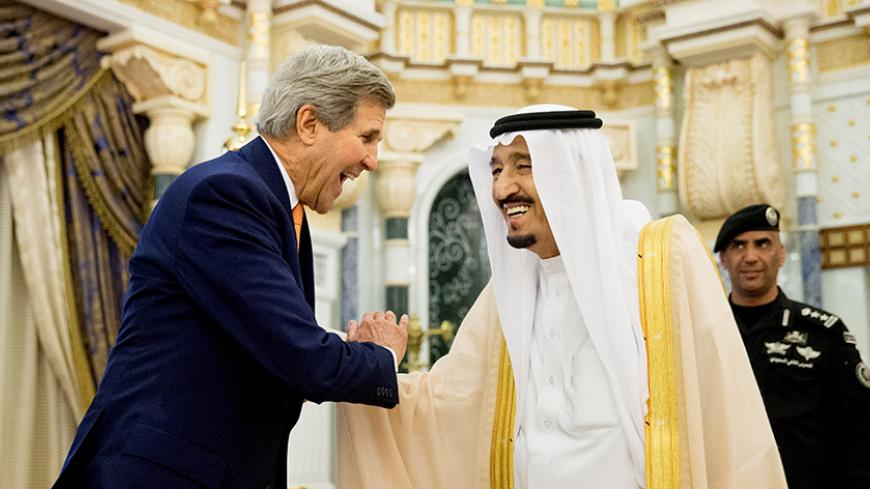 US Secretary of State John Kerry shakes hands with Saudi Arabia's King Salman at the Royal Court, in Riyadh, May 7, 2015. - REUTERS/Andrew Harnik

The first visit to Washington by Salman bin Abdul-Aziz Al Saud as the Saudi monarch comes as the kingdom faces multiple difficult challenges. The Sept. 4 summit will do little to address Saudi Arabia's deep problems, because they are impervious to an American solution.

Salman's top priority is to win the Saudi-led war in Yemen that Riyadh portrays as a decisive response to Iranian aggression and subversion. The king has been praised at home for developing the Salman Doctrine, which emphasizes self-reliance on security issues. The kingdom will henceforth aggressively and decisively defend its interests without depending on American leadership. The Saudis will lead coalitions of like-minded Sunni states to counter Iranian and other Shiite enemies. The doctrine is much more robust than the very cautious and risk-averse approaches characteristic of Salman's predecessors and a response to perceived American indecisiveness toward Iranian gains in Syria and Iraq.

The Saudi coalition has made significant advances after five months of engagement. The port of Aden and the city of Taiz have been captured from the Houthis and their ally, former President Ali Abdullah Saleh. Pro-Saudi Yemeni recruits are being organized into so-called Salman Decisiveness Brigades. Forces loyal to President Abed Rabbo Mansour Hadi have faced difficulties trying to stabilize the territory recovered from al-Qaeda, southern separatists and other militants. Law and order remain elusive, especially in Aden. Hadi continues to stay in Riyadh rather than return home. The Hadi forces rely heavily on Saudi air power and armor provided by the United Arab Emirates.

Hadi and the Saudis say they will seek to take Sanaa from the Houthis this fall, by far the most ambitious operation yet. The city has a population of 2 million. The United Nations reports the Yemeni civilian population is suffering catastrophic conditions, with little food, water or medical supplies. Combat in a major urban area could exacerbate the humanitarian situation drastically. The Saudis already face charges of war crimes and human rights abuses. The king will push for more US logistical and intelligence support for the war and turn a blind eye to its consequences.

The Houthis are not Iranian proxies in fact. They have been fighting Saudi hegemony in Yemen for more than a decade. So far, Tehran has done virtually nothing to help them. Their defeat will have at best only a marginal impact on Iran's regional strength. Meanwhile, the Saudis will face a massive reconstruction and reconciliation challenge in Yemen that will cost the kingdom billions for years to come and produce uncertain results. Saleh is no Iranian stooge either. He used to be Washington's man. For Tehran, Yemen is a perfect quagmire for bogging down the Saudis and Emiratis while it consolidates its influence in Iraq and elsewhere.

The Iranian nuclear deal is a less immediate priority for Riyadh. The Saudis want Iran to remain an international pariah, not to return to the global community with sanctions relief. Publicly they say they hope the deal will lead to better Iranian behavior, but the Saudis don't believe that will happen. Threats to build a Saudi nuclear project have been undermined by Pakistan's refusal to join the Yemen war despite intense Saudi pressure. If Islamabad refuses to send troops to fight the Houthis, it is unlikely to help procure a nuclear weapon.

The capture of Ahmed Ibrahim al-Mughassil, the mastermind of the 1996 Khobar Towers attack that killed 19 American airmen, is a useful reminder for the king to point to when he presses Washington to take tough measures in response to Iranian subversive activities. The Saudis will encourage Congress to pass new sanctions related to issues of terrorism.

Mughassil's arrest also helps underscore the kingdom's important role in fighting al-Qaeda and the Islamic State. The Saudis need to be pressed by Washington to crack down on al-Qaeda in Yemen, a neglected aspect of their war with the Houthis. Al-Qaeda in the Arabian Peninsula is already operating in Aden and controls the port of Mukkalla.

The elephant in the room Salman wants to avoid is Saudi Arabia's second major challenge: succession politics at home. The kingdom is in the midst of a generational change of leadership, from the sons of the modern state founder, Abdulaziz Ibn Saud, to the grandsons. The sons have provided more than a half-century of stability and growth. Salman has shaken the royal power structure by removing his half brother Prince Muqrin from the line of succession, without warning or explanation. The divestment of a sitting crown prince is unprecedented and has introduced uncertainty about the longevity of his replacement, Prince Mohammed bin Nayef, the most pro-American member of the family.

Power has been centralized in Salman's 30-year-old son, Prince Mohammed bin Salman, deputy crown prince and minister of defense, the main architect of the Yemen war. He controls all access to the king, oversees oil policy and has been the main interlocutor for dealing with foreign leaders. Intensely ambitious, Mohammed bin Salman is the epitome of the Salman Doctrine. His pursuit of power is producing strains within the family and uncertainty about the succession process. If the Yemen war is a success, however incomplete, the prince's position will be further strengthened.

The kingdom's third and most difficult challenge is economic. The stability and survival of the monarchy depends on an expensive welfare state. The family bought off potential unrest during the Arab Spring with huge pay bonuses and other handouts. A prolonged period of low oil prices will test the kingdom profoundly. For the near term, the Saudis' huge reserves are cushioning the impact of the low oil prices. Saudi Arabia is much better prepared in this regard than Iran, Algeria and most other producers given its $700 billion or more in reserves. Salman has, however, spent more than $35 billion on bonuses this year, and the war is costing additional billions. New arms purchases will further undermine the social contract.

It is increasingly irrelevant whether Saudi oil production is kept high to protect market share or lowered to try to raise prices. Unless global demand sharply revives, there will simply be too much supply. US shale oil is a big part of the problem for Riyadh. American voters have no sympathy for the Saudis' oil woes.

King Salman's health is a final question mark. As crown prince he maintained a vigorous foreign schedule, but persistent rumors of health concerns have been fanned by the king's long holiday this summer in France and Morocco. If his health appears to falter, his son will need to quickly move his uncle aside or risk becoming the second divested crown prince.

Saudi Arabia and the United States have been uneasy allies for 70 years. They share interests, but not values. They fundamentally disagree about Israel and Palestine. They are drifting apart, but both leaders have an interest in appearing united. Having snubbed President Barack Obama once, Salman wants a more harmonious outcome this time.