Will there be peace in Yemen?

Signs point to Saudi Arabia wanting out of its war in Yemen as Oman-mediated talks open with the Shiite Houthi rebels. 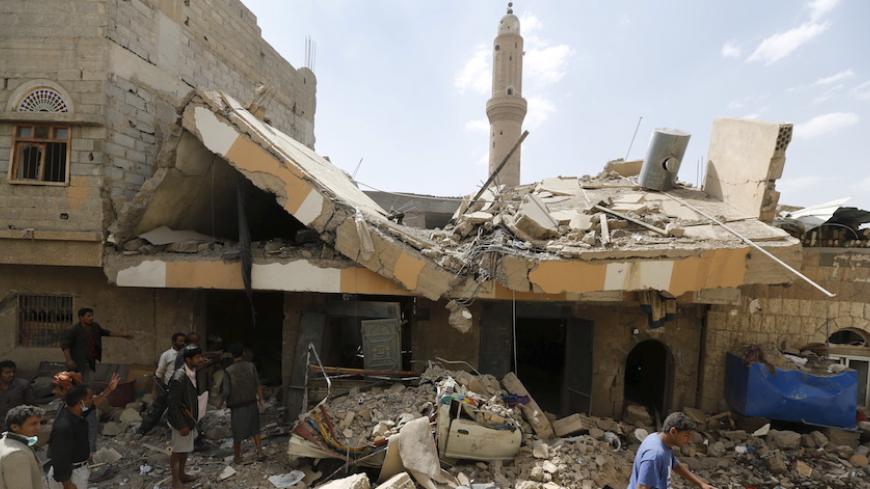 People walk at the site of a Saudi-led airstrike in Yemen's capital Sanaa, Sept. 21, 2015. - REUTERS/Khaled Abdullah

Saudi Arabia appears to be looking for a way to end the nearly year-old war in Yemen. Riyadh seems to recognize it needs to find a compromise with the Shiite Houthi rebels, but the road to a lasting peace will be very difficult.

After quiet mediation by Oman, Saudi Arabia agreed to a visit to Riyadh by two senior Houthi representatives this week, according to press reports. Mohammad Abdul Salem, a Houthi spokesman, is leading the delegation.

The talks come as the war seems to be de-escalating. Airstrikes by the Royal Saudi Air Force seem much less frequent and clashes along the Yemeni-Saudi border less intense. A limited prisoner swap has taken place. The Houthis say they are still confronting "the Saudi-American aggression," but the fighting seems to be slowed. There is no broad cease-fire but there are fewer provocations, at least for the moment.

A lull is desperately needed. The Saudi border provinces along the North Yemen frontier have suffered badly from Houthi mortar and rocket fire. The rebels have taken the war across the border into the kingdom.

The United Nations estimates that 2.4 million Yemenis have been forcibly displaced from their homes. A half million internally displaced people are from the city of Taez, which has been under siege by the Houthis for months. Another quarter million have lost homes in Sanaa due to the bombing there. The Houthi stronghold at Saada has lost another quarter million. Food, water and medicine are in short supply, and things are only getting worse.

The gap between the two sides is wide. No mention has been made about the future of former President Ali Abdullah Saleh and his family. They have been crucial allies for the Houthis, providing sophisticated weapons like Scud missiles. The conventional wisdom has long held that Saleh needs to go into exile for any peace deal to work, but he has not shown any interest in such an outcome.

Another question is whether Saleh's successor President Abed Rabbo Mansour Hadi will be reinstalled in Sanaa, the original objective of Operation Decisive Storm a year ago. Hadi has tenuous control of Aden, where assassinations and bombings are frequent. He has little popular support, however, and has proven to be a weak leader.

Some kind of national unity government may be a solution, but the devil will be in the details. A prolonged pause in the fighting may be a more realistic next step, but it would be much better to have it enshrined in a formal truce agreement than just a vague understanding. A cease-fire would be essential to getting the blockade lifted and relief supplies into the country.

The Saudi interest in talks with the Houthis and de-escalating the war is a step in the right direction. It coincides with an increase in the visibility of Crown Prince Mohammed bin Nayef. The crown prince spent much of January and February out of the kingdom, in Algeria at his father's residence. The prince met with Algerian President Abdelaziz Bouteflika on Feb. 5 in Algiers.

Since returning to the kingdom, bin Nayef has attended a summit of Arab interior ministers in Tunis and held high-profile talks in Paris with President Francois Hollande. He was awarded the Legion d'Honneur for his part in fighting al-Qaeda by the French. He also agreed that Saudi Arabia would receive $4 billion in arms originally planned for Lebanon but suspended during Riyadh's quarrel with Beirut over Hezbollah. This was good news to the French arms industry.

The crown prince is said to be more cautious and risk averse than the king's favorite son, Defense Minister Mohammed bin Salman.

Pakistan's Prime Minister Nawaz Sharif is visiting Riyadh this week. Another skeptic of the Yemen war, Sharif rebuffed Saudi requests to join the war a year ago. His visit this week is said to be intended to reboot the Saudi-Pakistan relationship. He will argue for cooling temperatures between Riyadh and Tehran.

There are plenty of spoilers eager to block any move toward ratcheting down the war. Both the Islamic State and al-Qaeda in the Arabian Peninsula have the capacity to cause mayhem. AQAP has never been stronger. There are doubtless some on both sides in Riyadh and Sanaa who are not eager to stop the violence. Iran has enjoyed watching Saudi Arabia get bogged down in Yemen, and some in Tehran doubtless want the kingdom's quagmire to deepen.

The United States has every reason to want to end this war. It distracts resources from the fight with IS in Syria and Iraq, and fuels sectarian tensions and the proxy regional conflict between Saudi Arabia and Iran. It embitters a generation of Yemenis to hate the Americans for arming the Saudi bombing campaign. The chances of a settlement in Yemen are still slim, but Washington should put some muscle behind the effort.