How Washington, Riyadh can work together to counter terrorism

It would behoove Washington and Riyadh to take steps to reassure each other in the fight against terrorism. 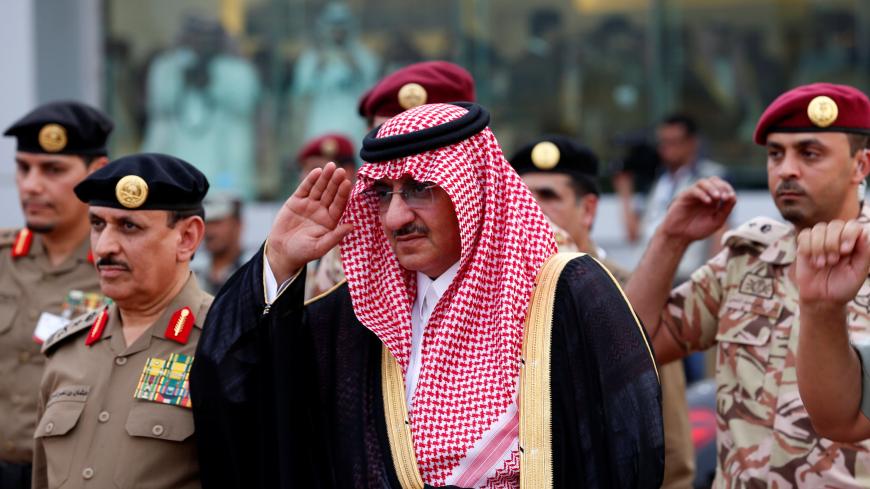 Saudi Crown Prince Mohammed bin Nayef, who is also the interior minister, is key to anti-terrorism operations in the kingdom. Here he salutes at a military parade in preparation for the annual hajj pilgrimage in the holy city of Mecca, Sept. 5, 2016. - REUTERS/Ahmed Jadallah

Saudi Arabia faces a persistent mid-level terrorist campaign by the Islamic State (IS) and al-Qaeda. Neither group is strong enough to threaten the survival of the kingdom but they are capable of high-profile spectacular attacks and assassinations. The Saudis are a crucial part of the war against Islamic extremists for the United States but that partnership is at risk.

This month, the Saudi Interior Ministry reported that 128 terrorist attacks took place in 2016, resulting in 1,147 killed and injured. Two more terrorists blew themselves up Jan. 21 in Jeddah. The most dangerous attack last year was in Medina on July 4 near the Prophet's Mosque, the second-holiest site in Islam, which killed four policemen on the eve of Eid al-Fitr. A suicide bomber also blew himself up close to the US Consulate in Jeddah on the same day and a Shiite mosque in Eastern Province was also attacked; multiple simultaneous attacks are a hallmark of al-Qaeda.

The Interior Ministry killed the mastermind of the July attacks this month in a counterterrorist raid in Riyadh. He had been educated in New Zealand before joining IS in Syria; the organization trained him in explosives. He infiltrated back into the kingdom through Turkey, Sudan and Yemen.

IS called for the overthrow of the House of Saud in its magazine Dabiq more than a year ago. The kingdom formed an Islamic military alliance with 40 members to fight IS, although it is also a mechanism to combat Iran as well.

A more difficult ideological challenge is the one articulated by Hamza bin Laden last summer. Hamza bin Laden was the favorite son of his father, Osama bin Laden, and was with him in his hideout in Abbottabad, Pakistan, just before the American Navy commandos killed the emir of al-Qaeda. In a video last year disseminated by al-Qaeda, Hamza bin Laden called the royal family "great criminal thieves" and said the country's "vast riches" should be more equitably distributed. It's a potent message, especially when low oil prices are forcing cutbacks in the Saudi welfare state.

Hamza bin Laden also accused the Saudi monarchy of being "agents of the Americans." The video includes screenshots of Saudi kings meeting with American presidents over the last few decades. He sharply criticized the Saudi war in Yemen for attacks on al-Qaeda in the Arabian Peninsula and for inadvertently strengthening the Shiite Houthi rebels' grip on the country by failing to dislodge their hold on the capital and other key cities. Hamza bin Laden charged that the monarchy was failing in its responsibility to defend the holy cities from the "Crusaders" and "Safavids."

The current level of violence is much lower than the peak years between 2003 and 2006, when Osama bin Laden called for a revolutionary jihad to topple the Saudi crown. At its peak there were almost daily acts of violence, including attacks on American diplomats and even the headquarters of the Interior Ministry. Policemen were assassinated in broad daylight and firefights were common in all the major cities of the kingdom.

The man responsible for defeating al-Qaeda then is Mohammed bin Nayef, now the crown prince as well as the interior minister. He has been the target of four assassination attempts. His ministry has expanded enormously and may employ as many as a million people. He awarded medals last week to the Interior Ministry officers who found and killed the Medina mosque mastermind. The crown prince is highly regarded among security and intelligence services around the world. He is much less regarded by human rights activists and reformers in the kingdom.

Washington has been a beneficiary of Saudi counterterrorism policies for years. Not only has the Interior Ministry protected American diplomats and expatriates in the kingdom, it has provided actionable intelligence to thwart attacks inside the United States and in Europe.

The key to effective cooperation is strong ties between senior officials. For the last eight years, John Brennan was the point man for cooperation with Mohammed bin Nayef. Kansas Rep. Michael Pompeo is the logical choice to be the new point man as the designated director of the Central Intelligence Agency. He has years of experience with the oversight of the intelligence community on the Hill. It would be wise for him to pay an early visit to Riyadh to assure the Saudi leadership that cooperation against the terrorist threat and the Iranian threat will strengthen. An early visit to Washington by the crown prince also would be smart.

Two issues threaten a strong security relationship. The Justice Against Sponsors of Terrorism Act allows Saudi officials to be taken to court for alleged involvement in the 9/11 attacks. The crown prince's cousins may be among those sued. Moving the US Embassy to Jerusalem from Tel Aviv will be even more damaging to the counterterrorist alliance. Riyadh has already rallied the Organization of Islamic Countries to pre-emptively warn against moving the embassy and to threaten unspecified retaliation. Jerusalem is a core issue for the Saudi royal family. Moving the embassy will prompt a fundamental rethinking of working with the American government.

IS and al-Qaeda are not existential threats to Saudi Arabia given their weaknesses inside the country. But they are capable of mass casualty carnage and murder. They have succeeded in maintaining a clandestine infrastructure inside the kingdom despite a robust effort by the interior minister. Hundreds of Saudis are also fighting with jihadis in Syria, Iraq, Yemen and Pakistan. The struggle to eradicate this threat should come before petty political advantage.