What wave of suicide attacks means for Riyadh's anti-terror efforts

July 4 saw three consecutive attacks against Saudi Arabia, suggesting an infrastructure of terrorism has developed inside the kingdom that authorities must confront. 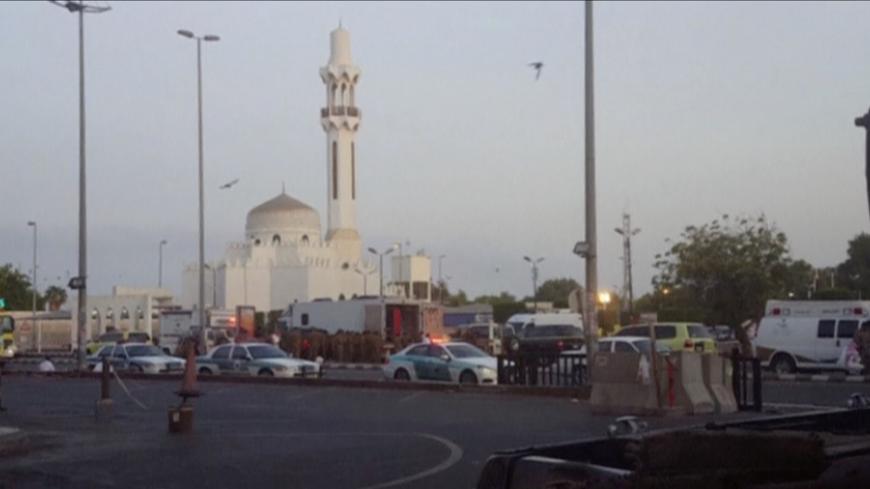 A still frame taken from video shows security personnel in front of a mosque as police stage a second controlled explosion after a suicide bomber was killed and two other people wounded in a blast near the US Consulate in Jeddah, Saudi Arabia, July 4, 2016. - REUTERS/REUTERS TV

King Salman bin Abdul-Aziz Al Saud has a long-established record of leading popular campaigns to raise funds for Islamic causes. Saudi Arabia has been accused of poor oversight of such funding with some money ending up in terrorist hands. It has made considerable progress on this issue, but more still needs to be done. The three bomb attacks July 4 should encourage the king to take tougher measures to combat terrorism funding at home.

In December 1967, King Faisal created the Popular Committee for Support of Martyrs, Families and Mujahedeen in Palestine in the aftermath of the Six-Day War. He choose his half-brother, Prince Salman, who was already the governor of Riyadh, to chair the committee. At first, the committee raised a modest $5 million a year, but by 1978, that had doubled to $10 million. In 1982, during the civil war in Lebanon, it spiked to $45 million. The king remains the committee chairman today and has contributed considerable funds himself, including a check for $100,000 in 2001 for the family of Muhammad al-Durrah, the 12-year-old whose death in the second intifada sparked outrage in the Arab world.

In 1980, King Khalid turned to Prince Salman to chair fundraising for the Afghan mujahedeen fighting the Russians. In the early years of the Afghan war, Salman's fundraising exceeded the government funding covertly coming from the CIA and Saudi intelligence. Without the private Saudi money, the mujahedeen might have been contained by Moscow before Washington and Riyadh upped their official but secret financial help. Salman raised as much as $25 million a month. Three American presidents — Jimmy Carter, Ronald Reagan and George H.W. Bush — encouraged the Saudi financial support.

In the 1990s, Prince Salman was deeply involved in raising funds for Bosnia and its struggle with Serbia. In 1996, Salman visited Bosnia and Herzegovina to distribute money raised for the Muslims and raise awareness for their cause in the kingdom.

The 911 Commission criticized Saudi Arabia for tolerating fundraising for terrorists. While it reported finding no evidence of any official Saudi support for al-Qaeda nor evidence that "senior Saudi officials" funded al-Qaeda, it did conclude that "al-Qaeda found fertile fund-raising ground in Saudi Arabia where extreme religious views are common and charitable giving was both essential to the culture and subject to very little oversight." The report found similar issues in the other Gulf states.

Since 2003, when al-Qaeda began attacking targets inside Saudi Arabia and called for the overthrow of the monarchy, oversight on charitable contributions has much improved. Crown Prince Mohammed bin Nayef deserves much of the credit for this. The US Treasury Department has commended the Saudis for doing a tougher job of ensuring money doesn't get to terrorist organizations. Last year, for example, the Treasury and the Saudis moved jointly against an organization, al-Furqan, in the kingdom that had a long history of funding al-Qaeda, the Taliban and Lashkar-e-Taiba. This year, more groups were added to the list of proscribed fundraisers.

Nonetheless, Hillary Clinton is right to call for even more stringent measures by the Gulf states to ensure charitable contributions don't wind up in the wrong hands. Her statements have brought predictable complaints from Saudi Arabia, but she is wise to keep up the momentum.

The attacks in Jeddah, Qatif and Medina on July 4 add to the urgency of financial controls. The attack at the Prophet’s Mosque in Medina is especially provocative. It is a direct assault on the king’s claim to be the Custodian of the Two Holy Mosques, a key source of his legitimacy. Coming on the eve of Eid, it is a declaration of war. Osama bin Laden refrained from attacking the holy sites during the insurrection he ordered a decade ago.

The other two attacks — on the US Consulate in Jeddah and a Shiite mosque in Qatif — have been done before. Still, staging multiple attacks across the Arabian Peninsula on one day is impressive.

While thankfully the casualties were relatively low, this is the worst wave of violence against the kingdom at home in a decade. It suggests an infrastructure has developed inside the country despite Nayef’s years of tough counterterrorism measures. Washington should put all its resources available behind the fight against terror in Saudi Arabia, but it should also put renewed emphasis on financial oversight.