Saudi Arabia's execution of 47 people, including a poplar Shiite cleric, point to the royal family's growing concerns about the kingdom's stability. 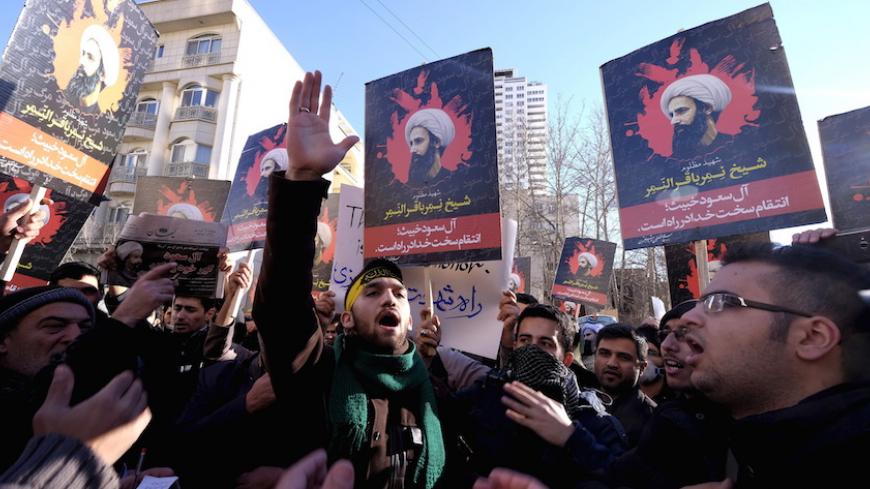 Iranian protesters chant slogans as they hold pictures of Shiite cleric Sheikh Nimr al-Nimr during a demonstration against the execution of Nimr in Saudi Arabia, outside the Saudi Arabian Embassy in Tehran, Jan. 3, 2016. - REUTERS/Raheb Homavandi/TIMA

The executions of 47 accused terrorists in Saudi Arabia Jan. 2 and subsequent severing of relations with Iran underscore the Saudi royal family's deep concerns about stability in the kingdom. The mass executions are a warning that dissent will not be tolerated, especially by Iranian-supported dissidents.

The kingdom faces a potentially perfect storm of low oil income, open-ended war in Yemen, terrorist threats from multiple directions and an intensifying regional rivalry with its nemesis Iran. The most dangerous threat is economic. The Saudi welfare state — which provides subsidies for health and housing, cheap gasoline and free education — is already being cut back because of the large deficit between oil revenues and government spending. Last years' deficit totaled $98 billion and foreign reserves dropped from $728 billion to less than $640 billion. With Iranian oil returning to the market, Saudi revenues could be depleted even faster than anticipated in the 2016 budget.

The majority (43) of those executed were al-Qaeda members arrested a decade ago during the campaign to overthrow the monarchy ordered by Osama bin Laden in 2003. Before the executions, the Saudi Interior Ministry, led by Crown Prince Mohammed bin Nayef, conducted an extensive public relations campaign to remind Saudis and others of the brutal battle with al-Qaeda 10 years ago. Large amounts of material, including videos, captured documents and weapons, were declassified to help explain the threat.

Of course, al-Qaeda remains a major threat today. Its affiliate in Yemen, al-Qaeda in the Arabian Peninsula (AQAP), has grown considerably stronger in the last year due to the collapse of law and order in Yemen. AQAP controls most of Hadramaut province in the south, and has an extensive presence in and around Aden. Almost a year after it carried out the Charlie Hebdo attack in Paris, AQAP is stronger than ever.

The Islamic State also targeted the kingdom and its neighbor Kuwait in 2015. Just last month, Abu Bakr al-Baghdadi, the self-proclaimed caliph of IS, called for the overthrow of the Sauds, arguing that they are secretly allied with Israel. In response, Sheikh Abdul-Aziz Al Sheikh, the Saudi grand mufti, dismissed Baghdadi's claim as a lie. The 72-year-old cleric said, “Actually, Daesh is part of the Israeli soldiers,” using the pejorative Arabic acronym for IS.

The sheikh is a direct descendant of the 18th-century founder of Wahhabi Islam, Muhammad ibn Abd al-Wahhab. The Sheikh family is the theological equivalent of the Saud family. Abdul-Aziz was appointed grand mufti in 1999 by King Fahd, and he wields enormous authority. He sanctioned the mass executions.

Four of the executed were Shiite Saudis accused of inciting and promoting violence in the kingdom's Eastern Province. The killing of the popular Shiite cleric Nimr al-Nimr has sparked protests in Iran, Iraq, Lebanon, Bahrain, Pakistan, Yemen and the Eastern Province. The Saudis have not made as compelling a case against the Shiite dissidents as they have against the al-Qaeda operatives.

Nimr, 55, was educated in Iran and Syria before returning to the kingdom in 1994, becoming an outspoken opponent of the crown prince's father, Prince Nayef. His biggest sin in the Saudis' view was advocating the secession of Eastern Province to form a majority-Shiite state.

Eastern Province, also called al-Hasa, is home to the kingdom's oil wealth and has been an integral part of Saudi Arabia since before World War I. A separate Shiite state would pose an existential threat to the kingdom and its ally Bahrain, where Saudi troops have been shoring up the Sunni-minority monarchy since the eruption of the Arab Spring in 2011.

One Saudi Shiite prisoner not executed is Ahmed Ibrahim al-Mughassil, abducted last summer from Beirut. Mughassil was the mastermind of the 1995 attack on US Air Force personnel at Khobar, in Eastern Province, that killed 19 and wounded 372 Americans. Mughassil is a senior leader of the Saudi Hezbollah group, which is closely linked to both Iranian intelligence and Lebanese Hezbollah. He has been undergoing extensive interrogation since his capture.

Iran has already promised revenge for the killing of Nimr and his colleagues. The annex of the Saudi Embassy in Tehran was ransacked by a mob Jan. 2. The Houthi rebels in Yemen have also promised to avenge their fellow Shiite. If the Saudis choose to up the ante, Mughassil could be brought out to "confess" about his past before being executed. The value of his continued insight into Iranian intelligence operations in the Gulf is probably the only constraint holding the crown prince back for now.