The execution of a prominent Shiite cleric jeopardizes already fragile international efforts to end the wars in Syria and Yemen. 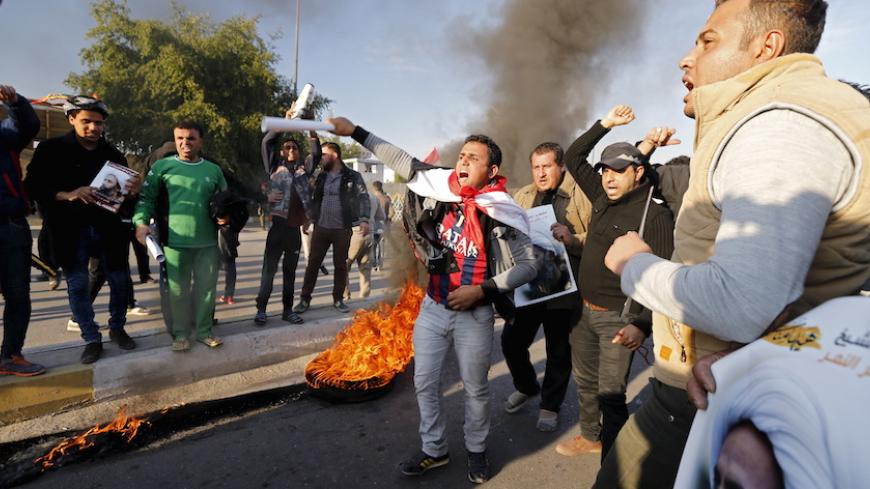 Supporters of Shiite cleric Muqtada al-Sadr shout as they stand near a burning tire in Baghdad on Jan. 4, 2016, during a demonstration against the Jan. 2 execution of Shiite Muslim cleric Nimr al-Nimr in Saudi Arabia. - REUTERS/Thaier Al-Sudani

The execution on Jan. 2 of Shiite cleric Sheikh Nimr al-Nimr, along with 46 others accused of extremism and terrorism, provoked a predictable wave of outrage and demonstrations among Shiite populations across the Middle East, and worsened already terrible relations between Riyadh and Tehran. Saudi Arabia could not have expected anything less. The kingdom broke ties with Iran after demonstrators ransacked the annex to the Saudi Embassy in Tehran, although, as an Iranian diplomat told Ali Hashem this week, “in practice, we had no real diplomatic relations in recent years.”

Of the 47 executed on Jan. 2, 43 were linked to al-Qaeda. The US State Department released a statement that said it was “particularly concerned that the execution of prominent [Shiite] cleric and political activist Nimr al-Nimr risks exacerbating sectarian tensions at a time when they urgently need to be reduced.” The killing of Nimr and three other Shiite citizens for inciting violence in the Saudi Eastern Province suggested that the kingdom was also “using the death penalty in the name of counter-terror to settle scores and crush dissidents,” said Philip Luther of Amnesty International, which characterized Nimr’s trial as “political and grossly unfair.”

Mohammed al-Nimr, the brother of the executed cleric, told Jean Aziz, “Sheikh Nimr’s defense lawyer, Sadeq al-Jibran, skillfully represented my brother. But, I contend that the trial was political, and its outcome was predetermined.” Mohammed al-Nimr offered his explanation for the execution, and said, "When news leaked about the death sentence, we thought that because al-Qaeda and Islamic State members were to be executed, Sheikh Nimr’s name was included to placate some members of the Sunni community and create a sort of sectarian balance. But, we later determined that the opposite was true. The whole intent was to get rid of Sheikh Nimr, with the names of terrorists added to cover that up. This was proven by the fact that 42 of the 47 people who were executed had been on death row for 10 to 13 years, while Sheikh Nimr had been convicted only a little over a year ago.”

The execution of the al-Qaeda figures carries its own risks. This column reported last week that Saudi Arabia could become the next target of the Islamic State. The executions will likely encourage IS, al-Qaeda and their fellow terrorist travelers to seek retribution and expand their operations in Saudi Arabia.

The already fragile Syrian peace process is now on life support. Again, this should have been no surprise. UN Special Envoy for Syria Staffan de Mistura met in Riyadh on Jan. 5 with Saudi Foreign Minister Adel al-Jubeir and Syrian opposition representatives to try to salvage the talks. While Jubeir reaffirmed Riyadh’s commitment to the Vienna process, it is almost impossible to imagine that Saudi Arabia and Iran will be burying the hatchet anytime soon to bring relief to the besieged Syrian people. The expectations for the next meeting of the International Syria Support Group on Jan. 25 in Geneva, regrettably, could not be lower.

The executions coincided with an intensification of airstrikes and fighting on the ground by the Saudi-led coalition in Yemen. UN Secretary-General Ban Ki-moon said Jan. 8 that he was “deeply concerned” about the expanded military operations, especially in residential areas, and reports of the use of cluster munitions by the Saudi-led coalition. A chamber of commerce, wedding hall and center for the blind have been the target of recent airstrikes in Yemen, according to the United Nations. Iranian Foreign Minister Mohammad Javad Zarif, in a letter to Ban about the “Saudi strategy to derail the nuclear agreement and maintain and even exacerbate tension in the region,” claimed that Saudi airstrikes hit Iran’s embassy in Yemen on Jan. 7. There have been 2,800 civilian deaths in Yemen so far as a result of the war.

Bruce Riedel describes Saudi Arabia as now facing “a potentially perfect storm of low oil income, open-ended war in Yemen, terrorist threats from multiple directions and an intensifying regional rivalry with its nemesis Iran.” Riedel writes that “the most dangerous threat is economic.” An International Monetary Fund report in October 2015 concluded, “While the substantial fiscal buffers meant there is no need for a knee-jerk reduction in fiscal spending, a medium-term fiscal consolidation plan needs to be established and a gradual adjustment started.” Riedel continues, “The Saudi welfare state — which provides subsidies for health and housing, cheap gasoline and free education — is already being cut back because of the large deficit between oil revenues and government spending. Last years' deficit totaled $98 billion and foreign reserves dropped from $728 billion to less than $640 billion. With Iranian oil returning to the market, Saudi revenues could be depleted even faster than anticipated in the 2016 budget.”

This week, the kingdom announced that it is considering listing shares in Saudi Aramco, the world’s largest oil producer, which is widely viewed as a means to address the growing budget imbalance. The son of King Salman bin Abdul-Aziz Al Saud, Deputy Crown Prince Mohammed bin Salman — who also serves as minister of defense and head of the Council for Economic and Development Affairs — told The Economist that the kingdom is considering an ambitious economic agenda of subsidy reductions, reform and privatization. While in principle the Saudi economy could, and should, over time benefit from reducing its bloated welfare state, reform and change are not without social and political consequence, especially given the free fall in oil prices and the kingdom’s precarious security predicament.