Are Shiites divided over what to do about Saudi Arabia?

Over the years, Supreme Leader Ayatollah Ali Khamenei of Iran and Grand Ayatollah Ali al-Sistani of Iraq have encouraged Shiites to take opposing approaches toward Sunnis, with ramifications for Saudi Arabia. 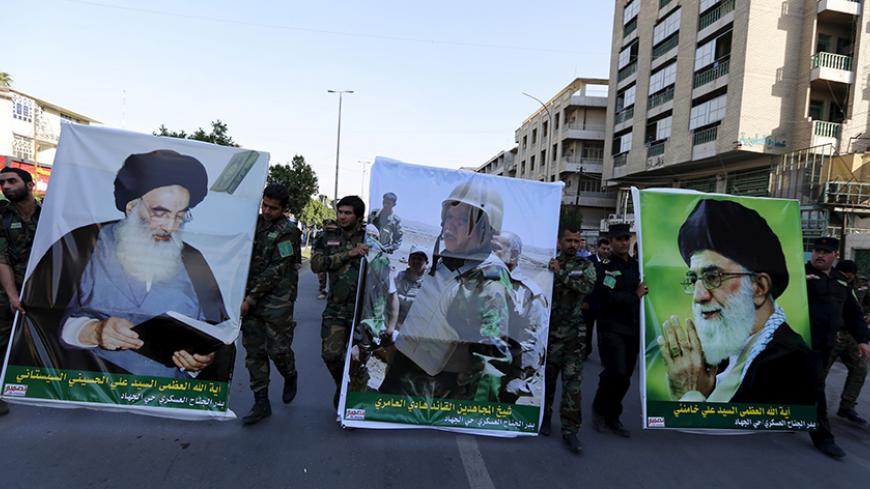 Following the Jan. 2 execution of the Shiite cleric Nimr al-Nimr by Saudi Arabia, Shiite leaders from around the world issued statements of condolence and protest. Among the collection of stances expressed, a clear distinction could be seen between those reflecting the position of Iran's supreme leader, Ayatollah Ali Khamenei, and those following the thinking of Grand Ayatollah Ali al-Sistani, leader of the Najaf Hawza. ​This distinction has been of consequence to the Saudi regime and will perhaps increase in importance with implementation of the Iranian nuclear deal and the public opposition to Nimr's execution.

Khamenei issued a statement Jan. 3 that not only condemned the execution of Nimr and hurled accusations at the Saudi regime, but also went so far as to portend its demise. “The oppressed martyr’s blood will leave its mark, and divine vengeance shall strike down Saudi politicians for their conduct in his regard,” wrote Khamenei. In contrast, Sistani avoided attacking the Saudi regime, and instead expressed solidarity with the families of the 47 people executed — four Shiites (including Nimr) and the rest Sunnis, most of them affiliated with al-Qaeda. Sistani simply stated, “We condemn and denounce what occurred and express our condolences and sympathy to their bereaved families for this great loss.”

The different approaches of the two ayatollahs reflect a divergence between two distinct Shiite philosophies with an effect on Shiite minorities living in majority-Sunni worlds. The dichotomy is also reflective of the positions taken by Khamenei and Sistani over the years in their religious capacities.

Khamenei, the political and religious leader of the largest Shiite country in the region (and the world), considers himself to be the custodian of all Muslims, not just Shiites. On his official website, he describes himself as the “Guardian of Muslims,” a characterization justified by his view that the guardianship of Muslims is a divinely mandated post, about which Muslims have no say irrespective of whether they actually accept him as their guardian.

Meanwhile, Sistani does not consider himself to be the guardian of Shiites in Iraq or anywhere else in the world. He views all Muslims as brothers. In an August 2014 meeting with Shiites from the Gulf, a question arose about professing loyalty to him. Sistani responded, “Do not sanctify anyone and refrain from giving anyone importance beyond their status or rank.” Concerning Shiite relations with other segments of society, he said, “Do not attack or criticize the sanctities and symbols of others. Let mutual respect reign between all.” In addition, Sistani criticized the revolutionary movements of the Arab Spring, considering them seditious and the cause of sectarianism, resulting in heinous crimes.

After Nimr’s execution, official websites affiliated with Khamenei were filled with sharp criticism, similar to his, targeting the Saudi regime, prophesying its imminent demise. Khamenei had also earlier criticized the Saudi regime in various speeches as the Iranian-Saudi conflict intensified in the region.

Sistani, however, has been more balanced when discussing the Saudis. In Nimr's case, Sistani chose first to focus his efforts on preventing Saudi Arabia from actually carrying out the death penalty against Nimr. In doing so, he avoided escalating and inflaming the political-sectarian conflict with the Saudi regime.

According to Saudi Shiite cleric Musa Abu Khamseen, the majority of Saudi Shiites follow Sistani and do not espouse the revolutionary approach advocated by Khamenei. They include the movement represented by Nimr, who belonged to the Shirazi school of thought, known for its religiously motivated opposition to the approach of Khamenei and Ayatollah Ruhollah Khomeini based on political Shiism and revolutionary Islam, mixed with anti-Saudi inclinations. Nimr’s rhetoric focused on civic demands, although the lack of any meaningful redress by the Saudi regime ultimately compelled him to escalate his position and rhetoric. Saudi security forces arrested him after a speech he delivered in June 2012 and charged him with sowing sedition among Shiites.

Iran, after the 1979 Islamic Revolution, began spreading its philosophy to Saudi Arabia, giving rise to a strong anti-Saud opposition movement there, mainly through Hezbollah al-Hejaz, established in 1987. The latter initially attracted supporters from the kingdom’s predominantly Shiite Eastern Province, but collapsed in 1993 when its leadership — including Sheikh Hassan al-Saffar, known for his moderation and contacts with the Saudi regime — entered into negotiations and ultimately signed agreements with the regime concerning the return of exiled Shiite leaders.

In another sign that Shiites in eastern Saudi Arabia are not necessarily hostile toward the regime, Nimr’s brother, Mohammed al-Nimr, despite strongly condemning his brother’s execution, also condemned the storming of the Saudi Embassy in Tehran on the same day.

Sistani’s moderate stance and influence among Shiites is an important opportunity that the Saudi regime could take advantage of to provide equal civil rights to its Shiite minority and help defend against the rise of Iran-backed revolutionary movements. With the implementation of the deal on Iran's nuclear program, the balance of power is shifting in Iran's favor, making such a step urgent if it is to be taken. To strengthen its society against foreign powers, the regime must support all its components and integrate them in a united Saudi Arabia.