In an interview with Al-Monitor, Mohammed al-Nimr, the brother of the Shiite cleric Nimr al-Nimr, who was executed by Saudi Arabia, speaks about his family’s reaction, responses inside and outside Saudi Arabia and the fate of his brother’s body. 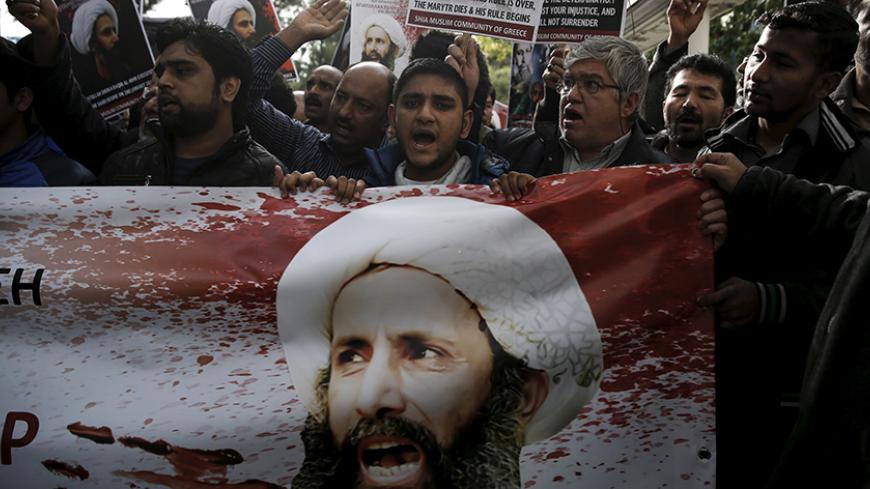 Shiite Muslims living in Greece hold pictures of Shiite cleric Sheikh Nimr al-Nimr and shout slogans during a demonstration against his execution in Saudi Arabia, outside the Embassy of Saudi Arabia in Athens, Greece, Jan. 6, 2016. - REUTERS/Alkis Konstantinidis

With tensions growing between Riyadh and Tehran following the Jan. 2 execution of the dissident Shiite cleric Nimr al-Nimr by Saudi Arabia, Al-Monitor conducted a phone interview on Jan. 5 with Nimr’s brother, Sheikh Mohammed al-Nimr, who resides in the town of al-Awamiya, in the Qatif region of Saudi Arabia. Nimr spoke of the current situation in predominantly Shiite Qatif, the still unfolding crisis stemming from his brother's death, as well as accusations leveled against the late sheikh and his supporters and efforts to obtain his brother's remains.

Al-Monitor:  How did your family learn of your brother’s execution?

Nimr:  It was through Saudi media last Saturday [Jan. 2].

Al-Monitor:  What was your initial reaction?

Nimr:  We were gripped with grief, as people donned black mourning clothes, with all the shops closing their doors in Qatif and its surroundings and condolences accepted in religious centers and some public squares.

Al-Monitor:  ​Did you and your family expect the death sentence to be carried out?

Nimr:  Of course not. That is why we, like all people, were so shocked, because no one expected it. It is true that the appeals and supreme courts upheld the [Oct. 15, 2014] death sentence against the martyr Nimr, but we and his supporters still carried hope that King Salman would not sign the execution order due to its negative repercussions. Despite many warnings in that regard, unfortunately, the order was given by Saudi authorities to carry out the death penalty given to 47 individuals accused of acts of violence and terrorism in Saudi Arabia, with Sheikh Nimr included, despite him being completely innocent of the charges leveled against him. These charges include the denunciation of allegiance to the king, participating in a number of rallies and demonstrations, raising slogans insulting the state, and using his cell phone to incite for demonstrations, covering up of individuals wanted by the security services and helping them escape from police raids, describing security officers as “bandits,” calling the Peninsula Shield Force the “Peninsula Shame Force” and demanding to expel them from Bahrain. And I am sure he is innocent, for he only preached peace and nonviolence, and those are the principles in which all of his supporters and family members believe.

Al-Monitor:  For what cause or against what did your brother become a “martyr”?

Nimr:  A martyr against injustice, for he was unjustly arrested [July 8, 2012] and wrongfully accused. [I attended] all of my brother’s State Security Court hearings, which allows me to unequivocally affirm — and I am ready to be held accountable for my words here — that no one in the court, not even the judge, was convinced that Sheikh Nimr had anything to do with violent actions or illegal endeavors. All that was proven was that his speeches were overly fervent, which may be true, but which has nothing to do with the charges concocted against him. The martyr stood against violence and refused to carry arms when violent events took place in our area during 2012 and 2013, such as the demonstrations by Qatif’s Shiite citizens against the Saudi authorities, where the Saudi security forces resorted to violence to suppress the demonstrators and disperse them.This is evidenced by his [Nimr’s] speeches and lectures against violence and in support of peaceful, non-violent action. Martyr Nimr was not an opposition figure in the professional political sense of the word, and he never demanded the fall of the regime nor did he espouse an agenda in that regard. Convicting him of failing to obey the rules is dangerous indeed. Is someone’s failure to obey now considered legal grounds for a death penalty? What a terrifying premise.

Al-Monitor:  Was your brother given a fair trial and afforded sufficient opportunity to defend himself?

Nimr:  Sheikh Nimr’s defense lawyer, Sadeq al-Jibran, skillfully represented my brother. But, I contend that the trial was political, and its outcome was predetermined, leading to the victimization of martyr Nimr, who is a martyr in the true sense of the word.

Al-Monitor:  Why do you think Sheikh Nimr’s name was included among those sentenced to death?

Nimr:  Honestly, when news leaked about the death sentence, we thought that because al-Qaeda and Islamic State members were to be executed, Sheikh Nimr’s name was included to placate some members of the Sunni community and create a sort of sectarian balance. But, we later determined that the opposite was true. The whole intent was to get rid of Sheikh Nimr, with the names of terrorists added to cover up that. This was proven by the fact that 42 of the 47 people who were executed had been on death row for 10 to 13 years, while Sheikh Nimr had been convicted only a little over a year ago. As such, those death row inmates remained forgotten until a decision was made to have them executed now, only as a cover for Nimr’s liquidation and in order to claim that executions had been carried out against a group of terrorists. We denounce what occurred and will continue to condemn it, using peaceful means of course.

Al-Monitor:  What do you make of the reactions to the execution inside and outside Saudi Arabia?

Nimr:  People were shocked, and a chasm was created between the Shiite community and the Saudi government. Martyr Nimr enjoyed prominence among people and among Shiite Muslims inside and outside the country. He was a diligent scholar and a high-ranking religious figure who cannot be treated as he was without people reacting.

Al-Monitor:  Has there been contact between your family and Saudi authorities concerning Sheikh Nimr’s body?

Nimr:  In a family statement, as well as through intermediaries, we demanded that we be given his body. We will continue to make such demands until his body is returned and buried in his hometown, as per Sharia law and regional customs. His burial in an unknown location is contrary to our customs and utterly rejected.

Al-Monitor:  What do you think of the accusations that Sheikh Nimr and his supporters are loyal to Iran? How do you view the crisis between Riyadh and Tehran following Nimr's execution?

Nimr:  ​This is a political issue with which we have nothing to do. We regret seeing such developments between the two countries and call for good relations between our country and every other country of the world. We also condemn the attacks against our country’s embassy in Tehran [Jan. 2] and the consulate in Mashhad, as that is unacceptable to us. We cannot accept that our country’s facilities are attacked, and [we] hope that matters do not escalate further. Yet, we must understand that the reactions seen in Iran, Iraq, Lebanon, Pakistan, Europe and elsewhere are due to martyr Nimr’s religious status and have nothing to do with interfering in Saudi affairs. Those reactions were also born out of a sense of injustice toward our martyr, for even United Nations Secretary-General Ban Ki-moon personally appealed to King Salman [Oct. 28, 2015] not to execute Sheikh Nimr. But, unfortunately, Saudi politicians and advisers decided otherwise.”