How will Saudi-Iranian crisis affect the region?

As relations between Saudi Arabia and Iran reach their worst levels yet following the Saudi execution of Shiite cleric Nimr al-Nimr, the United States, Russia and the European Union are exerting all possible efforts to avoid a spillover to other countries where these parties wield influence. 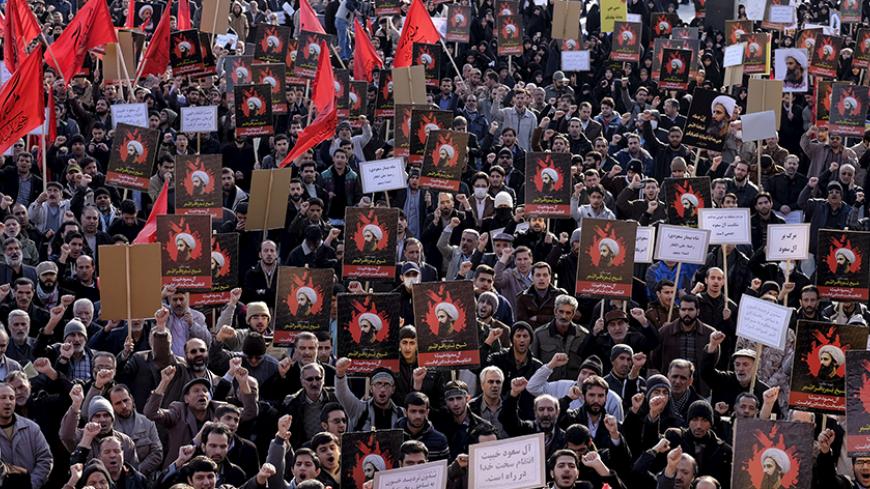 The new year seems to have opened yet another chapter on Middle Eastern instability, as Saudi Arabia executed 47 prisoners including popular Saudi Shiite cleric Nimr al-Nimr, whom it accused of "foreign meddling." The beheadings opened a chasm with Iran on one side and most of the Arab Gulf states on the other.

Diplomatic ties were the only binds left between the countries, following the crisis in Syria, Yemen and Iraq, which took relations to their worst days. Now there are no ties left between Iran and Saudi Arabia, as well as Bahrain, and the United Arab Emirates downgraded its diplomatic representation in Iran to charge d’affaires.

However, “In practice, we had no real diplomatic relations in recent years,” an Iranian diplomat told Al-Monitor on condition of anonymity. The diplomat elaborated on Riyadh officials' decision to suspend diplomatic relations with Iran, saying, “Iran is not their problem. [Iran is just] an excuse to justify their iron-fist policies in the region since 2011.”

Nimr’s execution, unlike his arrest in 2012, did not stir remarkable protests in his stronghold, Qatif, in eastern Saudi Arabia, home of the Saudi Shiite minority. This might be due to the tight security measures that were taken by Saudi authorities, who are reported to have killed one protester Jan. 3 and injured another when a group of angry Nimr supporters burned tires.

Iran and Saudi Arabia are fighting two main proxy wars in Syria and Yemen, where thousands of people are being killed. The resistance bloc is backed by Tehran, with Riyadh backing the moderation bloc.

In Iraq, both parties disagree on who should have a role and what those roles should be, and now, on how the war with the Islamic State (IS) should be fought. The Saudis have concerns over the Iranian role in Iraq — mainly the support given to the Popular Mobilization Units and other Shiite militant groups — while the Iranians accuse Saudis of being the main supporter of terrorism.

In Lebanon, a war of words dominates the scene but seems to be, at the moment, under control. The country — which has been without a president since May 2014 — is divided between the pro-Saudi Future Movement and pro-Iran Hezbollah, and both, despite exchanging harsh statements every now and then, are meeting regularly.

In Bahrain, the Shiite opposition seems to be under heavy pressure from the Saudi-backed royal family. For four years, the opposition in the tiny Gulf kingdom has been demonstrating, demanding reforms and partnership. The state, along with its Saudi allies, accuses the opposition of being backed by Iran and, for this reason, arrested its main figures.

Saudi Arabia seems headed toward escalation, announcing Jan. 4 that it was suspending flights and trade with Iran and calling for an Arab League meeting to take further steps.

“The Saudis seem to have planned their action and reaction all together,” another Iranian government official told Al-Monitor on condition of anonymity. “They knew this wouldn't go away without a minimum reaction. ... They were going to sever ties and pressure other countries to follow suit. For years, Iran lived in isolation and our country is better than many other countries in the region, so what is going to change?”

Iranian officials issued several statements and speeches condemning Nimr's execution, and though some of the commentary was very harsh, that is all they did. There was nothing to be done but for the Iranian side to express its dismay and condemnation of the Saudi act — mainly since Nimr was the leader of the Shiite minority in Saudi Arabia and an ayatollah, which means he could issue Islamic fatwas and edicts.

“[The Saudis] try to fabricate enemies to divert attention from their structural domestic and regional challenges,” the first Iranian diplomat said. When asked if there might be a solution soon, he said, “No, and we are not happy because this hurts us all. But the Saudis are gambling, and they seem to be looking for a fight because they are losing somewhere else.”

The main questions now, with Saudi-Iranian relations at their worst levels, are how this will affect the region and where the two regional superpowers are going to settle their accounts.

The first possible indication was Saudi Arabia’s decision to end the truce in Yemen. Several warplanes resumed airstrikes on the Houthi Ansar Allah rebel movement close to Iran, putting negotiations between the latter and Yemen's pro-Saudi President Abed Rabbo Mansour Hadi in danger. If things continue this way, there is not likely to be a next round of talks and, if there is, a deal might be very hard to reach.

In Syria, while the war continues on the ground, a political path is taking place under the auspices of the United States and Russia. The developments between Saudi Arabia and Iran might halt the already-slow and tiny progress and complicate the efforts, especially if both sides decide to use the Syrian arena to settle their accounts.

Some Arab journalists have suggested that Nimr's execution was in fact due to a Syrian incident, namely the Dec. 25 killing of Zahran Alloush, a Saudi-affiliated commander of the Jaish al-Islam Islamist coalition. The journalists say Saudi Arabia wanted to take revenge for his death by killing an Iranian-affiliated symbol in the same rank of Alloush, and Nimr was their best choice.

That theory presents several questions. One is, why execute Nimr instead of Ahmed Ibrahim al-Mughassil, head of the Saudi Hezbollah (al-Hejaz) Party, who Riyadh says is responsible for the Khobar bombing and of being an Iranian arm? Also, why carry out the execution now, and did the Saudis study the implications not only for bilateral relations but also for the whole region?

It is fair to say the region — even the whole world — is concerned over the Saudi-Iranian crisis. The United States, Russia, the European Union and several Islamic countries are exerting efforts to contain the situation, which might not only harm the region's politics, security and economy, but might also have dangerous implications for every Muslim around the world — given both countries’ influence on political and sectarian groups and the level of incitement fueled by the war in Syria, Yemen and Iraq. The first Saudi-Iranian collision told the world a bit about what might happen if this crisis takes another step up.