Turkish reactions to the Jan. 2 execution of Saudi Shiite cleric Nimr al-Nimr are quite telling for the future of Ankara’s regional policy. 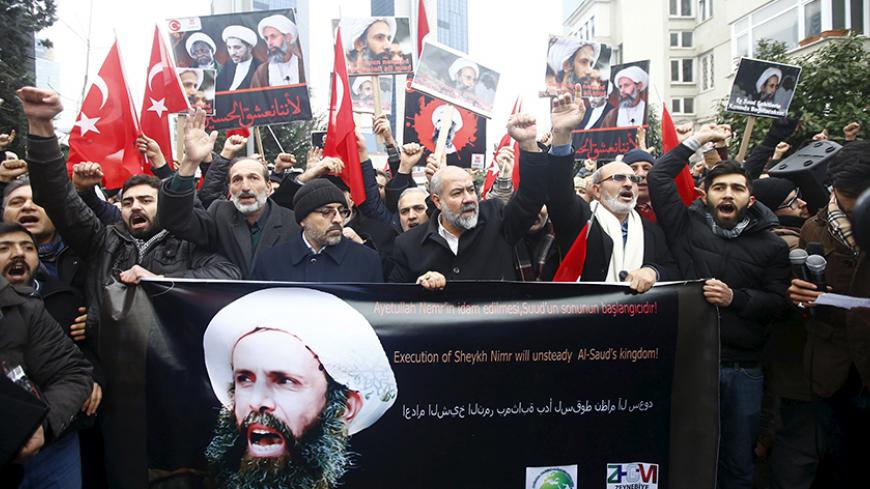 In front of the Saudi Embassy in Ankara and the Saudi Consulate in Istanbul on Jan. 3, small, yet passionate, groups of protesters got together. Holding posters of executed Sheikh Nimr al-Nimr, the protesters condemned Saudi Arabia for the execution. The mainstream media outlets did not report these protests — which were peaceful, despite substantial concerns.

Al-Monitor spoke with Kadir Akaras, the chairman of the Ehli Beyt Scholars Association, which was one of the organizers of the protests. News reports noted this was a protest organized by the Turkish Shiite (Jaafari) community. Akaras said, “People from all sections of society participated: Sunnis, Alevis, Shiites, Kurds and Turks. Despite the cold weather, thousands of Muslims gathered to protest the Saudi regime.” Akaras explained that the Turkish police forces provided extensive security measures at the Saudi Embassy and Saudi Consulate, and yet they were also respectful of the peaceful protesters.

Nimr’s execution Jan. 2 has brought tensions between Saudi Arabia and Iran to another level, leading many to question if the region is on the brink of a sectarian war. Pundits express concerns that Turkey's foreign policy will face further challenges. What will Turkey do in the midst of increasing tensions between Saudi Arabia and Iran? Will growing sectarianism affect Turkey’s precarious domestic politics given its existing problems with the Kurds and the Alevis?

Al-Monitor spoke with a diverse group of pundits and bureaucrats in Ankara and Istanbul about the impact of a potential escalation of sectarian tensions. Most of them emphasized the emerging challenges, while some were more optimistic about finding opportunities in the face of the intensifying Saudi-Iranian conflict. That said, all of them mirrored the somber mood of the Turkish mainstream media of a regional sectarian war being real and imminent.

The Turkish public and media have already been polarized in their support for Saudi Arabia and Iran. While pro-government media outlets are following the lead of Turkish President Recep Tayyip Erdogan and openly back Saudi Arabia, left-wing and marginalized media outlets as well as secular media have been asking for caution and neutrality and raising red flags against increasing tensions with Iran.

Selin Nasi, a columnist for Jewish weekly Salom and contributor for Hurriyet Daily News, told Al-Monitor, “Although we had initial signals from the prime minister’s office about a potential mediator role for Turkey [between Iran and Saudi Arabia, prior to Erdogan’s statement], this is quite a slim possibility. Turkey seems to be allied with Saudi Arabia in Syria and signals deepening this alliance.” Looking at some of the writings of pro-Justice and Development Party pundits within the first 10 days of 2016, it can be seen that their efforts, which validate Nasi’s prediction, aim to prepare the public to support a pro-Saudi stand. Several of these pundits refer to “an Iranian madness” and aggressive expansionist policies, and they voice concerns that Iran is a puppet of Russia.

Ceyda Karan, a prominent foreign policy analyst and columnist for daily Cumhuriyet, was pessimistic about the situation, and said, “I do not see any opportunities for Turkey in light of the rise of sectarian tensions. Indeed, sectarian overtones have been suffused in Turkish political life since the start of the Syrian civil war. Turkey supported the establishment of a Muslim Brotherhood-majority government in Syria. When that failed, a tacit alliance with Saudi Arabia and Qatar was established. After the Reyhanli terror attack, Erdogan, referring to the victims, talked about 'my Sunni citizens.' Despite some competition, with the latest security accord it seems Turkey has declared its side [with Saudi Arabia].”

Alptekin Dursunoglu, an expert on Iran and senior editor of Yakin Dogu Haber, does not hold much hope for change in Turkey's foreign policy. Dursunoglu told Al-Monitor, “Turkey’s Middle East policy has been taken hostage by Syria. Hence, Turkey becomes friends with the countries whose policies align with Ankara in Syria, and enemies with all others.” Dursunoglu highlighted that Turkey stood with Saudi Arabia for its war in Yemen and refrained from using any language to offend Saudi Arabia after the execution of Nimr. Yet he also warned along with many other pundits that this matter is not just risky as a foreign policy issue, but one that would have a direct impact on domestic politics. Dursunoglu added, “It is not only Sunnis that live in Turkey.” Also, not all Sunnis are unconditionally supportive of Saudi Arabia — not in the region and not in Turkey.

Professor Mehmet Ali Buyukkara, a theologian and dean of the School of Islamic Studies at Sehir University in Istanbul, told Al-Monitor that he viewed Turkey’s role from a slightly different perspective. “At the end of December while Erdogan was visiting Saudi Arabia, Director of Religious Affairs Mehmet Gormez traveled first to Iran then to Saudi Arabia, holding meetings with the highest ranking religious figures in both countries,” Buyukkara said. He also emphasized that Turkey cares deeply about ending the bloodshed in the region and represents a different version of Sunni Islam than Saudi Arabia. That said, Buyukkara was not optimistic about an immediate reconciliation with Iran. He said, “Although tensions have risen, it still has the potential to reach a peak between Saudi and Iran. Can Turkey assume the mediator role? It seems difficult given the position we are at in Syria against Iran, and given the perception about Iranian policies toward the [Kurdistan Workers Party] and the Islamic State [IS].”

Erdogan, who is viewed as the main driving force behind Turkish foreign policy, has been consistently pro-Saudi in his rhetoric and policy choices since the start of the Syrian civil war in 2011. Can Turkey find opportunities in the midst of sectarian tensions between Iran and Saudi Arabia? A high-level bureaucrat from Ankara, who asked to remain anonymous, argues that it is possible. She told Al Monitor, “In 2010, Turkey along with Brazil stepped in the forefront to support Iran [nuclear deal]. Now the balance has changed. We can see that there are strong currents within the Sunni world against Saudi Arabia. What will not change is the fact that we share a border with Iran. We would like to sit at the table with Iran. If Iran and Saudi Arabia keep attacking each other, Turkey may find even a graceful exit opportunity out of the Syrian morass. If we can end enmity toward Israel, why would we not embrace Iran? Turkey’s role goes beyond taking sides or being a mediator. We are an active player.”

Indeed, challenging times provide golden opportunities for creative policymakers. However, leaders need to be flexible enough to see and seize these moments. Can Turkey afford to alienate Iran further while fighting the Kurds and IS on its border?

Turkish reactions to the execution of Nimr and the following events are quite telling for future Turkish policy. Although initially the Turkish state establishment has shown restraint, Erdogan has declared the execution “a matter of Saudi domestic politics,” hence it should not be commented on. Iran has diligently questioned Erdogan’s friendship with the Saudis and his involvement in Nimr’s execution. Turkey fears Iran, not only in Syria but also inside Turkey, questioning Iran’s ability to mobilize the Alevis along with the Kurds. Turks are also watching the US-Iran rapprochement and the upcoming Iranian elections carefully. As one Turkish official told Al Monitor, “It is clear who will be in Ankara for the next five years. Once we know who will be in Tehran, we can shape our policies better [referring to the upcoming February elections]. There is no urgency of iron-clad commitments.” For now, Ankara is more interested in balancing Saudi Arabia and Iran against each other rather than mediating in between them. Perhaps while questioning the Turkish position between Iran and Saudi Arabia, we have not yet asked the right questions.