The current crisis between Saudi Arabia and Iran against the backdrop of the execution of Shiite Sheikh Nimr al-Nimr has already affected the strained relationship between Sunnis and Shiites in Lebanon, but will it reinforce Christian political ties? 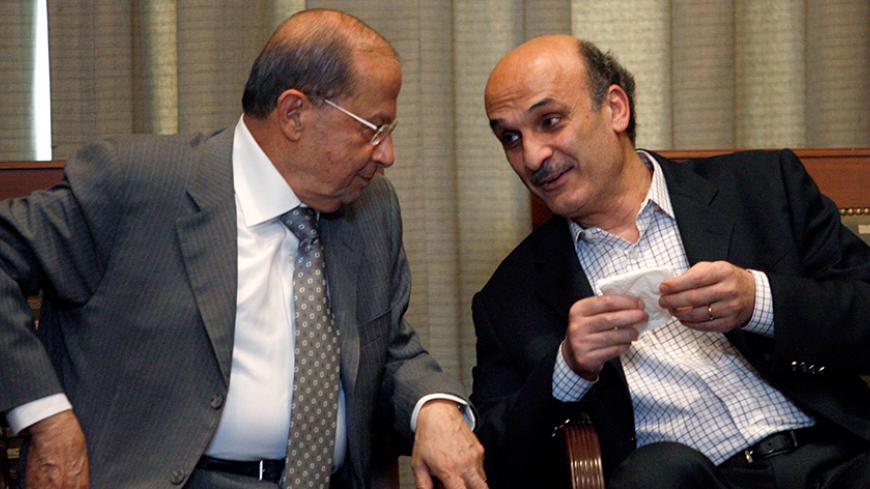 Did the execution of Saudi dissident Shiite cleric Nimr al-Nimr on Jan. 2 kill the opportunity that was on the table for the election of a new president in Lebanon? This question arises in light of the political developments in Beirut and the repercussions of the regional events on the Lebanese situation.

Since mid-November, negotiation efforts were deployed between Sunni majority leader Saad Hariri and member of parliament Suleiman Franjieh for the nomination of the latter as the new president of the republic. Had these efforts for a presidential settlement succeeded, this initiative would have ended the presidential vacuum that has been ongoing since May 25, 2014. The efforts started following a meeting held away from the spotlights in Paris on Nov. 17, 2015, between Franjieh, who is close to Hezbollah and Syrian President Bashar al-Assad, and former Lebanese Prime Minister Saad Hariri, who is close to Riyadh and is the leader of the Sunni majority in Lebanon.

Despite the slowdown of the presidential initiative in the final weeks of 2015, those who launched it remained somewhat optimistic. They insinuated that with the beginning of 2016, the agreement between Hariri and Franjieh — the details of which never came out in the open — may come to life, and it would be possible to see Franjieh filling the presidential seat in the first session of the Lebanese parliament to be held for this purpose, which was scheduled for Jan. 7, 2016.

However, on Jan. 2, Riyadh executed Nimr, causing successive reactions and repercussions in Beirut.

On Jan. 3, Hezbollah Secretary-General Hassan Nasrallah appeared in a televised speech and launched a sharp attack on the rulers of Saudi Arabia, accusing them of assassinating Shiite dissident Nimr.

Nasrallah lashed out at the Saudi family, saying, “The blood of Sheikh Nimr today fills the faces, the bodies, the history, the present and the future of Al Saud [family] until the day of judgment. This blood will haunt them down in this life and the afterlife. This blood that was spilled will write the end of Al Saud regime.”

A few hours later, the opposing Lebanese camp, the March 14 coalition, also reacted to the Saudi event. Hariri issued a statement fiercely slamming Nasrallah’s speech, accusing him of loyalty to the Iranian policy in the region.

Hariri blasted Nasrallah's statements about “terrorism, murder, criminality, sectarian sedition, the exclusion of opponents, the elimination of parties, organizations and clerics and the destruction of their homes and headquarters,” asserting that “these practices are indeed applied by the Iranian regime and its expansion project to the detriment of Arabs, their states and societies.”

Within hours following the execution of Nimr in Saudi Arabia, it appeared that the Lebanese arena would feel the aftershocks.

It also appeared that, despite the Lebanese tendency toward confrontation between Hezbollah and the Hariri-led Sunni majority team, a fundamental part of the battle between the two camps was an extension of the overall battle raging in the region, between the axes of Iran and Saudi Arabia.

In the few days that followed the Nasrallah-Hariri altercation, it seemed that the matter would not end. Since Jan. 2, the Shiite regions across Lebanon (from Beirut to the south and the Bekaa Valley) witnessed a series of protests, activities and events condemning Nimr’s execution.

Team Hariri, which is close to Saudi Arabia, tried to divert attention from the execution of the Saudi Shiite dissident by putting the spotlight on the blockade imposed on Madaya, a Syrian village near Damascus, which is leading to the starvation of its trapped residents. They alleged Hezbollah’s potential participation in this blockade. Hariri and his advocates shifted attention from Nimr’s execution to Madaya’s issue through a series of daily statements made by the MPs and ministers of his bloc.

In light of the tensions between Hariri and Hezbollah — which reached their peak with Nimr’s execution — an agreement between the two parties to facilitate the election of a president, irrespective of the candidate, seems to be far-fetched in light of the heated situation.

The head of Hezbollah's parliamentary bloc, the Loyalty to the Resistance Bloc, MP Mohammad Raad, implied on Jan. 4 that his team rejects Hariri’s presidential initiative, accusing him — without naming him explicitly — of seeking through this initiative to return to Lebanon to plunder the country anew.

In light of this development, it was only natural for the parliamentary session No. 34 — set for Jan. 7 and held for the election of the president — to fail. The required constitutional quorum — which is a two-thirds majority of deputies or 86 MPs currently out of 128, as per Article 49 of the constitution — was not reached, and even the main parties involved with the presidential initiative did not attend.

Hariri did not return to Beirut from Saudi Arabia where he has been residing since his government’s resignation in January 2011. His party claims that he cannot return for security reasons.

Franjieh did not attend the parliament session either, whether in his capacity as a deputy or as candidate of consensus between the parties to the presidential conflict.

Thus everything is frozen in Beirut. The new battle raging between Riyadh and Tehran has materialized on Lebanese grounds between Hariri and Hezbollah. However, this preliminary outcome may not be the only one. The same regional developments may pave the way for other possible interactions, most notably the two following possibilities:

The first possibility is that this Sunni-Shiite conflict — outside Lebanon’s borders between Saudi Arabia and Iran, and in the Lebanese arena between Hariri and Hezbollah — will lead to the rapprochement between the Christian forces. This would result in the main Christian parties (Lebanese Forces and the Free Patriotic Movement) agreeing on a single candidate for the presidency.

This would significantly tip the balance of power of the presidential elections. It should be noted that such a hypothesis has been circulated within the political and media circles in Beirut in the first 10 days of 2016. Talks have been spreading about progress in negotiations between the leaders of the two largest Christian parliamentary blocs — Free Patriotic Movement leader Gen. Michel Aoun and Lebanese Forces leader Samir Geagea — to reach a bilateral agreement approving Aoun’s candidacy for presidency.

The negotiations between Aoun and Geagea started secretly at first more than a year ago. Then they came out in the open on June 2, 2015, following a visit that Geagea paid to Aoun at his house, and the negotiations resulted in a declaration of intent between them. The presidential negotiations followed.

MP Ibrahim Kanaan, secretary of the Aoun-led parliamentary bloc, the Change and Reform Bloc, is negotiating with Geagea’s team and did not deny this possibility. He told Al-Monitor that the negotiations between the two Christian groups have come a long way and a comprehensive agreement is in progress at the governmental, presidential and parliamentary levels.

Kanaan said that such an agreement would set a joint vision for the next stage, implying that this agreement may be announced very soon.

The second possibility that the current Saudi-Iranian crisis may produce in the Lebanese scene will be materialized if a given settlement is reached for this crisis within a reasonable timespan. This would be the case if the ongoing international interventions contain the crisis and then launch a series of remedies to the lateral crises marring the relationship between Riyadh and Tehran, including the Lebanese presidential crisis, the situation in Yemen, Iraq, Bahrain and Syria, and the bilateral relations.

Any settlement between Saudi Arabia and Iran, even a partial one, would lead to a series of small settlements, reaching a solution for Lebanon’s dilemma and the election of a new president.

Lebanese parliament Speaker Nabih Berri has set the next parliamentary session for the presidential elections on Feb. 8. Until then, we have to wait and see what the chances are of any of these two possibilities. Will the dialogue between Aoun and Geagea lead to an agreement between them or will the crisis stirred by the execution of Nimr lead to a political solution between Tehran and Riyadh? Or on the contrary, will it lead to the annihilation of all chances of political solutions between them from the Gulf to the Mediterranean in Beirut?

It is hard to predict what will happen. But if the Lebanese politicians manage to prioritize their internal willpower over the pressuring external factors, Geagea would support Aoun, and the presidential elections would have a bigger and serious shot. But if the external factors prevail, Beirut would have to enter a new stage of waiting for the regional developments to be worked out.