Will Lebanon finally get a new president?

After 32 tries failed to produce a winner in Lebanon's long quest for a president, observers hope the 33rd time's a charm. 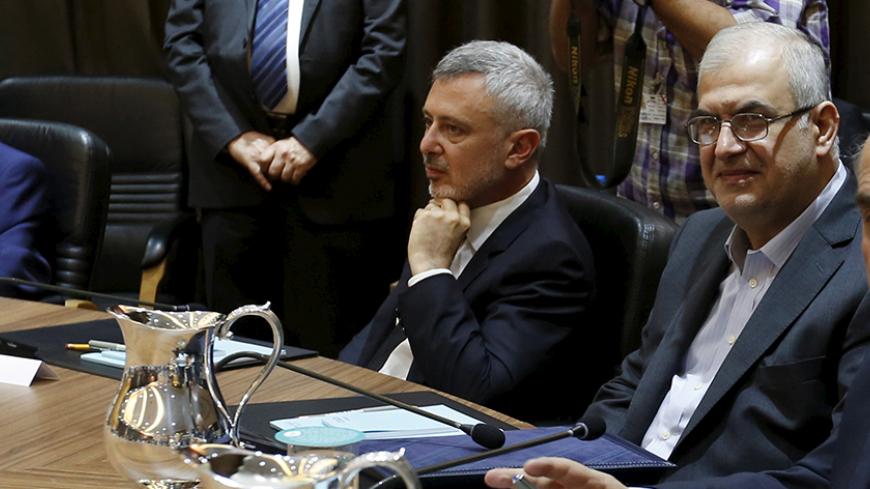 Leader of the Marada movement, Suleiman Franjieh (C), attends the third session of the national dialogue talks aimed at discussing ways out of a political crisis, at the parliament building, in downtown Beirut, Sept. 22, 2015. Could Franjieh be elected president? - REUTERS/Jamal Saidi

Beirut is abuzz with the possibility that the Dec. 16 parliamentary session will bring a major breakthrough with the election of a new president, after 32 failed attempts. Almost 18 months have passed since President Michel Suleiman vacated the presidential palace at the close of his tenure May 24, 2014.

The possibility of a successful election is the result of key developments in the positions of some of the relevant political factions, which has reshuffled the deck, to the surprise of many. To grasp the developments, one must know the reasons that have prevented the election of a president for more than a year.

At the first session convened to elect a president, on April 23, 2014, members of parliament found themselves divided into three camps. The first group, the March 14 coalition, included the Sunni majority led by former Prime Minister Saad Hariri, the Christian minority represented by the Lebanese Forces Party, the Lebanese Kataeb (Phalange) Party and a number of independent Christian MPs, including Boutros Harb and Nicolas Ghosn.

Another camp was the March 8 coalition, comprising the two main Shiite factions, Hezbollah and Amal, along with the smaller Baath Party and the Syrian Social Nationalist Party (SSNP), and the head of the Christian majority, Gen. Michel Aoun.

The other group included Druze leader Walid Jumblatt, in addition to a number of Christian MPs representing electoral districts under his political control in the Chouf and Alay regions of southern Mount Lebanon.

This array soon made it apparent that the parliament would be unable to elect a president because the March 14-led faction endorsed the candidacy of Samir Geagea, head of the Lebanese Forces Party, while the March 8 camp and Aoun refused to name a candidate, submitting blank ballots to demonstrate their parliamentary power. Meanwhile, Jumblatt nominated Henri Helou, an MP in his parliamentary bloc, the Democratic Gathering. In the first round of voting, Geagea received 48 votes to Helou's 16. There were also 52 blank and seven invalid ballots. A total of 124 MPs attended the session; Hariri, who was out of the country, was one of four not present.

The session failed to produce a president because Lebanon’s constitution requires a two-thirds majority, or 86 total votes, in a first-round election vote. An absolute majority of 65 votes is required in later rounds.

Consequently, when parliament Speaker Nabih Berri called for a second round of voting that day, the March 8 coalition and Aoun’s bloc, the Change and Reform bloc, withdrew under the pretext that the first vote clearly indicated the inability of any one candidate to obtain the constitutionally mandated majority, rendering another vote a futile endeavor.

It thus became clear that the candidates of the main political factions, the March 14 and March 8 coalitions, would be unable to win, as neither group could garner the necessary votes. It appeared that Jumblatt held the trump card both factions needed to assemble the needed 65 votes, should the two main factions agree to assemble a quorum.

Thus, throughout 18 months, the preceding conundrum dominated the Lebanese presidential electoral scene, with Berri calling for 32 sessions, all of them lacking the constitutionally mandated quorum as the factions failed to agree on a single candidate. Jumblatt maintained his position, which diverged from that of both main factions. The equation remained unsolvable until mid-November 2015, when a remarkable breakthrough led to a change of positions and a reshuffling of alignments.

The surprise development emerged when news leaked in Beirut that the head of the Sunni majority, Hariri, secretly met Nov. 17 in Paris with the head of the Marada Movement, Suleiman Franjieh, who also leads a three-MP parliamentary bloc that is part of Aoun’s larger bloc.

Information came to light indicating the meeting was part of a tripartite arrangement that included Druze leader Jumblatt with the aim of Hariri and Jumblatt backing Franjieh’s candidacy for the presidency.

Thus, it seemed the presidential status quo could be broken because, numerically, the new alliance could now guarantee the quorum needed to elect a president, as Hariri and Jumblatt’s parliamentary blocs joined forces with Franjieh’s diminutive bloc.

But apparently the fundamental hurdle to electing a president has nothing to do with quorums or numbers, but is political and related to historical backgrounds. In that sense, Franjieh is politically opposed to Hariri, in his capacity as a staunch ally of Syrian President Bashar al-Assad, while Hariri is more in tune with Saudi Arabia’s position. What changed, then?

Here, some questions began to emerge, accompanied by underlying calculations and difficulties. People wondered how Hariri, an ally of Saudi Arabia and a former prime minister, could choose an Assad ally to be the president of Lebanon. Many theories were advanced to explain this turnaround.

The first theory was posited by Hariri’s own camp. Former MP Fares Soueid, the March 14 secretariat coordinator, told Al-Monitor that, after 18 months of presidential vacuum and a balance of power, Hariri’s team had grown certain that it needed to win over Jumblatt and some factions of the March 8 coalition to form a majority capable of emerging victorious in a presidential election.

Furthermore, those same people proclaimed their certitude that Assad would soon be toppled, either politically or militarily. Therefore, his influence on some of his Lebanese allies would completely evaporate, rendering such allies, Franjieh included, in need of a substitute source of protection.

Thus, espousers of said theory from Hariri’s camp claimed that these factors allowed Hariri and Jumblatt to now come up with the idea of endorsing Franjieh for the presidency. This talk, postulated by a variety of MPs and politicians from the Hariri camp, was seemingly confirmed by Hariri himself to a number of interlocutors, as per Soueid.

In that context, Soueid said he personally heard such talk from Hariri. He added that after news spread about Hariri’s endorsement of Franjieh for president, the former called Soueid in late November 2015 to explain that he viewed current circumstances as being akin to the spring of 2005, when the Syrian army withdrew from Lebanon.

At that time, Hariri told Soueid, he had felt compelled to reassure Assad’s Shiite allies to avoid a violent reaction on their part. This led to his alliance with them, namely Hezbollah and Shiites, in the parliamentary elections of 2005. Soueid further cited Hariri as saying that he believed current circumstances to be a repeat of those that prevailed then: Assad will be toppled, and Hariri will need to reassure Shiite Hezbollah to keep it from resorting to violence, by endorsing the candidacy of Hezbollah’s close ally Franjieh, who would also need political cover following the ouster of his friend Assad.

But, a completely conflicting theory also was proposed to explain the change in stances, with March 8 supporters in Beirut believing that the exact opposite situation formed the motivation for Hariri and Jumblatt’s decision to endorse Franjieh. Elie Ferzli, a former deputy speaker of parliament who has close ties to Hezbollah and Aoun, told Al-Monitor that Hariri’s camp was now cognizant of the fact that the balance of power in Syria had shifted in favor of Assad and his regime, after Russia’s involvement in the war there.

As a result, easing the pressure on Assad would result in reduced pressure on Hezbollah and its allies in Lebanon, with Hariri and Jumblatt finding themselves forced to mitigate losses because time was not on their side. They thus rushed to endorse Franjieh in an attempt to prevent further disruptions to the balance of power — which would compel them, later on, to back the Christian majority’s leader, Aoun, for president. Consequently, Ferzli added, Hariri and Jumblatt viewed Franjieh as the lesser of two evils compared with Aoun, who advocates comprehensive countrywide reforms.

In that regard, yet another theory hypothesizes that the change of stance had nothing to do with the positions of Lebanese factions or battleground developments in Syria. Some believe that Hariri and Jumblatt’s about-face to endorse Franjieh was the result of a partial intersection of interests between Tehran and Riyadh, with Iran and Saudi Arabia agreeing to shield Lebanon from their conflicting interests in Yemen, Syria, Bahrain and Iraq, despite their disputes over a variety of regional issues.

According to espousers of said theory, this rapprochement started Nov. 14 on the sidelines of the latest Vienna conference; as a result, Hariri met with Franjieh on Nov. 17, after the Iranians, through their Syrian allies, expressed desire for him to do so.

Nonetheless, it seems clear that these theories fail to explain the events taking place in Beirut, as evidenced by the fact that electing Franjieh as president continues to face a great number of reservations from the allies of all parties involved. In that regard, Hariri’s Christian allies, particularly the Lebanese forces and Kataeb parties, have yet to endorse the Hariri-Franjieh agreement; meanwhile, Franjieh's allies, particularly Hezbollah and Aoun, maintain silence regarding their adversary’s choice of a candidate from among their ranks.

The door is open for the Paris agreement, represented by the Hariri-Franjieh meeting, to collapse, with Dec. 16 possibly coming and going without Franjieh being elected president.

The question thus arises as to whether this agreement is merely a maneuver aimed at choosing a weak candidate, or in preparation for Jumblatt to switch sides and endorse Aoun’s candidacy. Jumblatt’s transition seems to have started with him refusing to continue the status quo, and thus supporting Assad’s personal friend Franjieh; this would make it less embarrassing for Jumblatt to then back an ally of Hezbollah, i.e., Aoun.

Wherever the truth may lie, it seems that the end of 2015 will bring with it great political developments in Beirut.