Michel Aoun and Samir Geagea, the two Lebanese Christian leaders, finally turn the page on their historical bloody feud and have agreed on backing Aoun for president. 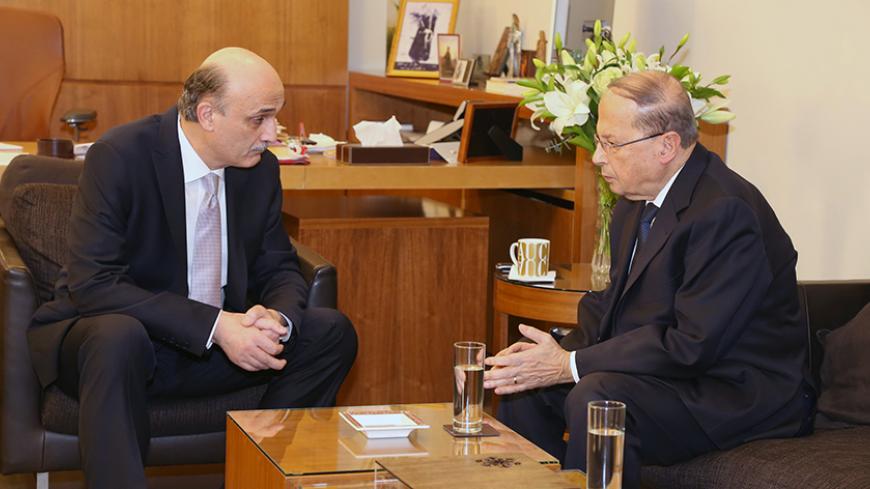 The meeting Jan. 18 between the leaders of the two largest Christian parties and parliamentary blocs in Lebanon — Gen. Michel Aoun, former leader of the Free Patriotic Movement and the Change and Reform bloc, and Samir Geagea, the head of the Lebanese Forces — can be described as a miracle.

After more than a year and half of negotiations, Aoun visited Geagea at the latter's headquarters in the village of Maarab, in Keserwan, Mount Lebanon. During a press conference following the meeting, Geagea announced his support as well as his party’s support for Aoun’s candidacy for the vacant presidential seat — a seat that was left empty after the term of President Michel Suleiman ended on May 24, 2014.

Aoun and Geagea waged a bitter struggle against each other and were fierce rivals for nearly 30 years. When Geagea presided over ​​the Lebanese Forces during the Lebanese civil war in 1986, he entered into a tense relationship with Aoun, who was then the Lebanese army commander.

The multiple factors in this struggle included the quest to become the top Christian leader and the ambitious project to become president. The struggle was also influenced by the position and alliances with other Lebanese forces, and even with external forces that had a special influence on the Lebanese arena.

The rivalry reached its climax following the vacancy of the presidential office between 1988 and 1990, when an open military civil war was waged between the two men.

The civil war only ended when the Syrian army invaded Lebanon on Oct. 13, 1990, at which time Aoun was militarily defeated and was exiled to France. But after nearly four years, and in light of the Syrian tutelage over Lebanon, Geagea was put behind bars on April 21, 1994, on charges of committing several crimes during the military war. Thus, the first phase of the struggle between the two leaders ended with their mutual defeat that lingered on until the Syrian army's pullout from Lebanon on April 26, 2005.

On May 7, 2005, Aoun returned to Beirut and Geagea was released in July 2005 in the wake of the Cedar Revolution. But suddenly, the men’s old feud was rekindled as another presidential election loomed on the horizon, at the end of the term of President Emile Lahoud, who served for an extended mandate engineered by the Syrians.

In this context, the UN Security Council issued, on Sept. 2, 2004, Resolution 1559 stipulating the holding of presidential elections in Lebanon and the withdrawal of all foreign — that is, Syrian — armed forces from the country.

Once again, the relationship between the two men turned ice-cold; they chose to ally themselves with opposing political camps. During the first parliamentary elections, held after the Syrian withdrawal from the country, in the spring of 2005, Geagea allied with the Sunni majority team led by former Prime Minister Saad Hariri. Meanwhile, on Feb. 6, 2006, Aoun concluded a memorandum of understanding with the Shiite majority team led by Hezbollah Secretary-General Hassan Nasrallah. The divide between the largest Christian poles once again led to their mutual defeat.

Lahoud’s presidential term ended on Nov. 24, 2007, and the presidential elections were postponed several times. Thus, Lebanon entered a new phase of being without a president that lasted until May 25, 2008, when Suleiman was elected to the post. During this period, tensions escalated to the point of direct military confrontations between Hariri and Hezbollah on May 7, 2008. This clash paved the way for a Qatari-Turkish settlement that ended with the election of Suleiman, who was commander of the armed forces and not affiliated with either Geagea or Aoun.

As Suleiman’s tenure came to term, questions were raised whether Aoun and Geagea would reignite their struggle for the third time in a row. Indeed, this has been the case for a year and a half now. Geagea announced his candidacy for the presidency in 2014, supported by Hariri as his ally, while Aoun, supported by his Shiite allies, refused to accept Geagea’s candidacy. These two intransigent positions crippled the presidential election since the first session to elect a president on April 23, 2014. The paralysis eventually led the country — after the end of Suleiman’s tenure — into a new vacuum.

Since January 2015, two new strange channels of communications were secretly opened in Beirut. Contacts were made behind the scenes between one of Aoun’s allies, member of parliament Suleiman Franjieh, and Hariri. Other contacts were also underway between Aoun and Geagea, through their mutual representatives, member of parliament Ibrahim Kanaan and Geagea media official Melhem Riachy.

For over a year now, these two developments paved the way for two major occurrences. Following Franjieh’s meeting with Hariri in Paris on Nov. 17, 2015, an agreement was orchestrated to back Franjieh as the new president. Aoun and Geagea rejected the agreement and a mutual rapprochement was engineered that ended Jan. 18 with Geagea backing Aoun’s candidacy.

Thus, the hidden stitches in this ironic miracle would have been clarified. Aoun and Geagea’s relationship is marred by their previous bitter political struggle and their war over the presidential seat; their current positions reek of divergence on all levels.

Aoun is Hezbollah’s ally and Geagea is Hariri’s ally. Aoun maintains a good relationship with Iran. Geagea has a close relationship with Saudi Arabia. Aoun was a presidential candidate supported by Geagea's opponents. Up until the historical meeting between the two leaders, Geagea remained a presidential candidate backed by Aoun’s opponent Hariri, who suddenly turned against both leaders and nominated Franjieh as president. Yet, or rather consequently, Aoun finally met Geagea and the two reconciled.

Kanaan — one of the architects of this reconciliation — told Al-Monitor after the Jan. 18 meeting, “The agreement between the two leaders is comprehensive and goes beyond the presidency issue. More importantly, this breakthrough agreement aspires to attract all of the Lebanese forces.”

His counterpart, Riachy, also told Al-Monitor that this agreement is not directed against any particular party. He stated that it is an irreversible process.

But what are its direct consequences on the presidential elections? Is the Aoun-Geagea agreement enough to secure Aoun’s seat in the presidential palace? The first reaction of presidential candidate Franjieh seemed negative. He was quoted as confirming that he maintains his candidacy, after having repeatedly declared that he would withdraw in favor of Aoun, if supported by Geagea.

It seems that the other parties are reluctant to take a stance. But a Christian minister who helped orchestrate the Geagea-Aoun meeting told Al-Monitor that what happened Jan. 18 reflects an almost unanimous Christian support of Aoun as president.

The minister told Al-Monitor on condition of anonymity, “More than 85% of the Christian public opinion is now with Aoun, after Geagea and his party granted him full support. If this quasi-Christian consensus proves to be unable to lead to the election of a president, things may then move toward radical developments. It will then be clear that the entire Lebanese political regime is no longer viable.”

In other words, the miracle of Jan. 18 raised the following ultimatum: either Aoun is elected as president, or the Lebanese Republic will no longer be the same and will no longer have a president unless under a different political and constitutional system.

It seems clear that what pushed Geagea to support Aoun’s candidacy is the fact that his ally, Hariri, backed his foe, Franjieh, without consulting him. But the recent rapprochement between the West and Tehran may have repercussions on the Lebanese political scene, as Hezbollah has supported the Geagea-Aoun meeting and is excited about Aoun’s chances of being elected president of Lebanon.