Hezbollah's pick for president of Lebanon

It seems Hezbollah is not giving up on Christian parliament member Michel Aoun’s candidacy for the Lebanese presidential elections, especially since Aoun now has the support of another major Christian leader in Lebanon, Samir Geagea. 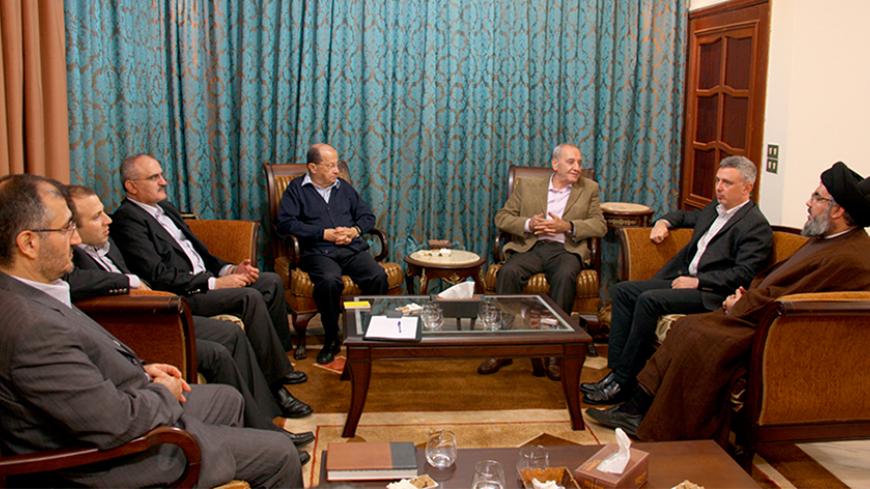 For Hezbollah to choose between Lebanese presidential candidates Michel Aoun and Suleiman Franjieh is like choosing between sweet and sweeter, but the choice itself is bitter.

Both Christian parliament members are close allies of the Islamist movement and fully supportive of all the controversial decisions the group has made in the past few years. Aoun, leader of the Free Patriotic Movement, and Franjieh, head of the Marada Movement, both had been in the Change and Reform parliamentary bloc until the latest standoff over the presidency began in November. Future Movement leader Saad Hariri stirred the pot by nominating Franjieh for presidency after they met secretly Nov. 17 in Paris.

That unique and complicated situation shuffled Lebanon's political cards, temporarily loosening the iron grips of the March 8 and March 14 coalitions, whose rivalry dominated the Lebanese political arena after the 2005 assassination of former Prime Minister Rafik Hariri, father of Saad Hariri.

Since May 2014, when President Michel Suleiman left office at the end of his tenure, Lebanese political factions have repeatedly failed to reach a consensus over who should be the country’s new president. Geagea was March 14’s candidate and Aoun, March 8’s. Hezbollah, the dominant faction in the March 8 coalition, has boycotted elections, insisting on several occasions that betting on a president “lacking a clear vision for confronting the threats that are facing the country will make us lose our entire homeland, even if that happens in a constitutional manner.”

To Hezbollah, Aoun is the only candidate with a clear vision. Nasrallah has expressed this position on several occasions and in interviews; he reiterated this position in his Jan. 29 speech.

“When the presidential issue started, Hezbollah mulled its choices and we unanimously agreed that Gen. Aoun is naturally a candidate who enjoys the needed characteristics. Based on these characteristics and our political vision, and out of loyalty to Gen. Aoun's stances, we decided to back this nomination and we discussed the issue with the allies,” Nasrallah said in his speech. The allies Nasrallah might have meant are March 8 inside Lebanon, and Iran and Syria in the region.

But why is Hezbollah still supporting Aoun after the nomination of Franjieh?

Many are asking this question. There was speculation that since Franjieh is also a close ally and can calm Hezbollah’s concerns, he might be able to convince Hezbollah to support him. Franjieh visited Nasrallah on Dec. 10 and discussed his candidacy, asking Nasrallah how long Hezbollah would continue to support Aoun.

In his Jan. 29 speech, Nasrallah clarified his party’s position on Franjieh's nomination, recalling what he told Franjieh in that meeting: “When [Franjieh] told us about the [secret Nov. 17] Paris meeting [with Hariri], we asked him to be cautious because certain parties might seek to sow discord between him and Aoun, or between Hezbollah and Aoun," Nasrallah said. "When Franjieh asked about our camp's response — if the proposal was serious — we told him that that would be a new development that we would have to discuss with Gen. Aoun.”

Nasrallah elaborated, “We told him that we trust him and that we believe he has the needed characteristics, while noting that we are politically and morally committed to Aoun's nomination and that the issue needs to be discussed with [Aoun].”

Yet many observers believe Lebanon's protracted electoral process is, in part, a product of the conflict between Iran and Saudi Arabia. Hezbollah’s opponents accuse the party of serving an Iranian agenda that aims to disrupt everything in the country, “not to just [veto] a name or a candidate, but to prevent the election of a president in Lebanon,” parliament member Ammar Houri of the Future Movement said in a Jan. 7 interview with Lebanon Files, a local news website.

That point of view sees Iran attempting to pressure Saudi Arabia by every means possible. Nasrallah responded to these allegations in the Jan. 29 speech, saying, "Iran, the powerful country in this region, does not need the issue of Lebanon's presidential vote to solve its nuclear program.”

Nasrallah added, "If Iran wants to hinder the presidential elections in Lebanon, then it should have utilized this issue in its international relations."

He explained why Hezbollah is committed to Aoun’s candidacy, stating that the group’s alliances “are not only based on political interests, but also on trust and friendship.”

Hezbollah believes there is a moral commitment to Aoun, not only because Hezbollah told him this when he announced his candidacy, but because of Aoun's position on the 2006 war with Israel. Back then, Nasrallah said that Aoun’s support is “a debt until judgment day.” And later, Aoun stood firmly by Hezbollah during its internal crisis, the 2007-2008 anti-government demonstrations, and then when Hezbollah decided to intervene militarily inside Beirut in 2008, to block the government’s decision to dismantle the group’s telecommunication network and remove the Beirut airport’s security chief. But the main milestone that tightened the bond was the Aoun position on the war in Syria.

Aoun’s speeches and public appearances during 2013 gave Hezbollah’s intervention in Syria a much-needed Christian umbrella. “The border stretching from Arsal to Akkar was abandoned, leading to Syrian rebels crossing in and from Lebanon,” Aoun said in a July 2013 speech, adding, “This almost led to a civil war between residents of Arsal and Hermel. Hezbollah then was forced to interfere in Syria and put an end to all this.”

The stance became stronger and stronger with Aoun’s media machine highlighting the threats of the rebels in Syria on Christians; this involved news, documentaries, talk shows and even comedy.

It is true that Franjieh himself took the same approach regarding the Syrian war, even stronger sometimes, given his strong ties with Assad, yet Franjieh’s movement is domestic, as his influence is situated mainly in north Lebanon, while Aoun is a nationwide, even regional, Christian leader.

A good example that explains the difference from Hezbollah’s perspective is the Feb. 6, 2006, memorandum of understanding that was signed by Nasrallah and Aoun. Until then, the majority of Lebanese Christians had negative views of Hezbollah, even though the group had several Christian allies, including Franjieh.

After the signing, a major change occurred in Shiite-Christian relations, to the extent that some Christians now display Nasrallah’s posters at their homes. This would not have happened without Aoun, who himself became a national hero for his pro-Hezbollah stances in the eyes of many Lebanese Shiites.

Hezbollah is not giving up on Aoun, and it will always use its party's veto of any other candidate, especially now that Aoun has received the support of his main foe, Geagea. This alone — despite the hostility between Hezbollah and the Lebanese Forces party — gives Hezbollah even more reasons to stand behind Aoun, as he now has the support of the majority of the Lebanese Forces — the second most popular Christian group in the country.