Several Lebanese officials and delegations, including rivals of the kingdom, have visited Saudi Arabia to pay their condolences for the death of the Saudi king, possibly heralding new breakthroughs in the Lebanese crises. 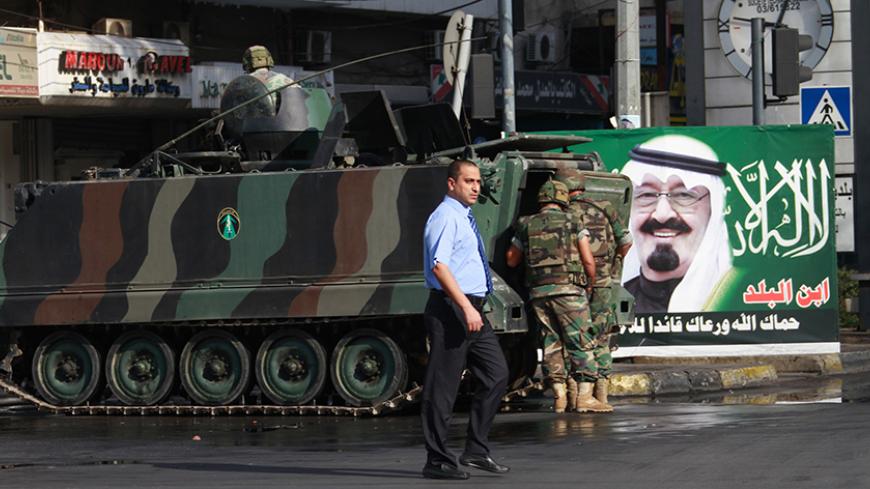 A man walks past a poster of King Abdullah of Saudi Arabia, as Lebanese soldiers patrol a street in the Sunni Muslim Bab al-Tebbaneh neighborhood, in Tripoli, northern Lebanon, Oct. 23, 2012. - REUTERS/Omar Ibrahim

Saudi Arabia is a draw these days for the Lebanese, who are keeping an eye on the names of officials and politicians visiting the kingdom to offer their condolences for the death of King Abdullah bin Abdulaziz and to congratulate the new leadership. The Lebanese are monitoring the meetings taking place on the sidelines of this occasion, marking every emerging detail, in the hopes that it will pave the way for a possible rapprochement and solution to the crisis in their country.

Ever since the start of the presidential vacancy in Lebanon on May 25, 2014, the presidential crisis has been driven by several complex foreign and domestic reasons. Saudi Arabia has always featured prominently, either as among the parties facilitating the election of a new president or as a foreign party capable of facilitating and accelerating the process.

It should be noted that Riyadh, until the death of Abdullah on Jan. 23, always had two types of relationships with Lebanon. The first is more a close alliance with former head of the Lebanese government and leader of the Sunni majority, Saad Hariri, who, along with his family, holds Saudi nationality. The second is a tense relationship with Hezbollah, the first Shiite power in Lebanon and its surroundings. At times, this tension reached the point of direct and mutual public conflicts between the two sides. Somewhere between these two types, Riyadh’s relationship with the Lebanese Christian forces oscillated between friendship and estrangement, based on the positions of these forces on Hariri or Hezbollah and the distance between them and the two sides.

According to media reports that emerged several months ago, Saudi officials were behind the prevention of a then-imminent agreement between Hariri, and the parliamentary majority Christian leader Gen. Michel Aoun. The agreement was supposed to lead to the election of Aoun as president of the republic and the appointment of Hariri as prime minister. However, the deal was halted after a series of negotiations between the two men, directly disabling the Lebanese parliament from electing a new president. In the absence of any agreement between the two and their allies, it has become impossible to secure the constitutional quorum to convene parliament in the presidential election session.

However, there has been a breakthrough over the past few weeks in Beirut: First, a dialogue between Hariri’s camp and Hezbollah started. Next, a parallel negotiation opened between Aoun and the pro-Hariri Christian camp with ties to Saudi Arabia and represented by Samir Geagea. These two dialogues are expected to pave the way for a solution to the presidential crisis, especially if these dialogues reflect a parallel regional breakthrough or a regional — namely Saudi and Iranian — desire to prevent any further deterioration of the Lebanese situation and maintain stability. This alignment would help Lebanon face the same terrorist forces that both Iran and Saudi Arabia are fighting, including the Islamic State, Jabhat al-Nusra and other terrorist groups.

It was in this atmosphere that Abdullah passed away and set the stage for potential connections, albeit within the framework of humanitarian duties or official protocols. Iran’s Foreign Minister Mohammad Javad Zarif took the initiative to visit Saudi Arabia to offer condolences. Zarif had announced he would make this visit back when Hassan Rouhani became president in June 2013, but political complications between the two countries impeded the trip.

As for Lebanon, reliable sources confirmed to Al-Monitor that Hezbollah decided not to send a delegation to Saudi Arabia as the ties between the two parties had deteriorated following a Jan. 24 interview of Hezbollah Secretary-General Hassan Nasrallah in which he criticized the Bahraini authorities for backing Riyadh.

However, the same sources told Al-Monitor that Hezbollah decided to send a high-level delegation of leaders to pay their condolences at the Saudi Embassy in Beirut. This was a remarkable step by Hezbollah, although the party claims that its humanitarian duties and political position are separate.

The most prominent move in this context has been the surprising and remarkable Jan. 26 visit by Christian leader Aoun to Saudi Arabia to offer condolences. Aoun was accompanied by the Lebanese foreign minister and the representative of his movement in the current government, Gebran Bassil.

It should be noted that this is Aoun’s first visit to Saudi Arabia since his return from exile to Lebanon in 2005. A visit by ​​Aoun to Riyadh had been repeatedly proposed as a way to help solve several Lebanese crises over the past 10 years, but the idea never materialized, a casualty of political differences.

The visit of the most prominent presidential candidate has been warmly welcomed by the Saudis, as sources confirmed to Al-Monitor that the Saudi ambassador in Beirut, Ali Asiri, had coordinated the visit. The trip comes at a remarkable time characterized by ongoing dialogues and a foreign keenness to support stability in Lebanon. This move might lead to an agreement and exceptional rapprochement between the Lebanese camps.