Turkish media ignores Yemen despite mounting civilian casualties, but hard-core Islamists and secular groups blame the neo-Ottoman government for being a pawn of Western and Saudi interests. 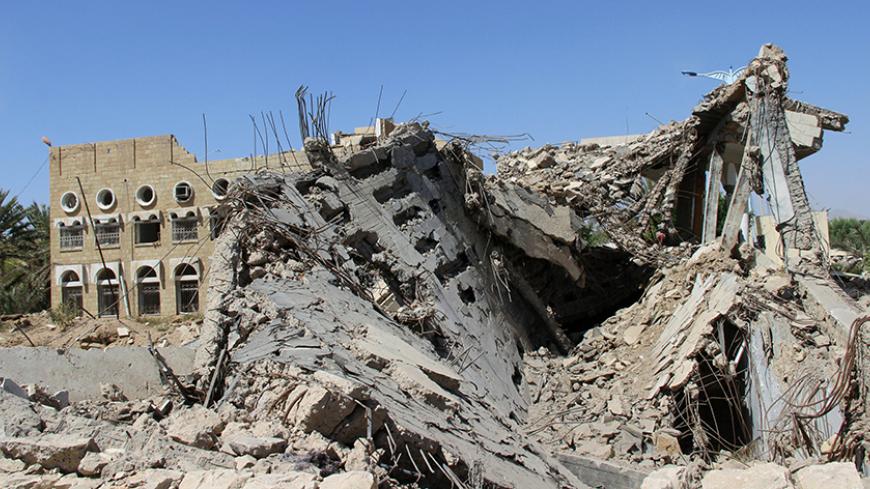 A view of a municipal building after it was destroyed by Saudi-led airstrikes in the northwestern city of Saada, Yemen, Oct. 2, 2016. - REUTERS/Naif Rahma

In the early 2000s when I started studying Yemen, no one in Turkey seemed to care about the country. Yet by 2010-11, Yemen was a hot topic. Neo-Ottomans loved Yemen, they sang songs about Yemen, they discovered the honey from Yemen, they established schools in Yemen.

One of Turkish President Recep Tayyip Erdogan’s senior advisers, Yasin Aktay, even found Kurdish Yemenis — who have oddly gone missing since his discovery — who were pro-Justice and Development Party (AKP). Hurriyet daily columnist Ertugrul Ozkok, along with others, joined in the cultural tours of Yemen guided by the Turkish ambassador at the time, investigated markets for the qat shrub and even wondered what kind of lingerie Yemeni women were wearing.

In 2012, then-Foreign Minister Ahmet Davutoglu opened offices for the Turkish Cooperation and Coordination Agency in Sanaa, Yemen. Turkish universities hosted conferences about the Yemeni uprising with several Yemeni activists as speakers, and they celebrated the centurieslong "special" friendship between Yemen and Turkey. Indeed, Turks loved Yemen so much, they allegedly even sent weapons hidden in biscuit boxes. That is what the current Turkish government — the AKP, in power since 2002 — is known for in Yemen: the weapons.

But today, Erdogan repeats Islamic State rhetoric about refusing Sykes-Picot borders and questions the legitimacy of the Lausanne Treaty of 1923, which at the time was seen as the successful ending of the Turkish War of Independence. Neo-Ottoman maps are in circulation showing several cities in northern Syria and Iraq as being within Turkey’s National Pact borders. The Turkish president and the Turkish press are silent on Yemen.

Where has all the neo-Ottoman love for Yemen gone?

Al-Monitor asked this question to a handful of Yemenis who were willing and able to comment under harsh war conditions. Among these was a Yemeni journalist and translator from Sanaa, Hussain al-Bukhaiti, who succinctly summed up the thoughts and emotions of Yemenis, saying, “There was no Turkish love for Yemen. It was Erdogan’s love for the [Sunni Islamist] Muslim Brotherhood [known in Yemen as al-Islah] after the 2011 revolution when they seized power. That is why Turkey sent guns with silencers — 'assassination guns.'"

He added, “Since the fall of al-Islah, Turkey has not only stopped its so-called help to Yemen, it has actually joined the war on Yemen. People here do not believe in Turkish love for Yemen because that idea is crazy — to love Yemen when it was a graveyard for the Turkish [Ottoman] empires. Turkey stands with Saudi Arabia in the war, and this proved there is no Turkish love. This war has killed and injured over 30,000 Yemeni civilians and destroyed everything [in Yemen]."

Indeed, in March 2015 when Saudi Arabia started its military operation in Yemen, Erdogan announced his full support for the Saudis to preserve the Yemeni government intact. He even abruptly suggested Turkey was willing to send logistics support to Yemen to “get Iran and terrorists out of Yemen.”

Ironically, the policy of expelling foreign influences and terrorists from a country goes against Erdogan’s approach in Syria, where he has adamantly backed the rebels against the regime of President Bashar al-Assad. The common factor in such contradictory Turkish foreign policy toward the Arab Spring, democratic movements, and preservation of borders and national unity is Turkey's alliance with Saudi Arabia.

One Yemeni businessman who has commercial interests in several countries spoke to Al-Monitor on condition of anonymity, saying, “Initially, we thought the Turkish bureaucrats would be able to advise the Saudi government to keep their operations limited and be vigilant against civilian deaths. Then we heard Erdogan’s unrelenting support for Saudi Arabia. He was encouraging the war. I am Sunni. I have supported the Islah movement, but now we're under invasion. Several Sunni tribes are now joining Ansar Allah [Shiite Houthi rebel movement in Yemen]. We told the Turkish bureaucrats as well, but they don't seem to care about Yemeni well-being. We now think they only listen to Saudi Arabia.”

Indeed, in re-reading opinion pieces from Turkish media during the Yemeni Arab Spring, we see that not one of their predictions and calculations for Yemen has come true. Only a few Turkish experts seem to understand Yemen at all. Yeni Safak daily’s columnist, Abdullah Muradoglu, was one of them. He warned against taking sides with Gulf countries and urged Turkey to play an independent referee role in Yemen.

Another of the few editors who understand is Alptekin Dursunoglu of Yakin Dogu Haber, who explained in his column dated April 26, 2015, that due to the propaganda Saudi Arabia and Erdogan helped spread about Yemen, now Iran — for the first time in its history — has an opportunity to be part of a deal involving Yemen. Dursunoglu referred to this as Erdogan and Saudi Arabia’s gift to Iran: Yemen.

When Al-Monitor asked Dursunoglu for his view on current Turkish policy toward Yemen, he said, “Turkey has no policy on Yemen, only dependency on Saudi Arabia. That is, whatever Saudi Arabia’s position is on Yemen, Turkey takes on that position. Because Turkey was a Saudi ally, prior to 2015 Turkey had good relations with Yemen. Now, again based on this alliance, Turkey is silent on Yemen. And this Turkish approach is not just limited to Yemen, either. There is a serious Saudi influence on Turkey’s policies toward Lebanon, Syria and Iraq."

For example, Dursunoglu said, Ankara harshly criticized the West for supporting the Egyptian military's 2013 overthrow of elected President Mohammed Morsi in Egypt, "but did not say a word to Saudi Arabia, which was indeed the most crucial backer of the coup."

As ironic as it may be, Erdogan has denounced the government of the general who led the coup, current Egyptian President Abdel Fattah al-Sisi, who actually has supported the Saudi position in Yemen. Recently, however, Egyptian-Saudi relations have declined, as Egypt voted with Russia to keep Syria's Assad in power, angering Saudi Arabia. Hence, Arab columnists started debating, given these new circumstances, whether Saudi Arabia will want to rely on Turkey even more now. To make matters more complicated, though, there is also a convincing argument that Turkey may be ditching Saudi Arabia for Iran in the near future.

Muhammet Hanefi Yagmur, a senior member of Hizb ut-Tahrir in Turkey, has a different perspective. He told Al-Monitor, “Even through Turkey has a strategic standing in the Islamic world because of its historical and geographic position, in foreign policy it follows US lines. … If the United States thought Turkish humanitarian assistance in Yemen was in its interest, the United States would have supported this kind of policy.” Yagmur firmly argued that both the United States and Britain are the cause of the Yemini people's suffering, and Turkey had to obey American wishes.

If Yagmur’s analysis can be viewed through a larger lens, we can expect Turkey to have better relations with Iran, as Ankara does with the United States, and give Saudi Arabia the cold shoulder in the near future. However, so far Saudi Arabia remains one of the few countries Erdogan has not directly criticized in public.

If we look for clues in the most recent highlights about Yemen within government circles, we see that on Sept. 9, pro-government think tank SETA (Foundation for Political, Economic and Social Research) in Ankara hosted Saudi Foreign Minister Adel al-Jubeir and reported his views on Yemen. So far, SETA has not reported any independent cost-benefit analysis for Yemen regarding Turkey's alliance with Saudi Arabia.

In February, Erdogan said, “Yemen has a special place in the Turkish people's heart.” Yet Erdogan and neo-Ottoman elites in Turkey remain silent as thousands of Yemenis die and their country is bombed down to the ground. While the majority of Turks do not receive any news on Yemen, those who can follow it suspect that the neo-Ottoman love for Yemen is over.