Despite rhetoric, Ottoman cuisine even in Istanbul sometimes fails to incorporate the multicultural aspects of its roots. 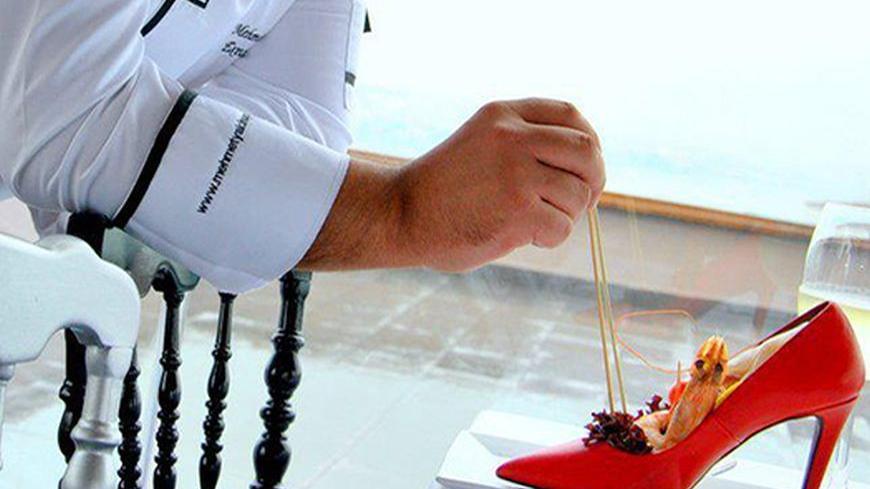 In a phone conversation, a dear friend wondered whether it would be terribly orientalist to ask if I would be interested in dining in the ambiance of an Ottoman palace over a menu titled “Aphrodisiac tastes.” It probably would have been  an inappropriate question if the person on the other end of the line had not been my 26-year-old former student, Dina, from Egypt. Diligently planning her trip from Cairo to Istanbul, Dina came across one of the most amazing restaurants, Asitane (which means Constantinople), a shining star of Ottoman cuisine in Istanbul since 1991.

No one interested in Middle Eastern or European politics could escape the term “neo-Ottoman” in the last decade. A renowned Turkish historian, Kemal Karpat, traces the concept back to 1974; Greeks apparently came up with it to indicate Turkey’s desire to be more involved in lands previously under Ottoman rule. The term has since been used to define Turkish Foreign Minister Ahmet Davutoglu’s foreign policy doctrine. Although Davutoglu relentlessly declares, “I am not a neo-Ottoman,” his name has become synonymous with neo-Ottomanism. Despite initial hopes that it would result in accomplishments, neo-Ottomanism in the last couple of years has only seen an ambiguous foreign policy strategy at best, and a failed foreign policy strategy at worst. However, the spirit of the ancestors — the Ottomans — has been felt in various aspects of life in Turkey, from music to soap operas, from fashion to perfume.

If we ask how the idea of neo-Ottomanism has affected the food scene in Turkey and globally, the initial feedback is that it has brought mixed blessings. First, it is fair to say, you can find an Ottoman Empire-inspired Turkish restaurant in several European cities as well in the Middle East. Any frequent traveler to Cairo would point you to Osmanly Restaurant, in the Kempinski Nile Hotel, and  in Doha, Qatar, many expats would concur that the best Turkish food is served at Sukar Pasha Restaurant. In many restaurants, a common point of interest is a yearning for the palace era, for upscale dining with Ottoman ambiance and a few signature dishes. The most attractive menus include a few words about one of the famous sultans, Suleiman the Magnificent, and his beloved wife, Hurrem Sultan, who are all-time favorites.

Ottoman cuisine, centered on Istanbul, first and foremost represents the tradition of fusion. It had cosmopolitan impact of several different regions from Balkans to Arabian Peninsula, from the Mediterranean to Persian cultures. However, the palace kitchens refined all these traditions and ingredients. Therefore, any credible Imperial Palace menu would have to inform the customer about the origins of its recipe. If you are ever served a dish with the commentary “Hurrem Sultan’s favorite” and the dish has tomatoes, you can be confident Hurrem never tasted that dish because tomatoes had not yet been introduced to the Old World.

One of the Ottoman palace’s hidden treasures was its kitchens, where recipes were guarded by rather secretive chefs, who arrived at the palaces from all corners of the empire. Only documents from foreign travelers’ memoirs, important celebrations like circumcision ceremonies of shahzades (princes) and analysis of documents from the palaces — now museums — give us clues about the ingredients and methods of cooking. It is a meticulous process to discover these recipes written in Ottoman — using Arabic script and Turkish, Persian and Arabic words.

The last decade of Turkish politics have been rich with the ruling AKP (Justice and Development Party) rhetoric on the greatness of “our imperial ancestors.” Turkish Prime Minister Recep Tayyip Erdogan continuously refers to the Sultan’s legacy as an inspiration. Yet, the sultans ruled a multicultural empire with tens of different languages, religious beliefs, and culinary traditions.

How much of this culinary richness is preserved and celebrated in contemporary Istanbul? Istanbul, home to 20,000 Jews — their number was more than 200,000 at the turn of the 20th century —is not an easy place to keep kosher. Sibel Pinto, author of the book The Evolution of the Sephardic Cuisine in Turkey: Five Centuries of Survival, told Al-Monitor that she knows of only two kosher restaurants in Istanbul. One is Levi’s in Eminonu, very close to the Spice Market, which has been a long-respected establishment. The other is a fairly new restaurant located in Sisli named La Casa de Barinyurt Restaurant. How neo-Ottoman can you be if different cultures are not flourishing in the imperial city?

Pinto told Al-Monitor, “It is exciting to see the renaissance of Ottoman Palace recipes, from sherbets to desserts, pilafs, especially meat dishes with dried fruits and nuts. Long-forgotten tastes are remembered.” Pinto added that Turkish cuisine now utilizes a wider variety of ingredients from all over Anatolia.

However, world-renowned chef Mehmet Yalcinkaya, who specializes in fusion and modern Turkish cuisine, had a different perspective. Yalcinkaya told Al-Monitor, “Traditional recipes of our cuisine require lengthy preparation, and it is rather challenging to market the food to the world audiences. Can Turkish food in the international arena go beyond kebabs and baklava?” Yalcinkaya rightfully acknowledges the rising demand for Turkish and Ottoman cuisine all around the world as the Turkish presence in the international sphere expands; however he is also well aware of the challenges Turkish cuisine faces in standardization and marketing to different audiences’ palates.

Ottoman cuisine gained a precious reputation, not only because of the fusion of a variety of ingredients into gourmet dishes but also because of the fusion of a variety of cooking methods into a rich culinary tradition. Efe Moral, a journalist and a serious gourmet of Greek and Aegean cuisine, told Al-Monitor, “Anatolian traditional cuisine has numerous hidden gems and Turkish cuisine would only be serious if it welcomed influences from the Balkans to the Aegean to the Middle East. But it has its own troubles nonetheless. Its cooking traditions and presentation should undergo a serious fundamental revision if it’s going to claim its rightful place in world cuisine.” Moral summarized the current market of Ottoman cuisine in Turkey: “There are increasing numbers of restaurants that claim to serve Ottoman food in Turkey. But they are nothing more than restaurants which do not serve alcohol, and imitations of traditional restaurants like Haci Abdullah in Istanbul with a modern setting. Ottoman cuisine is not researched enough and a few recipes are circulated over and over again for promotional purposes.”

Serious establishments such as Asitane Restaurant in Istanbul are few, and even they could only recover 200 recipes from 600 years of Ottoman history. For now, you can get a taste of the Ottoman world if you are visiting Topkapi Palace with a refreshing tamarind sherbet. However, you cannot find tamarind on the market; only a few traditional patisseries serve this drink. It is sodas and juice boxes that dominate the Turkish market. For those of us familiar with the neo-Ottoman turn Turkish foreign policy has taken in the last decade, there are sad similarities between the trends of neo-Ottoman cuisine and foreign policy: Both generate interest and chatter, and both fail to deliver substantial marketable results. I cannot make predictions for foreign policy, but I do hope neo-Ottoman cuisine will go back to its roots of “fusion.”