Once looked down on as bland and basic, Black Sea cuisine flourishes in Istanbul as a nutritional and exotic option. 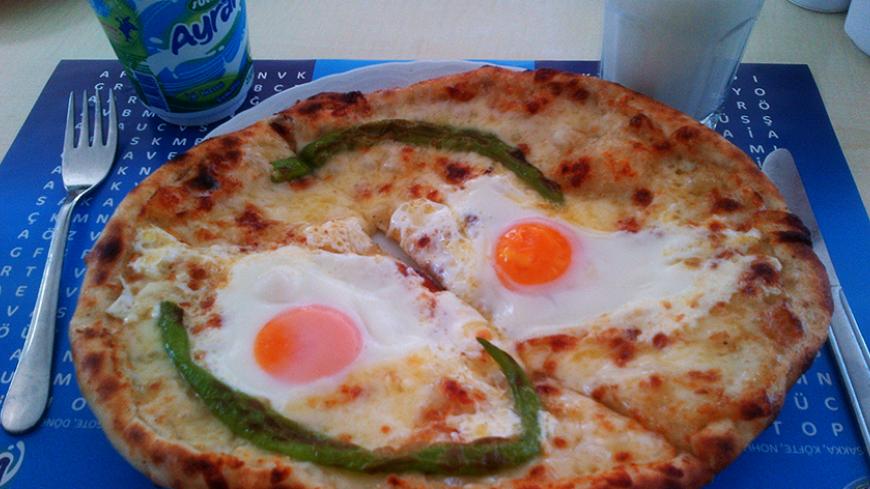 Karadeniz pide is a common dish from the Black Sea region of Turkey, July 1, 2014. - Wikimedia Commons/E4024

As Erdoganmania loses pace, Al-Monitor asked over the course of four weeks in July and August more than 200 people from Ankara and Istanbul what would be the most memorable legacy of President Recep Tayyip Erdogan. Most answers were about politics, yet a significant number of those informally surveyed suggested the spread of “Black Sea culture and cuisine” as the most pleasant legacy of Erdogan.

Although born and raised in Istanbul, Erdogan’s ancestral roots are in Rize, a northeastern province on the Black Sea coast. The region with steep mountains receives high levels of rain and has limited fertile land that can be cultivated.

This has led to emigration. Yet until the last decade, there were only a few restaurants specializing in Black Sea dishes in Istanbul despite the heavy population of Black Sea emigrants. Almost all of these Black Sea restaurants were offering Akcaabat Kofte (meatballs from the town of Akcaabat) or Karadeniz pide (a calzone-like dish with cheese, meat or a combination of both). Although pide and kebabs are still popular, international kitchens (Chinese, Japanese, Indian restaurants can be easily found) and domestic regional cuisines — sometimes known as the kitchens of the Ottoman Empire — are mushrooming all around Istanbul. The trend started in the late 1990s with Greek Aegean cuisine; then we observed southeastern (Kurdish) meals and desserts taking over the city. Now, the latest craze is more of “home-cooked” meals served in fine-dining restaurants with regional themes. Hence, Black Sea music, sitcoms featuring families with Laz accents running home to cook, catering businesses and eateries are fashionable.

Why did it take so long for Black Sea migrants to open up restaurants with their home-cooked meals? Serhan Can, a baker from the Camlihemsin region of Rize, told Al-Monitor, “In this area, there are two prominent ethnic groups: the Hemsin and Laz peoples. There are others as well, Turks, Georgians, Circassians, but the Hemsin and Laz peoples are the most prominent. The Hemsin people are known for their skills with pastry. They have been trained in Russia and stand out in this business. So almost all the first pastry shops opened in any major city in Turkey are from Hemsin. However, they did not announce themselves as Hemsinli. Today, we see bakeries from Rize, Trabzon and others in Istanbul. But Black Sea pastries were in the mainstream and in the upscale Turkish dining scene already for decades.”

Today, many of the Black Sea region’s restaurants brag about serving bread made on the premises. Black Sea cooking is simple, yet diverse. Because the Hemsin and Laz peoples spoke different languages for centuries, even the staple meals are known by different names. There are a handful of local basic ingredients: hazelnuts, anchovies, corn, kale, collard greens, berries and green beans. The region also prides itself with its grass-fed cows and dairy products. Almost every recipe is made with derivatives of these basic ingredients. The Black Sea coast is also home to one of the world’s richest ecosystems. Frequent rains and constant mist allow rare herbs to grow in abundance. A rich variety of wild mushrooms are among the delicacies locals enjoy.

Today, Black Sea restaurants are so popular in Istanbul that they have become chains. Fasuli operates five branches in Istanbul. Its walls, like those in Italian restaurants or in diners in the United States, are decorated with photos of famous people who are frequent customers. You can see Erdogan in the VIP Gold room and his ministers in a VIP photo on their webpage as well. Employing young family members, Fasuli serves a basic menu. Its most popular item is fasulye, white bean stew. It is slow cooked, preferably in clay pots over wood fire. But the most important ingredient is the beans; they must be from the Ispir region of Erzurum. Ispir beans are quite small, easy to cook and have a natural sweet taste. Ali, one of the frequent visitors to the Tophane branch of Fasuli, told Al-Monitor, “I am a businessman from Izmir. I was not interested in Black Sea cuisine. I started coming here with bureaucrats to talk about business deals. But now I cannot eat beans anywhere else.”

Esra Husrev, one of the third-generation owners of the famous Husrev Restaurant, told Al-Monitor, “What differentiates us from other Black Sea restaurants is that we started our services in 1928.” Indeed, today Husrev has three outlets — the original one in Cayeli, Rize; one in Ankara; and one in Istanbul. Their braised meat, kavurma, is a delight for all meat lovers. The secret is fresh meat and wood-burning ovens proctored by patient chefs. Husrev explains that their establishment has become a brand name that promises a high standard. She also told Al-Monitor that they plan to franchise at the domestic and international levels. Husrev said, “We purchase our ingredients wherever we can find the best quality. We always have our dairy products delivered daily from Trabzon.” Husrev is also popular among bureaucrats and politicians. Most restaurants frequented by politicians do not serve any kind of alcohol, nor do they allow you to bring in a bottle.

Yet the beans and braised meat, just like Black Sea pide, cannot do justice to the richness of the cuisine. There are basic simple dishes, which you can find in every household. One is a cheese fondue, cooked with corn flour and butter. It is known as muhlama in Rize, but kuymak in Trabzon. Hazelnuts, spread throughout the world by Nutella, not only decorate the Hamsikoy region’s famous rice puddings but also are served as a sauce to homemade pasta and as the main ingredient of hazelnut soup. Hazelnut halva is a regional specialty, as well. You may not see it on the menu, but if you ask, the kitchen may have it for special customers — those seeking a taste of home.

But the real miracle of Black Sea cooking comes from hamsi — anchovies. They are eaten for all courses. Hamsikoli, thick dense bread made with hamsi, is sold in slices in Rize bakeries, but good luck finding it in neighboring Trabzon. Home cooks have produced all kinds of creations with anchovies, shaped in the form of birds (hamsikusu), pan fried or cooked with rice (hamsi pilaf).

And the proof that Black Sea dining is now not only accepted but also cherished is seen in upscale dining and fusion restaurants, which are branching out with their Black Sea cuisine. For upscale dining, one of the best locations is Hamsili. Previously known by its original franchise name from the Black Sea city of Ordu, Vonali Celal, the restaurant caters to people with sophisticated taste buds. It has a detailed menu with fresh ingredients shipped daily from the region. Their pickles (beans, various other vegetables and fruits, some of them served warm) and Black Sea specialty greens are particularly noteworthy. On any given day, you can easily find six or seven varieties of anchovy dishes. You can also enjoy taste a wide number of dishes from various Black Sea towns and sample the diversity of the region.

Klemuri, a restaurant in the heart of the touristy Beyoglu district, is run by two young women. Klemuri, like Hamsili, is among the few Black Sea restaurants that serve alcohol. Klemuri’s most pleasant surprise is black grape pudding (pepechura), sold under the name “termuri.” It is a popular Greek dessert known as moustalevria. The Black Sea region is home to a variety of wild berries and grapes with a thin skin and intoxicating fragrance. When crushed and strained, these grapes produce a refreshingly light dessert when combined with a little sugar and cornstarch. Klemuri, rising up on its Black Sea roots, also generates seasonal fusion dishes.

Thus, Black Sea cuisine, which was unknown to most people in Turkey, has gained popularity during the Erdogan era. However, it will likely spread in the post-Erdogan era, as it provides diverse, healthy and versatile options. Kahraman Cehreli, a seasoned chef from Trabzon, told Al-Monitor, the “local Black Sea kitchen is one of the healthiest in Turkey. First, it is based on the sea, with anchovies. Then, the dairy — butter, cheese and milk — all fresh and locally produced. Next are the greens and vegetables you harvest from your own garden, and corn for bread.” Indeed, there are only a few simple carbs in traditional Black Sea cooking and it could qualify as a model for the latest global craze — the Paleo Diet.