Gaziantep province has been recognized by UNESCO and the European Union for its culinary excellence and hopes to become a center for gastronomy tourism in Turkey. 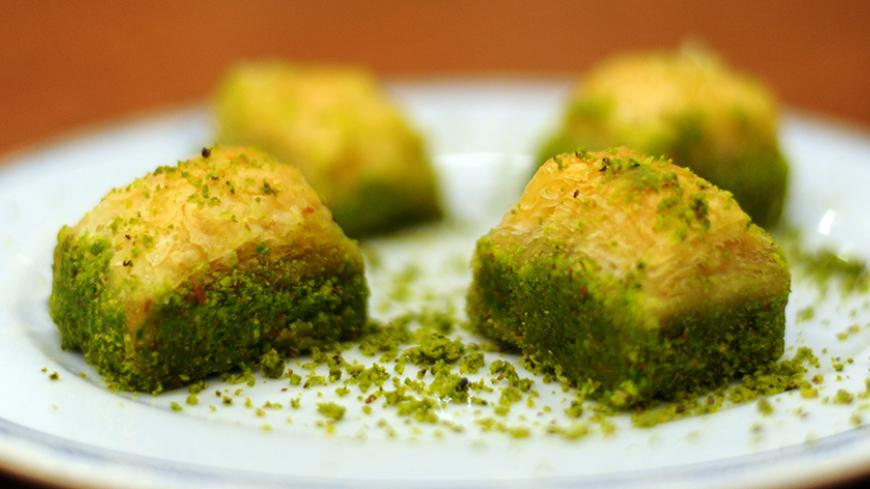 Baklava, now found at well-stocked grocery stores in the United States and Europe, is a must-have for Christmas and other festivities in the Middle East. But where can you taste it at its best? The kind that is flaky yet melts in your mouth, the kind that does not overwhelm with its sweetness, the kind that has enticing flavors to awaken all your senses? The kind that never uses honey or any other kind of nut but pistachios, mesmerizing with its 30-35 hand-rolled layers of dough, purified butter sprayed across each layer no heavier than an ant’s feet?

Culinary experts agree that Gaziantep produces the finest examples of Turkish sweets, and baklava is only one of the tantalizing tastes of Gaziantep. There are the sobiyet, havuc dilimi, bulbul yuvasi, fistikli dolama and kare baklava, just to name a few types, all made with almost exactly the same ingredients by the city's baklava masters, producing an orgasmic culinary experience with each version of the desserts.

On Dec. 11, UNESCO Director-General Irina Bokova announced the inclusion of Gaziantep in the UNESCO Creative Cities network, in the field of gastronomy. The recognition is based upon the cities’ use of “creativity as a strategic factor for sustainable development.” On Dec. 18, the news broke that Gaziantep has also been recognized as one of the European Destinations of Excellence in 2015. This year's theme is tourism and local gastronomy.

Everyone involved in the two competitions praised the determination of Mayor Fatma Sahin and her team. Sahin explained that the process took over 20 months of professional preparation.

Al-Monitor spoke with prominent Turkish chefs, local food historians as well as Antep Municipality, asking them what makes their cuisine special. They cited three major factors. First, Gaziantep is located in the cradle of early civilizations and trade routes known as the Fertile Crescent. They credited the city with over 350 original recipes. Second, it has spurned modernization efforts by preserving its world-famous pistachio trees and farming methods, staying true to local ingredients. Third, Gaziantep's highly specialized artisans loyally and stubbornly insist on traditional pottery and cooking methods.

Gultekin Serdar Tolay, a senior official with Gaziantep Municipality, told Al-Monitor, “I believe what sets the Antep kitchen apart from others is the fact that it is a fusion of centuries-old diverse cultures and different spices. It has a very rich repertoire of dishes because of the different cooking methods and tools utilized.” For example, the Antep pistachio is the main ingredient in not only hundreds of desserts (including ice cream, pastries, baklava and marzipan-like pastes) but also in kebabs, mezes and even drinks. The quest for preservation has produced incredible new foods, such as pomegranate molasses, sun-dried fruits and vegetables, jams, teas, sherbets, soup mixes and pickles.

Unsurprisingly, the one and only Culinary Museum of Turkey, Emine Gogus, is located in Gaziantep and showcases the influences of different civilizations over 5,000 years of history.

Food is interwoven through the traditions and folklore of Antep. The times of day and special events are marked by different foods. For example, there is yuvalama, a labor-intensive dish that requires making meatballs with ground rice the size of peas, and garbanzo beans and yogurt traditionally served at the end of the holy month of Ramadan. Meyankoku (licorice) sherbet is served free on the streets during the evenings of Ramadan. Katmer, a crunchy pancake that has become popular all over Turkey in the last decade, was traditionally a breakfast item in Antep. A thin layer of freshly rolled dough is filled with crushed pistachios and clotted cream baked over wood fire.

Gonca Tokuz, a local food historian who has written multiple books on the tastes of Antep, told Al-Monitor, “For centuries katmer was served as a post-wedding dish. Up until the 1970s, the groom’s family would send it over to the bride’s family the morning after the wedding as a sign of gratitude for their daughter’s purity.” It is also a special treat for the newlyweds to eat during their honeymoon, leading to the common joke, “What did you do to deserve the katmer?”

Antep is also a city of resilient traditions. World-renowned chef Mehmet Yalcinkaya, who is fond of Antep cuisine, told Al-Monitor, “In Antep, cooking is specialized. If you want to eat meatballs, you go to a place that serves kofte. The dessert shop will provide you with dozens of different types of baklava, but that's it. Also, all foods are served during specific times. You can set your watch by the service times. For example, beyran is a soup eaten for breakfast. After 10 a.m., you cannot find any place serving beyran.”

Indeed, the city’s astonishing culinary traditions can be seen in the roles assumed by different culinary professions. For example, butchers rarely get orders for specific cuts and need not display various cuts of meat on their windows. That is, customers rarely come and ask for lamb shoulder. Rather, they would give the name of the dish they're preparing and the butcher would prepare the meat.

Butchers are usually located right next to bakeries. So you may call your butcher and tell them you need loquat kebab, a kebab prepared with minced lamb meat stuffed into sweet loquat fruits. The butcher will prepare the lamb meat for the kebab. To make ground meat, Gaziantep butchers and home cooks alike use a traditional machete-like knife called a zirh, never a machine. Then they mix the ground meat with spices and herbs and fill the loquats on a tray. In 15 minutes or less, the butcher’s assistant will take the tray next door to the bakery for the kebab to be cooked in a wood-burning oven over 40 minutes. That is the way one orders takeout in Gaziantep.

Yalcinkaya told Al-Monitor, “Each bakery or restaurant has its own suppliers. They work with the same suppliers for decades. For example, baklava producers buy the goat’s milk to make their own clotted cream. The pistachios must be picked before they are fully mature for baklava.” Baklava has few ingredients and all must be of the best quality; otherwise it is not worth investing the labor in producing such an intricate delicacy.

It is not only the relationship between suppliers and cooks that make Antep cuisine incredible, but also the resilience of the chefs against modern ways of cooking. Yalcinkaya shared an anecdote with Al-Monitor: “A decade or so ago, the minister of tourism told the baklava masters in Antep a new regulation would ban aluminum trays and require steel ones for health reasons. One elderly chef replied, 'So we will be banning baklava in Gaziantep, then.' That was because with steel trays, baklava is not evenly cooked. At the end, the baklava masters won.” This precision is why even small restaurants in Antep still use clay pots, copper boilers and plates to cook and serve their food. Modern conveniences have not changed Gaziantep, and this has helped preserve the special tastes of slow-food traditions.

Yalcinkaya, who is one of the pioneers of fusion cuisine in Turkey, observes that Antep’s diversity could be seen as an early example of fusion cooking. It brings together vegetables, fruits and nuts with meat, spices, legumes and yogurt, producing exquisite tastes. In his Aegean restaurant in Istanbul, Yalcinkaya reinvents traditional Antep tastes with different ingredients, such as shrimp Alinazik kebab, a roasted eggplant delicacy traditionally served with lamb.

Antep is also famous for its coffee houses. The menengic (turpentine) coffee is a popular specialty of the city. It is a misnomer; menengic coffee is a caffeine-free drink made from wild pistachio seeds. It resembles Turkish coffee and is cherished as an aphrodisiac along with other health benefits.

What grows together goes together in Antep, where cuisine combines ingredients in surprising ways, creating a festival of color, scent and taste. A common saying among food aficionados in Turkey goes, “Whoever is truly passionate about food will one day visit Antep.” Now the city hopes this message will resonate among global food adventurers.