Despite the opulent dinners making the headlines, Turkey's traditional Ramadan foods and rituals are simple, nutritious and versatile. 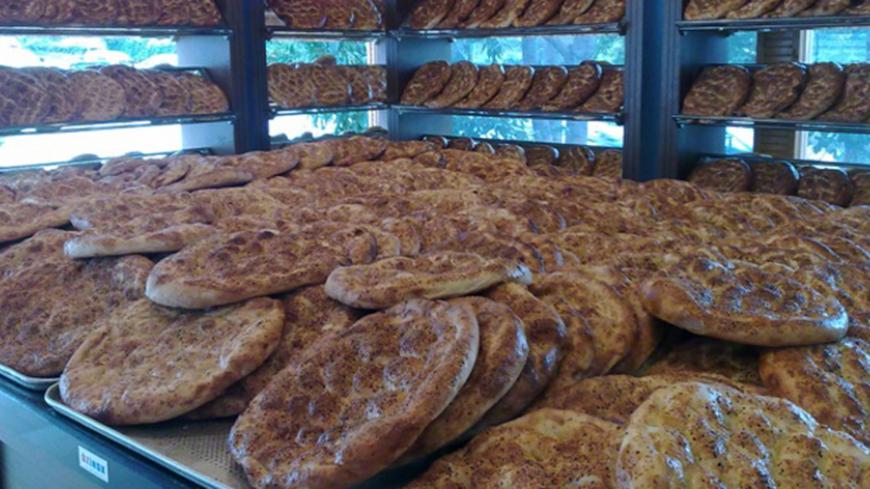 The shelves of a bakery are stocked almost exclusively with pide during Ramadan in Turkey, Sept. 7, 2010. - Flickr.com/pocketcultures

For most Turks, especially youngsters, Ramadan means joy and wonderful, special dishes. Mothers tell children Ramadan will arrive 10 days earlier the next year if they behave properly. Following the lunar calendar, Ramadan does not have a set season and actually moves 10 to 11 days each year, so the traditions of Ramadan food change in each region of the Muslim world with the availability of seasonal products in different climates.

In Turkey, almost every city has its own Ramadan specialties for the main course, but there are unique features to observe only during this holy month wherever you travel in the country. On the first night of Ramadan, if you are near a mosque, you will see worshipers rushing for nighttime prayers and you may observe the "mahya," a lighted banner hung between two minarets of a mosque that welcomes Ramadan. The tradition of the mahya dates back to the early 1600s. Decorated with bright and high-tech lights in bigger modern mosques, they are unmissable.

On the next day, you will most likely observe that your local bakery is closed. Bread makers, who traditionally work in the wee hours of the morning, will have to wait for the late afternoon. Just before sunset, at the time for iftar, you may observe people lining up in front of the bakeries to purchase the special Ramadan bread called "pide." Although in English the bread is known as "pita," Turkish pide is different from regular unleavened flat pita bread. Rather, it resembles the Armenian bread "matnakash" and is made from wheat flour and yeast. It rises but does not puff, as the master bakers make fine designs with knives or fingers on the round dough to make little pockets. After this point, in its simplest and the most common form, the pide is baked in the oven and then sold, ideally steaming hot with a paper wrapping to protect the customer's fingers. One of the most pleasant memories of a childhood in Turkey might be nibbling on piping hot pide while bringing it home for iftar. In residential neighborhoods, you can still witness this pleasant scene, as small children are not required to fast.

There are also fancier forms of pide, if you are willing to pay a little more. A baker may add eggs and sesame seeds for an extra charge. Pide is versatile, depending on the region and the creativity of the patisserie. Cheese, meat, dates and sugar are all frequently used to decorate the pide.

Nothing symbolizes Ramadan stronger than pide in Turkey, so much so that every town has a recipe of homemade kebab utilizing the day-old pide that no one enjoys eating. So not to let the stale pide go to waste, cooks generate a colorful array of main courses in which pide is usually soaked in the drippings of meat or broth and seasoned with onions, carrots, seasonal vegetables and perhaps yogurt. Prominent chef Omur Akkor, the author of several books on Seljuk and Ottoman Era cuisine, shared a special recipe with Al-Monitor. Akkor highlighted that it is in the hadith not to waste food, so his recipe calls for diced stale pide sautéed with butter and tomatoes over medium heat. Then it's topped with strained thick yogurt and browned ground beef with spices. Akkor has a delightful cooking show during Ramadan on which he shares stories from the Seljuk and Ottoman Palace kitchens. 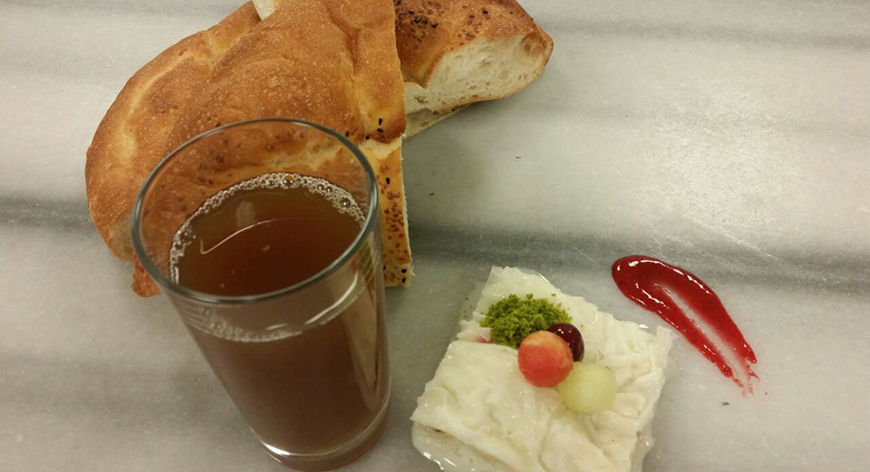 A traditional Turkish Ramadan meal of gullac, pide and tamarind sherbet from the Ouzo Roof Restaurant in Istanbul, June 26, 2015. (photo by Pinar Tremblay)

As Akkor told Al-Monitor, for Muslims, Ramadan starts weeks before the first day of fasting. Depending upon the season, (for example, right now the fasting period is about 17 hours a day in Turkey) fasting while running daily errands could be rather challenging. Therefore, most households go on a shopping spree to stocking up on groceries before Ramadan starts.

Ramadan is a time to focus on prayer and self-reflection as well as sharing with those less fortunate. Generous and anonymous donations are also a Ramadan ritual. For example, in neighborhoods where credit cards and supermarkets are not available, local stores still keep notebooks of monthly debts for financially struggling families. A richer neighbor may pay the store keeper, erasing the debt of the families facing the most hardships. The donor does not know the names of those he helped, and those whose debts are paid would not know the donor’s identity. In urban neighborhoods, major grocery stores prepare “Ramadan boxes” of kitchen staples. Donors may give a sum of money to different charities that in return distribute these boxes to poor neighborhoods right before Ramadan.

That said, rich or poor, each household tries to prepare the best meals for Ramadan. It is rare to hear a devout Muslim complain about hunger, yet hydration is a serious concern, particularly in summer. The panacea offered is another centuries-old Ramadan tradition called "sherbet" and "hoshaf." Sherbet is a refreshing and healthier alternative to soda. Almost any fruit, again depending on region and season, and several herbs can be turned into a sherbet, which can conveniently be prepared in advance. Fruits or herbs are boiled with sugar and spices and strained to serve with or without ice. The most popular are made from rose, apple and tamarind.

Hoshaf is made from cooking different kinds of dried fruits, such as raisins, apricots and cranberries, with sugar and spices with a good amount of water. Once the fruits are soft and swollen, they are taken off the heat and served cold or at room temperature. This is rather creative creation, using a high density food item such as dried fruit with all its nutrients and fiber. As long as the sugar is kept low, hoshaf and sherbet are healthy refreshments essential to curbing hydration.

Hoshaf, sherbet and pide are consumed at both iftar and sahur throughout the holy month. It is customary to distribute a bowl of hoshaf to neighbors right before iftar as well. In the month of sacrifice and giving alms, most cooks try to have light and ready-to-serve desserts on their menus. The quintessential Ramadan delicacy is gullac. Similar to Egyptian umm ali, the Turkish version of the dessert means “meal with roses.” The dry sheets of gullac dough, made with corn starch and wheat flour, appear in grocery stores a week before Ramadan. They are thin and almost transparent. To make the dessert they are soaked in a mixture of lukewarm milk and sugar, and preferably also sprinkles of rosewater. During the layering process, different spices and nut mixtures can be added. Traditionally, mastic, pomegranates, walnuts, almonds, pistachios and cinnamon are used to decorate. Easy to prepare and store, gullac is a light dessert that can be digested easily.

World-renowned chef Mehmet Yalcinkaya told Al-Monitor that traditional Ramadan foods such as pide, hoshaf, sherbet and gullac are nutritious yet simple and versatile, adopting to one’s budget and seasonal ingredients.

These foods also symbolize the spirit of Ramadan, a festive month of caring and sharing with others. Although we may be mesmerized by the opulent iftar parties in upscale neighborhoods usually hosted by major businesses, the spirit of Ramadan calls for keeping it simple and breaking bread with several people and helping them in any possible way. After all, the essence of the holy month is not about deprivation, but attaining "taqwa," or piety.