From masked drummers to online pide contests, Turks are bringing new twists to Ramadan in the coronavirus era. 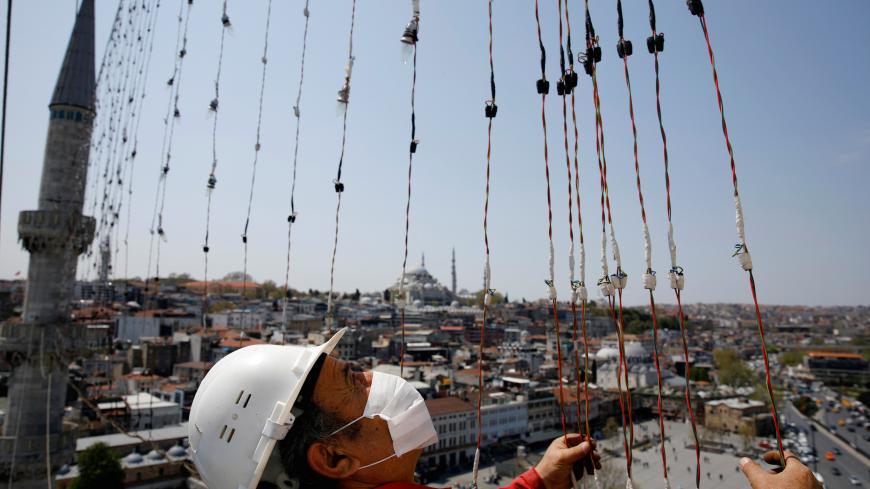 Mahya master Ramazan Kizilkaya takes part in the installation of the mahya at the top of one of the minarets of Yeni New mosque, as the outbreak of the novel coronavirus continues in Istanbul, Turkey, April 27, 2020. - REUTERS/Umit Bektas

Dressed in Ottoman-era attire complete with a surgical mask, Sufi singer Eren Cosan wakes people up with his drum in the early hours for "sahur" — the last meal before a day of fasting that begins before sunrise. But unlike most Ramadan drummers who simply pound on the drum, Cosan sings traditional Sufi songs whose lyrics are very much in tune with the woes of a Ramadan amid the COVID-19 pandemic.

A short clip that showed Cosan singing “Give me a remedy, my sultan” went viral May 10, reaching nearly a million viewers through Twitter and news sites. Cosan, a self-taught singer, and another musician, Umit Turker, were filmed from a balcony on a street in Mamak, an Ankara neighborhood that has been a traditional stronghold of the ruling Justice and Development Party.

His newfound fame caught Cosan by surprise. “I was not even aware that we were filmed, let alone that the clip became viral, until the next day,” he told Al-Monitor. He took the job of Ramadan drummer because he needed money. “Normally, our Sufi band does very well this time of the year because we perform at wedding ceremonies and Ramadan concerts. But all collective activities shivered down due to the coronavirus,” he said, adding that the municipality paid drummers 100 Turkish liras ($14) a day.

The Ramadan drummers are normally paid in tips from the locals. But the Interior Ministry banned them from going door-to-door to collect tips as part of measures against the pandemic, which has caused nearly 4,000 deaths in Turkey. Therefore, local authorities decided to pay Ramadan drummers a daily fee, particularly after some of them said they would go on strike if they were not allowed to collect tips.

Yet the public still finds ways to help the drummers. “People who want to tip do it now by placing it in a basket they lower from their balconies,” Mehmet Selçik, a drummer in Istanbul’s Zeytinburnu district, told the semi-official Anadolu news agency.

“This Ramadan is different,” Cosan, who describes himself as a firm believer, told Al-Monitor. “This year, God has shown us how very vulnerable we are, with just one invisible virus bringing all people, including the mighty and the vain, to their knees. Mankind has been arrogant and aggressive, inflicting harm on nature, animals and weaker beings such as women and children. We now need to rediscover our spirituality and show solidarity and compassion for each other.”

In Turkey, a country with more than 80 million residents, people’s approaches to Ramadan differ widely, depending on their level of piety or socio-economic class. The Islamic holy month may be rather low-key in some Westernized and wealthy neighborhoods in big cities such as Istanbul, Ankara or Izmir, except for special puppet theaters for children in chic malls or posh iftars, the post-sunset meal, at five-star hotels. In more conservative Anatolian towns, people observe the rites meticulously, often closing down restaurants during the day and even harassing people who eat, drink, smoke or consume alcohol in public while others fast.

“Ever since the 1990s, Ramadan has been highly commercialized in Turkey,” Mustafa Sen, an associate professor of sociology at Ankara’s Middle East Technical University (METU), told Al-Monitor. “It has been about Ramadan packs in markets, commercials for family-size soft drinks on television and rich fast-breaking menus. The confinement caused by the pandemic has put an end to all the trimmings and show-off aspects of Ramadan this year, but it would be difficult to say whether these changes, caused by a very unique and particular situation, will endure.”

This year, the traditional Ramadan tents, organized by political parties and municipalities to offer meals to the poor, were banned. Bakeries were required to bake the pide, the traditional flat bread topped with black sesame seeds, earlier in the day to prevent long queues at sunset. Online, the bread-baking craze has been replaced by people who bake pides at home and post photos.

Though some cities have reopened the traditional bazaars, Istanbul’s Grand Bazaar, which has its heyday during Ramadan, is closed until June 1 and mosques, where practicing Muslims go for tarawih — night prayers special to Ramadan — are closed until mid-June. But mahyas, messages spelled out with lights strung between the minarets of mosques, shine on, often with messages about the pandemic such as “Stay home.”

The novel coronavirus has also left its mark on the songs of the drummers. A band that roamed the streets of Istanbul on the first day of Ramadan reworded a traditional wake-up song with a reference to the pandemic: “Wake up, don’t stray, get up and pray, maybe it will keep COVID-19 away.”

Keeping the virus away means that the traditional family iftars are no longer an option. “I look forward to the Ramadan for a family iftar,” Hatice Akkan, a cleaning lady in the Aegean port city of Izmir, told Al-Monitor. “It is the only time of the year that we put aside our political differences in the extended family and enjoy a meal. But my father is over the age of 65 and my son works in a factory, so we cannot come together; it is too risky. We have video calls during the meal, though, so it feels like we are together.”

She added, “I wonder what will happen on the Eid — I would really like to go and visit my father if there is no lockdown.” Turkey celebrates Ramazan Bayrami, or Eid al-Fitr, on May 24-26 and it is yet unclear whether there will be a lockdown for the holiday.

For some academics, though the coronavirus has kept us away from family, it has brought us closer to strangers. “This year we have seen unprecedented social solidarity, which is part of the Ramadan spirit,” said Ayca Ergun, another associate professor of sociology at METU. “Starting with Ankara and Istanbul, many local authorities have paid electricity, water and utility bills of citizens unable to do so. Business people and artists stepped in to close debt accounts in corner grocers or pay the bills of people they do not know at all.”