In one of Cairo's neighborhoods, a female Ramadan drummer has taken on one of the oldest Ramadan traditions by waking up those who fast before dawn, breaking social and religious taboos. 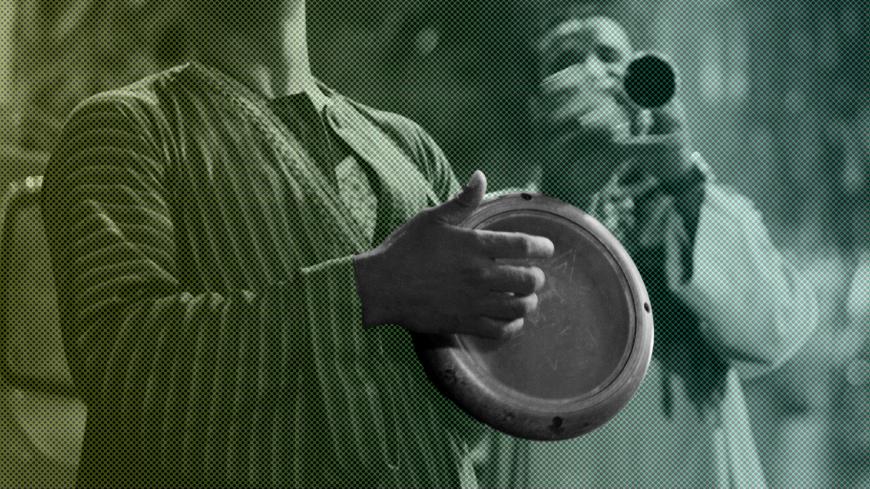 The drummer known as musaharati beats his drum and chants religious songs to wake up Muslims for the pre-dawn meal during the holy month of Ramadan, Cairo, Egypt, June 14, 2016. - MOHAMED EL-SHAHED/AFP/Getty Images

CAIRO — For many Muslims around the world, one of the most important Ramadan traditions is waking up in the early hours of the morning to the beats of a drum for suhoor, the pre-dawn meal before fasting starts.

The Ramadan drummer, or musaharati, is one of the oldest traditions during the holy month that has survived both in rural and urban areas in the Muslim world. It is no job for the weak, as the musaharati walks through the streets for hours, carrying a heavy drum, repeating religious tawshihat (hymns) and calls such as “Isha Ya Nayem” ("Wake Up, Sleepers") to the beat of the drum.

It is also an ungrateful job with no guarantee of an income. Although the musaharati works every night for a month, he must wait for the first day of Eid al-Fitr, which marks the end of fasting, to visit the houses in the neighborhoods where he worked. Most people will give money, but this is not always the case, as some will give small presents or sweets, while others give nothing at all.

None of these challenges, however, have stopped Dall Abdul Qader from becoming Egypt's first female musaharati. This is not the first time that Abdul Qader has taken on a profession mostly reserved for men. Since the age of 22, Abdul Qader has worked as an ironer, which is mostly a profession for men in Egypt. During Ramadan she continues to work this job by day and walks the streets of Cairo with her drum at night.

“I chose to be a musaharati in 2012 after the death of my brother,” Abdul Qader, 43, told Al-Monitor. “When he passed away, El Maadi [a neighborhood in southern Cairo] where we live was left without a musaharati. So I decided to take on the job.”

She said that she used to accompany her brother during Ramadan, so “when he died, my neighbors were not surprised to see me roaming the streets alone.”

Abdul Qader wanders the streets of her neighborhood, which is largely residential, from around midnight until the dawn prayers. She noted that a musaharati needs “patience, resilience, will, cleanliness, a good voice and good conduct,” in order to do a good job.

She added, “I feel sad when I see an unkempt musaharati. He harms the image of our profession.”

Abdul Qader said that it is too tiring to go out on the streets every night for a month. “I work every other night so that my voice can rest. I also drink a lot of hot beverages. It is tough, but I love my job anyway.”

Part of the reason Abdul Qader enjoys working as a musaharati is that she considers the job to be a service that benefits the community. In addition, she gives away most of her earnings to her family and other people in need.

She said that the musaharati's job is important, especially in neighborhoods with a strong sense of community and tradition and for the children who enjoy the sounds of the drum. She noted, “I cannot imagine Ramadan without lanterns, knafeh [sweet cheese dessert] or a musaharati, regardless of the changing times.”

Abdul Qader added, “When I go to upscale neighborhoods, the residents do not interact with me, especially since these areas are quiet. One resident told me not to come again under the pretext that people there do not fast and Ramadan is not celebrated.” She just ignores them.

Abdul Qader explained that she would like to see more women in this profession. “There is nothing immoral or unethical in being a female musaharati,” she said, as long as they are strong, resilient and conduct themselves well.

Egyptian women have managed to break societal stereotypes since the January 25 Revolution. Since 2011, they have excelled in jobs that in the past were reserved for men, such as butchers, carpenters and bus drivers.

Samir Abdul Fattah, a sociology and psychology professor at Ain Shams University in Cairo, told Al-Monitor that as women’s education has improved, women have been eager to take on a larger economic and social role.

“There is an increasing number of women who have become the breadwinners,” he said. “Musaharati — a seasonal job — is an opportunity for many women to make some extra money.”

Fattah said that women taking on the job of musaharatis is of social significance, because the Ramadan drummer fulfills a role that enforces the feeling of community, as they wake up those who fast for a meal that is often shared between friends, family and even neighbors. “Women [who are pioneers] are considered ambassadors in their communities and are responsible for improving the image of women. Their success shows that women have the power to take on tough jobs. If they fail, their image will be negatively affected,” he added.

Reda el-Danbouki, the director of the Women’s Center for Legal Guidance and Awareness, told Al-Monitor that women working as musaharati have a positive impact on society.

“This religious ritual implements the words of the Prophet Muhammad who said 'take the suhoor as it is a blessing.' This is a step to break taboos and traditions that Egyptians have created,” Danbouki said.

But he is also concerned about the profession being connected to religion, as extremists might use it to criticize women, interpreting Islamic teachings to ban women’s voices in public, be it as singers or musaharatis.

He argued that neither the law nor Sharia forbid women from being musaharatis. In fact, Article 53 of the Egyptian Constitution bans gender discrimination.

Danbouki noted that female musaharatis in Egypt would contribute to raising a new generation that believes in equality and in women’s rights to work in any job. “This is [one of] the first steps to empower women to take on any job, and society should accept that,” he concluded.