Amid the bad economic situation, high unemployment rates and the stifling ongoing Israeli blockade on the Gaza Strip, many Gazan women have turned to social media to market their homemade products and goods. 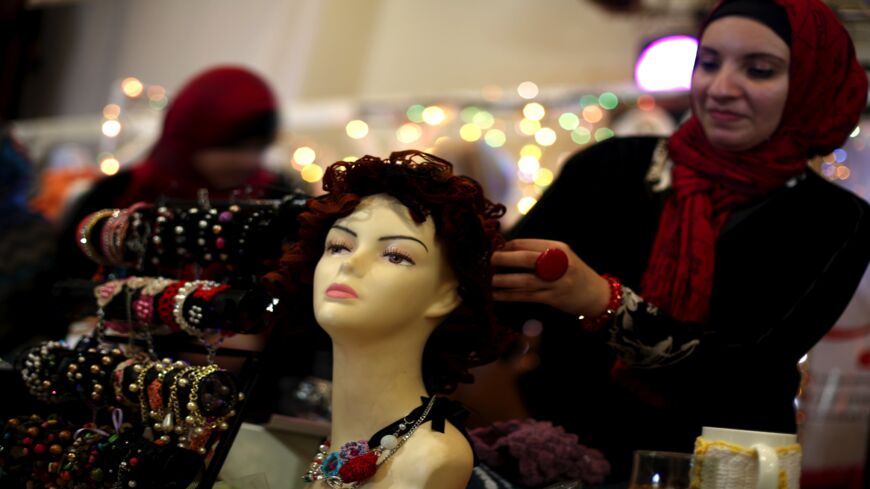 A Palestinian woman displays a mannequin wearing homemade jewelry during an exhibition entitled "Products of our women" in Gaza City on March 16, 2014. - MOHAMMED ABED/AFP via Getty Images

After more than 11 days of the Israeli war on the Gaza Strip, the hopes and aspirations of many shop owners, factories and small workshops were dashed. The shelling and incessant bombing destroyed many of them. These owners have now joined many others who have been unemployed since the siege was imposed on the Gaza Strip more than 15 years ago.

Amid the high unemployment rates and the ongoing Israeli blockade on the Gaza Strip, many women in Gaza, most notably new graduates from Palestinian universities, are trying to start their own projects, carving out their places on social media in a bid to promote their homemade products — something that has provided them with an income to make ends meet.

According to the Social Medial Report for 2020 issued by Ipoke — a Palestinian website specialized in digital studies — Facebook was at the top of the most used social media platforms among Palestinians with 92.01% of users, followed by WhatsApp with 76.81% and 63.25% for Instagram.

Like many other women, Hanan al-Madhoun, 36, who holds a bachelor’s degree in public relations from Al-Aqsa University in Gaza City, started her own home business in order to support her family of six.

Madhoun makes handicrafts in order to alleviate “the state of poverty we live in,” she told Al-Monitor.

“I decided to create and make various decorative pieces. I paint on glass. I also make small Ramadan-inspired collectibles such as lanterns and musharati figures (a person who walks in the streets at dawn during the month of Ramadan beating on drums to wake people up for suhoor, the morning meal before fasting) and small dolls, in addition to presents for weddings and celebrations,” she added.

Madhoun said she markets her products on her Instagram page, Hanan Artistary, and was “able to deliver to customers in Gaza amid the spread of the coronavirus in the coastal enclave.”

Mahdoun has turned her house into a workshop during the evening hours, while she dedicates herself to house chores and looking after her children during the day. She sells her products at prices ranging between $1 to $45, which she deems commensurate with the difficult conditions that have befallen the Gazan population of all social classes.

“I work over eight hours a day preparing and making handicrafts,” she said, stressing that her products are distinguished for their impeccable finishing and attractive designs, according to her customers’ opinion on her page. This positive feedback “gives me drive to continue doing what I am doing relentlessly,” she said.

Madhoun said “the ongoing Israeli blockade on Gaza has prevented me from delivering products to many customers in several cities of the occupied West Bank,” expressing hope that sooner rather than later “my products would reach [Palestinians] in the West Bank and the Arabs of Israel.”

The most challenging part of Madhoun’s work is the long hours of power cuts and the lack of a store where she can display her products so that her customers can take a closer look at them.

Nagham Skik, 35, from Gaza City, finds herself in the same boat. She graduated with a degree in social services from the Islamic University of Gaza with no prospects of landing a job amid the high rate of unemployment in the coastal enclave.

“When I came to terms with reality on the ground in light of the dire economic situation, I began to seriously think about establishing my own project of making sweets and pastries, wedding and birthday cakes,” she told Al-Monitor, adding that she took advantage of her drawing skills to decorate cakes with appealing “cartoon drawings.”

“My products are known for their simple homemade flavor; they are really not so different from the regular cakes prepared by other women at home, which is what made them popular among my customers who order sweets and pastries on a daily basis through my Instagram page, Honey Yum Yum,” Skik said.

In response to requests from her customers who suffer chronic diseases such as diabetes, heart issues and high blood pressure, Skik prepares sugar-free sweets using wheat flour, something that increased her followers and customer base.

Skik also suffers from long hours of power cuts, which cause many of her products that need preservation in the fridge to go bad. She also complains of the difficulty to deliver to the West Bank.

The 2019 PCBS statistics indicate that the number of Palestinian university graduates reached 40,000 in both Gaza and the West Bank, while the local Palestinian market offers only 8,000 jobs for graduates between the ages of 20 and 29.

For his part, Moein Rajb, a professor of economics at Al-Azhar University, told Al-Monitor, “In light of the dire economic situation and the high number of jobless graduates, many young men and women are looking for a source of income in the search for traditional jobs and private projects.”

“The small projects that are being marketed through social media do not require large capitals and could help reduce unemployment rates. Individuals could also take online e-marketing courses to better promote their products, which is completely different from the traditional sales process,” he added.