Egypt's middle class gets creative to cope with economic crunch

As Egypt's economy suffers and inflation soars, middle class citizens are turning to Airbnb, Uber and other nontraditional means of earning extra income. 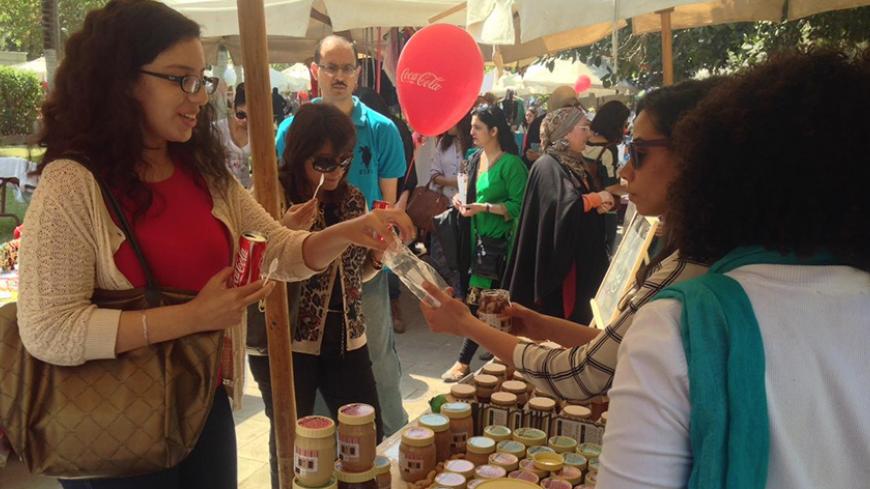 Samples are given out of Fino peanut butter at a fair in Cairo, Egypt, in this photo uploaded March 24, 2014. - Facebook/finosnutbutters

“A year ago, I never would have envisioned myself sharing my home with a complete stranger, but desperate situations demand desperate measures,” Sherine Moustafa, a 45-year-old hotel sales executive and divorcee, told Al-Monitor.

Struggling to cope with the soaring prices of goods and services prompted by the November 2016 flotation of the Egyptian pound and successive cuts in fuel subsidies, Sherine has had to look for new and innovative ways to boost her income. Since April, she has been renting out her spare bedroom through the holiday rental website Airbnb.

“Before the harsh austerity measures, I lived comfortably and could even put some money aside for an emergency. But I found it increasingly difficult to manage my budget; my paycheck hardly covered the essentials and I was often broke by the middle of the month. It was nerve-wracking,” she recalled.

The measures, part of an economic reform program that secured Egypt a $12 billion International Monetary Fund (IMF) bailout loan over three years, pushed inflation to its highest level in three decades (31.5% in April), making daily life tough for ordinary Egyptians. The price of cooking gas has doubled while fuel prices increased by 50% in June. Government officials have described the IMF loan as a "lifeline for the economy,” which was battered by the unrest that followed the 2011 uprising against Hosni Mubarak, and have repeatedly urged Egyptians to be patient in the face of painful but “necessary” reforms that are supposed to be beneficial in the long term.

While the price hikes and rampant inflation have hit Egypt’s poor the hardest, educated middle-class citizens such as Sherine have also been feeling the pinch and have been forced to adjust their spending habits.

“I was having to make do without a lot of luxury items and was always checking and comparing prices before buying anything,” she told Al-Monitor. But despite spending carefully, Sherine’s salary fell well short of her expenses, so she came up with the idea of opening up her home to travelers for a few days each month. By renting out her guestroom on the hospitality service site, she has turned her adversity into advantage.

Sherine was encouraged by the fact that visitors seeking short-term rentals can undergo an ID verification process that allows Airbnb to access their social media profiles. “Moreover, reviews of the guests written by previous hosts are often helpful when deciding whether or not to take them in,” she said.

The Airbnb culture is fast gaining momentum in Egypt and is particularly popular among the more Westernized residents of Cairo’s elite neighborhoods such as Zamalek and Maadi (where Sherine resides). Hundreds of properties in Egypt are listed on the international vacation rental site, including scores of private rooms at prices starting from as little as $11 a night. While the rental rates are low compared with other countries, Sherine said her earnings from Airbnb have gone a long way in easing her financial difficulties. The current exchange rate is about 18 Egyptian pounds to the dollar; it was around 9 when the pound was floated.

Like Sherine, many young, educated Egyptians of her social class are avidly seeking — sometimes unconventionally — ways of boosting their monthly earnings. Sherine Tawfik — nicknamed Fino by her friends — is a 35-year-old political science graduate who has created her own culinary brand of nut butters. Her “Fino’s Nut Butter” Facebook page says the foodstuffs are “as healthy as they are delicious.”

“I used to make my own peanut butter for breakfast. My neighbors and friends started asking me to make them some; they kept coming back for more and shared it with their friends and relatives. So I decided to turn it into a business,” Fino told Al-Monitor.

Fino markets her products on Facebook (her page is liked by more than 12,000 people) and Instagram because “for the little cost, the outreach is tremendous.” Customers can choose from a wide range of homemade organic butters, some tailor-made to suit their taste. From crunchy or creamy almond butter to a mixed-nuts spread, the butters sell at between 45 Egyptian pounds (approximately $2.50) for 350 grams of peanut butter and 200 Egyptian pounds for 550 grams of hazelnut cocoa butter or mixed nut-butter consisting of almonds, hazelnuts and cashews. The nut butters can be delivered right to the customer’s doorstep. While the declared aim of her startup is “to give consumers a healthy alternative to butters that contain harmful preservatives,” Fino is fortunate to have found profit in her passion.

“My finances are not quite solid yet, but the business is sustaining itself and is helping me get through this challenging time,” she said.

The internet has opened up a world of opportunity for many young Egyptian entrepreneurs marketing their products and services online, from the sales of secondhand clothes and books to promoting guided walking tours. Also gaining popularity as vehicles to make money are mobile stores and mobile restaurants. Colorful vans and bikes parked on street corners have become a common sight in Cairo’s affluent residential suburbs and sell all kinds of wares, from homemade kunafa (a Middle Eastern pastry soaked in syrup) and sushi to traditional handicrafts. For young cash-strapped entrepreneurs who want to start their own culinary business, the vehicles are more affordable than owning a restaurant and also take the food right up to the customer.

A vigorous advertising campaign with the slogan "Talaat Harb is back" is meanwhile encouraging young people to obtain loans for their startups from Bank Misr, nationalized in 1960. Images of Harb, the industrialist who founded the bank in 1920 that would later finance Egypt’s grand development projects under President Gamal Abdel Nasser, are plastered on giant billboards on the streets of downtown Cairo and are meant to stoke nationalistic sentiment, enticing young people to start their own small enterprises rather than seek “lesser” jobs with meager wages overseas.

Ahmed K., a 32-year-old tax accountant, is engaged and he and his fiancee are planning their wedding in mid-November. Financial pressures, however, almost prompted him to call off the wedding. The eldest of four sons, Ahmed is helping his widowed mother provide for his younger siblings.

“I was drowning in debt and nearly broke off my engagement last year. How was I to fend for a family when the little that remained from my salary after I’d paid the rent and electricity bills could barely cover the cost of my cigarettes?” he told Al-Monitor.

But that was before he decided to work extra hours as an Uber driver.

“I saw an online ad that said I could earn money on my own terms. The part-time driving job is ideal for me as it gives me the flexibility to work as much or as little as I can — on average four hours a day on weekdays and at least eight hours on public holidays and weekends,” Ahmed said.

Since taking on the part-time job eight months ago, Ahmed — one of an estimated 50,000 Uber drivers in the country — has not only paid off his debts but has also managed to save some money for his wedding and other marital expenses. While Ahmed does not own the car he drives, he is now contemplating buying one through a new five-year installment plan offered by Uber.

In these trying times in Egypt, many young middle-class citizens are learning to cope under duress. Rather than dwell on their misfortunes, they are seeking new opportunities in the hope that when the crisis eases, they will have carved a niche for themselves in their respective fields. Many more, however, are slipping into poverty and wonder how long it will be before the government's reform program bears fruit. As Egyptians' patience wears thin, economists warn that the reforms are a "high-stakes gamble" that could erode the government's support long before the economy begins to show signs of recovery.